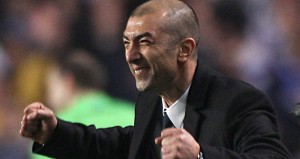 Despite his perennial stance on public speaking, Roman Abramovich’s thoughts on who he wanted to take the reigns at Stamford Bridge on a permanent basis this summer were undeniably clear.

The 2011/2012 season brought one of the most turbulent campaigns ever to West London – from the miserable loss at St Andrews to being crowned European champions in Berlin – the season ended with an only too familiar problem for those at Chelsea, a managerial vacancy.

June saw Roberto Di Matteo installed, as Chelsea Manager on a permanent basis, after an interim period saw him bring the FA Cup and the all too desired Champions League trophy to SW6. There are those, particularly fans that looked upon the four-week delay in appointing Di Matteo as discourteous. Certainly the fact that he had managed to win what Abramovich so craved should have permitted a contract immediately, though the following weeks saw the Chelsea all too publically touting ex-Barcelona coach Pep Guardiola, a candidate which has further affected the contract that the Italian has been provided with.

Roberto Di Matteo took over from AVB’s disgruntled and underachieving squad and to elegantly lead the side to win from a domestic perspective and the biggest prize of them all – the Champions League, the one Roman Abramovich demanded so much and ultimately one that the likes of Jose Mourinho, Guus Hiddink and Carlo Ancelotti had in one way or another lost their jobs for – yet, despite delivering the all important ‘Big Ears’, the much loved Italian has only done enough to be awarded a 24 month contract. Awarded, indeed.

Pep Guardiola’s suborn stance in taking a sabbatical has meant that Roman Abramovich will have, no doubt, missed out on his ideal management setup for next season, but his pretentious approach to employment will undoubtedly signify a goodbye for RDM when the Spaniard decides he wants back into the European elite.

Inevitability is a word that can easily be deployed in this situation, and Di Matteo will realise it too, though you can be sure he will take to the job in the same dignified manner that he has done since he took over from Andre Villas-Boas in March.

Roberto Di Matteo knows the club, loves the club and will ultimately do anything that will better Chelsea FC – but ultimately he too needs to win from this arrangement, which is why he will look on with anticipation to next season with the full backing of his squad, makes changes how he sees fit and ultimately mould a perception of his managerial ability so when the time does come, and Pep Guardiola is finally seduced to West London, he can look upon a number of opportunities to which his achievements merit.