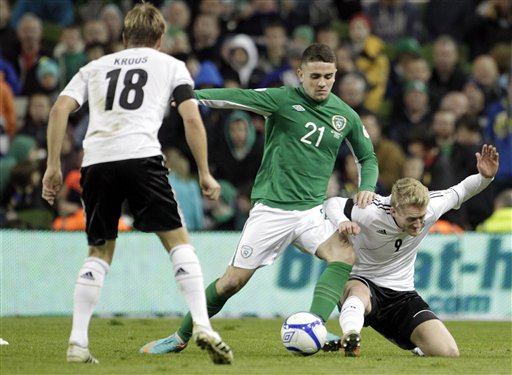 If anyone needed confirmation just how taken for granted the McCarthy-moulded generation were in Ireland’s respectability over the past decade, Germany’s 1-6 mauling on 12 October was the perfect evidence.

Sure, much can be made of Giovanni Trapattoni not assimilating Seamus Coleman and James McCarthy sooner – and the omission of Ciaran Clark and, possibly, Mark Wilson – but apart from starting Shane Long ahead of Simon Cox, the Italian, arguably, selected one of the most agreeable first XIs in his turmoil-filled past nine months as Ireland manager.

In contrast, incredibly, after Euro 2012, many Irish fans seemed exasperated with Shay Given (lethargy) and Robbie Keane (seemingly bereft of enthusiasm, despite lack of service) in particular – even if Trapattoni’s tactics were, admittedly, still the overwhelming sticking point. However, given some of Kieron Westwood’s delayed reactions and Andy Keogh’s dalliance late on against Die Mannschaft, when Robbie Brady played him through, it is clear that Ireland will struggle in the coming months – and that is without addressing the unnerving absence of a leader on the field.

After the 1-6 humbling, Aiden McGeady touched on this regression of the Irish set-up since 2010, coincidentally when Given, Richard Dunne, Damien Duff and Keane were all still pivotal to Ireland’s success:

A couple of years ago, we might have been able to get something out of this game. We played against Italy, France and teams like that and we always did OK. What’s different? Possibly the way we play, I don’t know … It’s difficult to say but I just know there is a difference. Just look at the results. A couple of years ago, we were unbeaten in a good few games. We were playing some of the top teams and we were drawing or almost sneaking wins. Against Germany, we just got put to the sword.

Maybe something has got to change in the way we play … possibly putting more onus on us having the ball, instead of playing for flick-ons and second balls. We changed to 4-3-3 against Germany but we never really had the ball and when we did, it was two, three passes and then going long. It doesn’t really suit how that system is supposed to work.

Of course, Dunne and Keane will be back, but it is clear, owed to persistent back problems and flagging darting pace respectively, that the duo, of their own volition, are imminently approaching the end of their international careers. From this, for the first time in his four-year spell as Ireland manager, Trapattoni has been forced to look at alternatives to Given, Dunne, Duff and Keane, and in his selection of Westwood, Darren O’Dea, Jonathan Walters and Cox against Germany on 12 October, the Italian seemed to have made his decision.

While the above-mentioned certainly lack zest, cemented fan affinity (Walters apart) and the standing of the men they replaced, it seemed to outsiders that the injury of James McClean did not help matters. However, Trapattoni still does not trust the Derryman – accentuated by the Twitter scandal after the winger was not utilised against Kazakhstan on 7 September  – despite him being, arguably, Ireland’s most exciting, yet consistent, footballer and a zealous harrier without possession.

Also, with McGeady’s chronic inconsistency – encapsulated in the twenty-six year old’s encouraging start and embracement of the occasion against Germany, but then badly fading, forgetting his defensive obligations and leaving to a chorus of mild boos – it is clear that even Ireland’s only representative in European footballing competitions is unlikely to take international games by storm in the future.

Therefore, the baton will pass to one of Ireland’s most accomplished and well-rounded underage footballers since Duff in 1998, Robbie Brady. Having played for Ireland’s Under-17s, Under-19s and Under-21s since 2005 – and having scored an Irish Under-21 record of seven goals in eleven games – Brady is of a rare breed in the current Ireland squad: a proven underage graduate.

Also, it is no coincidence that since his promotion to the Under-21s by the then newly-installed Noel King in September, 2010, Ireland’s results have drastically improved and the team’s progression has been stark. After all, having claimed just three points from a possible fifteen under Don Givens against Georgia, Estonia, Armenia, Switzerland and Turkey in Group Two of the 2011 UEFA Under-21 football qualifiers, King was appointed as Givens’ replacement mid-way through qualification.

This took the immediate pressure off King and he sought to assimilate Brady with the likes of Coleman, McCarthy, Conor Clifford, Sean Murray, Samir Carruthers, Aaron Doran and Anthony Stokes over the following two seasons. As a result, Brady has prospered and not looked back: helping Ireland’s Under-21s finish a drastically-improved third behind Turkey and Italy in Group Two of the 2013 European Championship qualifiers.

Ironically, though, for Ireland’s Under-21s greatest away performance for decades, in the 2-4 victory over Italy on 10 September, 2012, Brady was absent. This was not because of injury or club commitments with Manchester United, though; rather, it was because Trapattoni took the fairly unusual step, in his four-year tenure so far, of basing his selection on underage performances in calling Brady up for the friendly against Oman on 10 September.

Of course, this was a huge part of Brian Kerr’s make-up when he was Irish manager between 2003 and 2005, but with Trapattoni’s controversial, tape-centered scouting analysis of players playing in England, it was a bold move and perhaps perfect evidence of the fact that even Trapattoni’s stubborn, age-old habits were pierced by Brady’s emergence.

While to outsiders, this immense faith does not seem to be shared by Brady’s club boss, Sir Alex Ferguson at Manchester United, the Scot certainly views Brady, along with Marnick Vermijl, Scott Wotton, Michael Keane and Ryan Tuncliffe, as one United’s hottest reserve prospects. Also, given Ferguson’s half-tentativeness of late – in handing a first-team debut to the Tom Cleverley at twenty- two in 2011, after several loan spells – there is nothing to suggest that Brady will not be a full-time member of the first-team squad from 2013/2014 onward.

Where he could play for United remains a quandary, though, as with Nani and Ashley Young ahead of him in the pecking order on the left-wing, Ferguson seems to see Brady, who is a decent tackler and adept in the air for his size, as a potential left-back – even with the twenty-three year old Alexander Büttner’s recent arrival from Vitesse. In contrast, ironically, the usually-defensive minded Trapattoni clearly values Brady’s attacking qualities, namely his directness, speed, personality, adeptness with either foot, set-piece prowess and shielding strength. 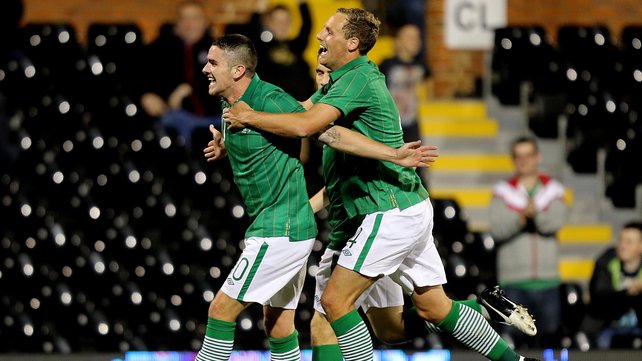 The twenty-year old’s debut against Oman on 12 September showcased all of the above-mentioned, with the winger sending in a perfectly-aimed, looping forty-yard free-kick from the right byline for Sean St.Ledger to head across to Long from the near post on 7’. Then, on 23’, Brady hit a brilliant low volley with his weaker foot, after Oman failed to clear their lines. Capping a man of the match display after a bare half an hour of his senior international debut, Brady sent in  a whipped, thirty-yard free-kick from the left byline for Kevin Doyle to score with a header on 36’.

It must be noted that the opposition was, admittedly, Oman, in front of just over 400 supporters at Craven Cottege but just days earlier in a desperate 1-2 victory over Kazakhstan on 7 September, Ireland had been seriously bereft of the initiative, confidence and daring that Brady encapsulated in the first-half of the Oman match in particular. It seemed, for once, a Trapattoni experiment with Ireland was an undoubted success for the fans, players, tactics and backroom staff alike, but in believing Brady needed “experience” before a competitive start against Germany, Trapattoni accentuated Brady’s qualities in inadvertently juxtaposing his nine-minute display with a woeful overall performance by his well-capped teammates.

Yes it was only nine minutes and the Germans were complacent, but Brady looked far from out of his depth in taking on, and beating, Marcel Schmelzer in in one-on-one situations. Also, his set-piece delivery – such a crucial crux of Trapattoni’s success with Ireland between 2008 and 2010 in particular – was hit with pinpoint accuracy for Keogh’s scant consolation goal on 92’.

Therefore, in handing Brady his first competitive, senior international start, against the Faroe Islands on 16 October, it seems inevitable that Brady will make the international breakthrough and, perhaps, the twenty-year old is the perfect example of Trapattoni’s scattered logic as Ireland manager. After all, McClean, one of Ireland’s few guaranteed Premier League starters and a man who went through incredible sectarian abuse to declare for Ireland in 2011, has now been usurped by, on paper, a reserve for Manchester United.

That statement would be a disservice to Brady’s impeccable attitude, fantastic underage performances and brave senior displays, though, and it seems – with Ferguson clearly rating the twenty-year old, after rejecting recent loan bids from Nottingham Forest, Wolves and Burnley – the Irishman will firmly be the beacon of hope in what promises to be an immensely difficult upcoming decade for Ireland.