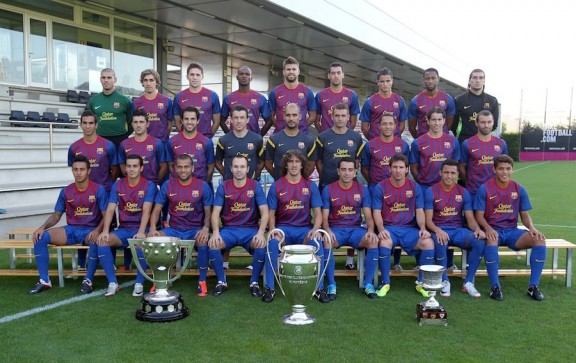 A recent article on BackPageFootball about FC Barcelona and Real Madrid monopoly over La Liga and their predicted domination in Champions League churned the thought process in my head. Is this going to be the year where the current champions retain their crown for the first time since the Champions League was established? Or would this be the year when Real Madrid gets their la decima Champions League trophy. Being a Barcelona fan, I would like the former but even an ardent fan like me has his doubts. Why? You may ask. There are at least a couple reasons causing this worry. Please let me list each one of them with as much supporting evidence as I can for you to conclude and hope for the best against growing suspicion.

This summer has finally seen the conclusion of one of the longest drawn out transfer saga in the history of European football. I believe nobody needs any introduction to the Cesc Fabregas transfer episode. We also got reinforcement in the attack in the form of Alexis Sanchez for the departing duo of Bojan and Jefferen. So essentially we have four forwards, Messi, Villa, Pedro and Alexis for three starting berth. For midfield, we have Xavi, Cesc, Iniesta, Thiago, Keita, Afellay, Busquets and Mascherano to start the three midfield positions. But what about defense? We lost one more central defender in Gabi Milito this summer, continuing the trend of attrition of central defenders. So we are left with Puyol, Pique and Abidal for central defense. Alves, Maxwell and Adriano for the right and left back positions.

From the above roster, even after including a few more youngsters from Barca B, we can clearly see the number of players Barca has at its disposal at least until the winter transfer window is pretty tiny.  There are at least a couple of reasons for that. One, Barca has one of the most expensive payrolls amongst the top footballing teams in the world. With more players comes increased payout from the club’s coffers. They can neither afford that nor ship out any of their high earning players deemed not worthy. Ibra comes into mind here. Secondly, Barca posses one of the most versatile squad again. Not a single player in the team consistently plays one particular role for a given season. This gives them the flexibility to move players from one area of the field to the other without destabilizing the squad harmonics.

For a brief moment, let’s look at the squad and the flexibility that they posses (see image right). 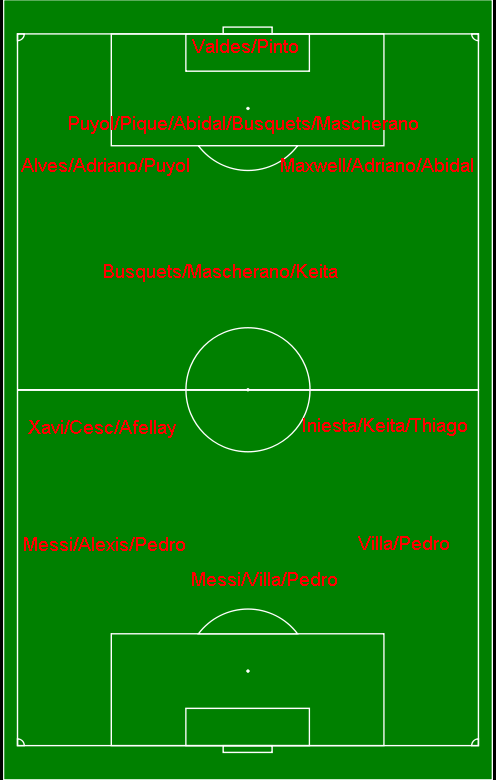 On the first glance, Barca seems to have enough cover on all possible positions except for maybe the forward line.  We will get to that in a little bit. Let’s look at the defense in depth. With five options for a central defense pairing and 3 options each for right and left back Barca seems comfortable in this position. They have the flexibility to play their defenders and defensive midfielders all across defense and perform admirably at the same time as well. But in this flexibility lies the problem. There are only three true central defenders. Busquets and Mascherano have done well when employed but are error prone at times. Busquets is slow and Mascherano has a height disadvantage from set pieces and high balls. Secondly in the last season, both Puyol and Abidal were out injured for long periods of time and a continuous run for either Busquets or Mascherano at defense has a chance to backfire for the La Liga Champions.

The right and left back regions seem relatively comfortable as long as Alves, Abidal and Adriano remain fit throughout the entire season. Injury to two of the above three could prove disastrous for Barca. Barca has traditionally been vulnerable down the flanks on counter attacks. With Alves found out of positions due to his attacking duties/endeavors , Maxwell’s erratic defensive displays compounded with the single pivot in the form of Busquets/Mascherano has been the highest source of goals against Barca. Abidal would be the first option in the left, but if and when he moves to the centre, Adriano should take precedence over Maxwell. Maxwell did a decent job in his first season but was either too slow or positionally unreliable in the last season. Though Adriano started slow, he did a great job on the left throughout the end of last season. And with only Adriano being the backup for Alves, things could get a little Messy in defense for Barca if injuries take their toll. One bright spot I would like to point out for Barca rear guard has to be Abidal. His assured performances, be it at left back or partnering Pique, have bailed out Barca on several occasions and I hope the same continues.

The midfield on the brighter side seems to be in a much more comfortable position this season than last. With Cesc coming in and Thiago’s rapid rise to stardom, and the still immensely talented yet untested Afellay in ranks, there is plenty of depth with each individual capable of changing the game in blink of an eye. Again an injury in defense and to one of Mascherano or Busquets can cause a little bit of a headache for Pep with only Keita capable of doing the defensive midfield duties but yet untested in that role in big games. Oriol Romeu would have been a good option here to keep and groom during the Copa games but that chapter is closed with Chelsea winning the battle. And also a point to note here is all three of Alves, Adriano and Maxwell have been employed in midfield with varying degree of success. Don’t expect that to happen too often or very consistently this season with both Afellay and Thiago comfortable playing wide and eager to prove a point.

The attack seems a little thin as well considering only one arrival came in the form of Alexis in place of the two departing Bojan and Jeffren.  Though Jeffren was more on the injury table than on field and Bojan missing a host of opportunity to shine, there were chances that either of them could step up their game and be the next Blaugrana superstars. With only four true forwards, injury to a couple would force Iniesta to move forward and a lack of game changer on the bench for Barca. Considering that 31 of Barca’s 95 goals came from Messi, someone has to step up to the plate if injury strikes the diminutive Argentine wizard. Pep is hoping to put that faith in Alexis. Both Villa and Pedro are deadly strikers but neither of them have the skills to open up a game and provide. In the absence of Messi, a lot of that creative spark would fall on Iniesta and if pre season and Super Cup are any indication of his undoubted ability and form, Iniesta is likely to shine much brighter than all his previous seasons put together.

I would also like to point out the achievement of this team and its individuals over the past few years. The core of the team including Xavi, Iniesta, Puyol and Messi have each won at least five league titles, three Champions League title, five Spanish super cups, a UEFA Super Cup and a Club World Cup. Apart from this, the majority of team has won the last three La Liga titles along with the last two Champions League that Barca won. There are only two players who have not won any big title at club level and they are Cesc and Alexis. Hence motivation becomes a factor. This is something Barca experienced with Ronaldinho and Deco. With every team and coach, there is a cycle of winning and losing and this becomes a problem unless the squad and its spirits are constantly renewed. There are exceptions to this. Manchester United comes into mind here. But even Sir Alex constantly renews his team by shipping new players in and out of the team to keep motivation levels up. With that in mind though, Pep seems to have still kept the majority of the squad same with very little squad renewal this summer. In spite of this and all the achievements under him, we saw the same old Barca with a lot of motivation fighting for the Spanish Super Cup against a rival that seemed to need that trophy more than Barca. The other players like Fontas, Thiago and Afellay had only little contributions in the previous campaigns and will hope to step up to the occasion to stamp their style and signature on Barca’s achievement. But if senior members of the team do not show the commitment that expected out of them, replicating the previous year’s success would be hard to come.

With all said and done, preseason and Super Cup was still promising for Barca with only the defense looking a little rusty. With Puyol coming back in the squad and general increased match fitness, expect the defensive lapses to get fixed. And with no change in the attitudes of Messi, Villa, Iniesta and co. and Cesc coming in to cover the ageing and tiring Xavi, attitude does not seem to be a problem as of now. But as the saying goes, it’s not over till the old lady sings. Hold on to your seats, it seems like we are going to have another thrilling season in Spanish football this year.

3 thoughts on “Risky strategy by the reigning champions”