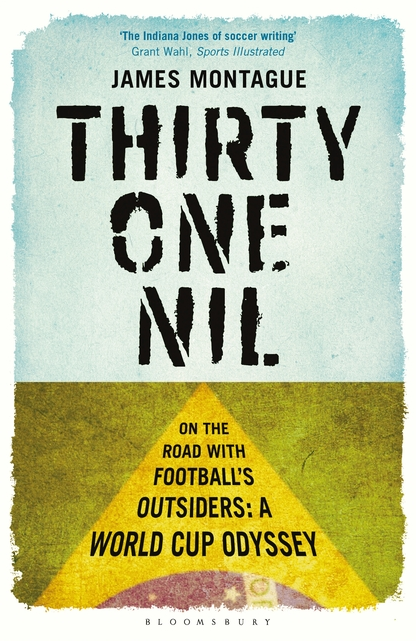 However, James Montague’s new book, Thirty-One Nil, is a vibrant and colourful citrus injection that will leave every reader realising why football is so loved, and why the stories concerning agents, disgruntled players and absent birthday cakes aren’t needed. Thirty-One Nil sees Montague travel the world to attend the early qualifying rounds for the World Cup in Brazil, illustrating that the majority of players who represent their nations do it out of pride and personal vocations rather than because they’re entwined in the money machine.

Every chapter demonstrates another case in which the twenty-two players on the pitch are looking to gain a place at the World Cup in order to offer some relief to their fellow countrymen or erase personal demons. From the Palestinian’s looking for recognition in Tajikistan against Afghanistan, to the Eritreans looking for a new home in Rwanda and the Haitians hoping to litter their country with happiness against the US Virgin Islands, every story is brilliantly illustrated by Montague due to his diligent questioning and expert knowledge of the political and social pressures being exerted on the national teams involved.

Thirty-One Nil will take English football fans into a world which couldn’t be more different to the sanitised footballing sphere they occupy. During the Hungary and Romania qualifier, it is clear that international football has become the tool of nationalist political parties and Montague puts his life on the line in order to hear the voice of the people promoting it, while in Tahiti, their chance to compete at the Confederations Cup was used as an opportunity to display their culture and extend friendship to the superstars of Spain.

The only criticism which could be levelled at James Montague’s previous book, When Friday Comes, is that a journey through Middle Eastern football involves many of the same things (such as lack of funding, religious division and extreme political tension) and can become repetitive, but Thirty-One Nil provides an abundant collection of tales from countries and cultures all over the globe. His ability to forge strong relationships with footballers in every continent means that the personal demons of every individual, such as the American Samoan goalkeeper Nicky Salapu, flow onto the page and cannot fail to bring a lump to the throat.

Montague and Thirty-One Nil is a brilliant read and will do more to help rekindle fan’s love with international football more than any of the ever increasingly ludicrous policies and memos of FIFA. The only clear contribution by the organisation to global football at the lowest level is to insist that their anthem be played in the build up to every match. By the end, every reader will begin to loathe the ever present tune and much as Montague.