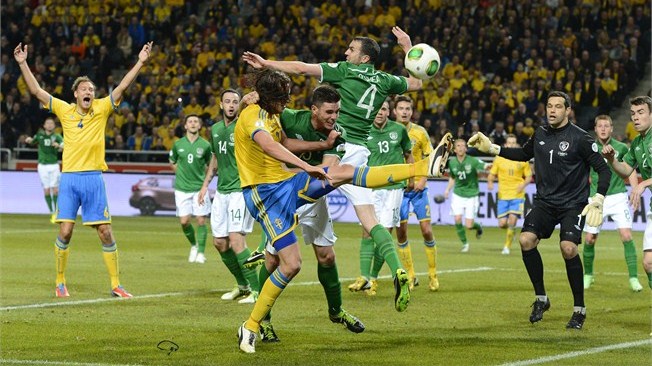 Stoke City’s Marc Wilson appears to have recovered from a foot injury and should be ready to start Friday night’s pivotal World Cup qualifier with Sweden.

The make up of the home side’s starting XI is taking shape with Richard Dunne set to start at the heart of the defence and David Forde likely to retake his place in goal having been injured for the recent qualifier in Wales.

When Ireland played Sweden in Stockholm last March, James McCarthy wasn’t even in manager Giovanni Trapattoni’s starting XI. An injury to Glenn Whelan though saw the Glasgow native take his place in the team and he has been a mainstay in the starting line-up ever since.

Following much debate as to his interest in representing the Republic of Ireland, Blackburn native Anthony Pilkington has reiterated his commitment to the Irish cause ahead of Friday’s crucial game.

The Norwich City man has had to withdraw from previous international squads on five occasions due to injury, drawing criticism in some quarters over his dedication to the country.

However, Pilkington has insisted his reasons for being unavailable were genuine.

“People need to realise that I had injuries,” the 25-year-old said. “Obviously I can see why people started talking, but I would have been no good to anybody. I wouldn’t be helping myself or my country.

“I was always committed. The first time I had to pull out, my bags were packed ready to come over. We had a morning game (for Norwich), we were due to fly out after the game and I got injured during the game.

Friday’s meeting with Sweden represents the first part of a vital double-header for Giovanni Trapattoni’s side, with Republic of Ireland set to travel to Vienna to play Austria on Tuesday.

After six matches, Trapattoni’s men, Sweden and Austria all have 11 points in Group C and with Germany leading the way on 16 points, it seems likely that the trio are fighting it out for one of the eight play-off spots to reach Brazil 2014.

Sweden defender Andreas Granqvist is suspended for the match in Dublin and he is likely to be replaced by Gothenburg’s Adam Johansson at the back, but Fulham midfielder Alex Kačaniklić is available after injury.

After Friday’s game, Erik Hamren’s side travel to Kazakhstan and the coach is well aware of the challenges his side are set to face.

“It will be a tough match away to Ireland,” he said. “They are hard to beat. Kazakhstan will also be a tough match. They would have beaten Ireland but for two late goals, and Austria drew 0-0 there so we are under no illusions.”

The Swedes have no fresh injury concerns going into the match, meaning that Zlatan Ibrahimović  will lead the line alongside Norwich new boy Johan Elmander.

Sweden know that if they were to draw with Ireland and Germany beat Austria on Friday night, then the Scandinavians would be in pole position for second spot. But considering the fact that they have only beaten minnows thus far, it is critical that Sweden also try and edge a victory in Dublin. Manager Erik Hamren has urged his side to go for the win; not wanting to rely too heavily on other teams slipping up later.

Lustig and Johansson will try to contain the excellent Everton flying full-back Séamus Coleman and Wilson respectively. Midfielder Sebastian Larsson could be the man to open up the Irish defence with precision passing as well as his dead ball proficiency. Injury to Rasmus Elm could prove costly as Hamren reshuffles his midfield combinations. Alexander Kačaniklić could also offer some attacking flair to a team with a rather workmanlike composition as he returns to the squad. But the real threat the Swedes pose hinges on whether Ibrahimović and Elmander can disrupt O’Shea and Dunne sufficiently.

Likely to be a tight, no holds barred, feisty affair and very similar to a blood and thunder Premier League game. Trapattoni will be advised not to play his typical long ball game as the giant Swedish back four (the Swedish starting XI is likely to have five players 6’4″ or taller) will swallow up those sorts of balls. This is the sort of game where the crowd could make a difference and if the crowd show up in sufficient numbers and get behind the home side, it could be a great night in Dublin with the home side possibly coming out the right side of a tight scoreline.

One thought on “Republic of Ireland v Sweden: Team News and Preview”