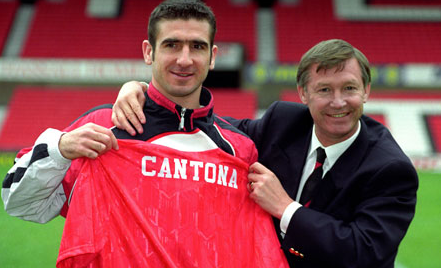 Many would assess Sir Alex Ferguson’s signing of Eric Cantona twenty years ago as his greatest piece of transfer business, capturing the unpredictable Frenchman off near rivals, Leeds United. Arguably there have been more gifted players in the red of Manchester United but very few have had the impact and legacy of Cantona.

A catalyst for United’s first league title for 26 years that inspired a dominance of the domestic game, the Manchester United team of the nineties was built around this man. Though his spell was brief, retiring in 1997 after five years at the club, his influence was so key that players are still bought on the notion that they may be the next Cantona. But who, out of his supposed successors, have actually had the influence that he had?

The signing of Sheringham from Tottenham Hotspur was hardly the compensation United fans would have hoped for to soften the blow of Cantona’s unexpected retirement. Many star names, from Gabriel Batistuta to Ronaldo, were circulating the rumour mills, yet it was the cheaper Sheringham who was signed in a move that suggested that expense, rather than talent, was the chairman Marin Edward’s main concern. Sheringham had been a successful league player and deserved his place in the England team but he lacked the ‘wow’factor that United had lost with Cantona’s departure. Though skilful and intelligent, Sheringham was constantly overshadowed by better players, whether it was Alan Shearer for England or Jurgen Klinsmann for Tottenham. At 31, he was not a young, promising prospect either.

His debut, coincidentally, featured him missing a penalty against Spurs. Immediately, he had failed where his predecessor rarely did. He scored his first goal four games later against Everton but only scored one more league goal up to November. He rarely suggested that he was capable of taking Cantona’s talismanic role, and was closest in doing so by scoring a brace away to Arsenal but even that was in vain in a 3-2 defeat.

Sheringham has gone down in United folklore due to his injury-time equaliser against Bayern Munich in the 1999 Champions League Final and he did have a superb final season for United in 2000-01, scoring a goal every two games on the way to being voted PFA Player of the Year. But in terms of replacing Cantona, Sheringham was never suited and this was proven by the signing of Dwight Yorke only a year after. Yorke had more in common with Cantona than just his upright collar. He had a confidence that could create goals from out-of-nothing. He, though, could never be compared with Cantona as Yorke’s influence in that Treble team was still less than many of his teammates, notably Roy Keane, David Beckham and Jaap Stam.

Cantona was not just a striker, hence his comparison with a midfielder. Cantona could play anywhere he demanded and could orchestrate moves wherever he felt necessary. Splashing the cash in a way opposite to the Sheringham move, Veron was a showcase signing that Ferguson hoped would propel United to a consistently high level in Europe. Possibly relaxed into complacency by the poor standard of the Premiership, United had not been challenged enough for their three titles in a row between 1999-2001 so often struggled to adapt to the more difficult task of European football. Real Madrid, for example, seemed that bit better. So Ferguson reacted and bought Argentine, Veron from Lazio.

There were two problems. Cantona played a free-role just ahead of a brilliant midfield of Ryan Giggs, Roy Keane, Paul Ince and Andrei Kanchelskis with ease. Veron was expected to figure-head an arguably even better midfield of Giggs, Keane, Paul Scholes and David Beckham. He did not find this easy. More tempted to drop to midfield, Paul Scholes was sacrificed and would often find himself out of his comfort zone. Veron did not have enough attacking force to play this role and instead hampered a brilliantly functioning midfield. Ferguson had forgotten the cliché of not needing to fix something that wasn’t broken, and United could not function with this new style in the League, surrendering their title to Arsenal. Veron, and this style, was better in Europe but United stumbled out at the semi-finals on away goals to Bayer Leverkusen.

Secondly, Veron was not actually the type of player Cantona was. Veron was the archetypal, clichéd foreigner who looked uncomfortable on a cold, January night in Blackburn. Whilst Cantona could rough it in the English game, Veron couldn’t. He was someone more content in the weather of South America or the pace of the league he had just left, and did not understand the demands of playing in England. Consequently, Veron was one of Ferguson’s biggest transfer flops and a huge disappointment considering his renowned skill before the move.

Strictly speaking, it is unfair to compare Ronaldo to Cantona. When he was bought from Sporting Lisbon, as a raw yet promising winger, no-one would label him as the next Cantona and rightly so. But after three years of glimmers of skill and plenty of step-overs, Ronaldo emerged from the World Cup of 2006 as the closest player United have had to Cantona since his retirement. The three years after that tournament until his departure to Madrid, was a showcase of his influential talent. Though brilliant players such as Bryan Robson and Steve Coppell had worn the number 7 shirt with distinction, Cantona made it iconic. Beckham served it very well but only Ronaldo has done it true justice since. His ability to score goals out of nowhere, carry a team and overall play with an swagger and arrogance meant that Ronaldo is the closest attacking player to rival Cantona in Ferguson’s era, in terms of influence and impact on a team. They can compare closely in their popularity amongst their teammates, preferential treatment from Ferguson and their irreplacable talismanic nature. They both sulked many times, yet whilst Cantona’s could spill over into violence, Ronaldo would cry or throw a bib. There are also parallels with their lamentable departures. The replacement of £80 million Ronaldo with free-transfer Michael Owen echoed the cost-cutting move of Sheringham for Cantona twelve years prior.

An immediate misconception could be that Cantona’s arrogance implied that he did not feel that he had to try on the football field; that he appeared superior to the other 21 players. Cantona’s effort was never doubted and though he would romanticise about the beautiful game, especially in Nike adverts, he would never shy away from scrappy goals, bustling challenges or getting stuck-in. Though he had the ability to flick and chip, he could also blast goals in with sheer power. Yes he could often control the pace of the game but he was also aware of the need for him to adapt to the speed and demands of the game also.

Berbatov’s coolness and presumed arrogance meant that when he was made United’s largest ever transfer buy, the parallels with Cantona were sought instantly. Unfortunately, these comparisons would soon fade. Capable of brilliant flicks, such as one to set up a Ronaldo goal against West Ham United, and with wonderful ball control, Berbatov simply could not score the goals that mattered. Whilst Cantona would score goals in two FA Cup Finals, Berbatov would miss a crucial penalty and two open-goals in FA Cup semis against Everton and Manchester City respectively. Whilst Cantona could adapt to the pace of the game, Berbatov slowed United down. Whilst Cantona could inspire younger players, Berbatov would just moan at them.

Even in his most successful season, winning the golden boot in 2011, Berbatov still did not have the stature that Cantona had, proven by not even being in the squad for the European Cup Final. Ultimately, whilst appearing arrogant, Berbatov never really had the confidence or character to be an important player at Old Trafford.

Van Persie has settled in well at Old Trafford but it is too premature to cast judgements on his overall record. He is the finished article and is a proven class-act, and his instant success with the United fans suggest that he has a demeanour similar to Cantona and the ability to handle the pressure that comes with the comparison.

The comparisons can be found with the nature of the transfers. There are some similarities, most notably that it was a surprising capture from one of United’s biggest rivals. Also, Ferguson may be tempted to mould a team around one player such is the importance of Van Persie. They are both forwards not necessarily restricted to the striker role and Van Persie could have an effect on youngsters just as Cantona did with the ‘class of ‘92’.

There are however, some key differences. Firstly when Cantona was purchased, United hadn’t tasted league success for over two decades. The signing of Cantona had brought someone into the dressing room who had actually won the league the season before with Leeds. He was a catalyst because United, a team not used to winning, needed a catalyst. Van Persie, despite being a proven goalscorer, has not won the league whilst many of the United team, (Giggs, Scholes, Rio Ferdinand, Nemanja Vidic, Patrice Evra, Michael Carrick, Wayne Rooney to name just some), have a much bigger trophy cabinet than the Dutchman.

When Ferguson signed Cantona, the finances in the League were so minute in comparison to today. It is tempting to think that whilst Cantona was signed as a marquee signing purely on the fact that he was a unique talent, the signing of Van Persie has been a marquee signing to convince the footballing world that United can still compete with the financial muscle of Manchester City. Ferguson, since Cantona, has built up young teams who can progress and improve. Building up a team around a striker in his late-twenties would oppose Ferguson’s previous work so seems unlikely. What is definite however, is that Ferguson would be keen for a short-term impact from Van Persie reminiscent of the one that Cantona so successfully had.