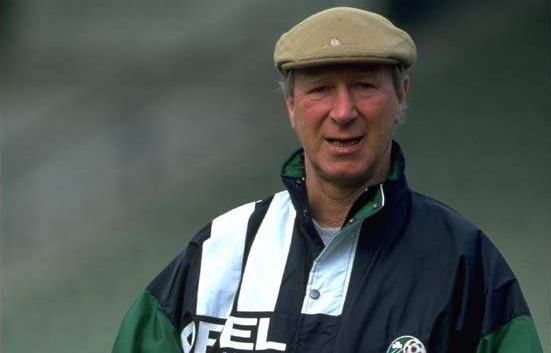 In the last Euros preview piece we looked at a couple of games from Ireland’s short, yet eventful footballing history with Georgia. Georgia emerged as an independent sporting nation after the break-up of the Soviet Union in the early 1990s but it would be 2003 before the Georgian and Irish national teams would first meet.

In Ireland’s next qualifier we meet a side with an even shorter international footballing history; Gibraltar, who are setting out on their maiden qualifying campaign.

In fact they have played a grand total of six international matches, only one of which, the recent 7-0 mauling at the hands of Poland was a competitive game. They are not yet an official member of FIFA and even the venue for their home matches remains to be finalised.

This is, however, not the first time that Ireland have found themselves in this situation. During the qualification for Euro ’96 when Jack Charlton’s Irish team faced off against the tiny mountain-top nation of Lichtenstein who were embarking on their debut in UEFA qualifying. And it wouldn’t take long before they would write their name into the annals of Irish footballing history.

Cast your mind back to the late summer of 1994. The Republic of Ireland have just returned home from a slightly underwhelming World Cup in the USA, the chaotic and jubilant homecoming scenes of four years previous are not to be repeated, the reception held for the team in Dublin’s Phoenix Park is respectful rather than uproarious. World Cup ’94 came with an air of anticipation around the Irish side after their adventures in Italy in 1990 and their qualification for the USA ahead of reigning European Champions Denmark.

After the scarcely believable victory over Italy in the opening game there followed a 2-1 reverse against Mexico in the sweltering Orlando heat and a stultifying draw with Norway. Once again Ireland had done just enough to get out of the group but were well beaten in the second round match against the Dutch. Packie Bonner, the hero at that stage four years earlier was at fault as Wim Jonk beat him from distance to give the Dutch a 2-0 victory.

It says something about the weight of expectation on the Irish team at this time that being knocked out in the second round of a World Cup was seen by some as underachieving, the wide eyed nativity of Euro ’88 and World Cup ’90 had given way to sense that Irish football had come of age and that we had both a right and an expectation to be at major tournaments. It was in this spirit that the Irish national team geared up for their Group 6 European qualifying games against Portugal, Austria, Northern Ireland, Latvia and bottom seeds Liechtenstein.

Qualification started with an encouraging 3-0 win over Latvia, coming from a John Aldridge brace and one from John Sheridan. The team was undergoing subtle changes too, Kevin Moran had retired and Phil Babb had impressed alongside Paul McGrath at the centre of defence.

Sheffield United’s Alan Kelly replaced Bonner in goal for his fourth cap while younger squad members like Gary Kelly and Jason McAteer also started. There was also a welcome return for Manchester City’s Niall Quinn who had missed the World Cup through injury. Next up was the home tie with Liechtenstein who had been comfortably beaten 4-1 by Northern Ireland in their own opening fixture.

The Republic would do even better than the North, when they faced Liechtenstein in October of 1994 they won the first tie 4-0, (a pair of goals each from Niall Quinn and Motherwell’s Tommy Coyne) Bonner returned to nets for his last competitive outing while Eddie McGoldrick got a rare start. So far so good for the Republic.

By the time they would face Liechtenstein again in June of 1995 Charlton’s team would be top of the group having destroyed Northern Ireland 4-0 in Windsor Park, drawing 1-1 with them in Lansdowne Road before going on to beat Portugal 1-0 in the home fixture. Liechtenstein on the other hand were rooted to the foot of the table and had just come off 7-0 and 8-0 maulings to Austria and Portugal respectively.

When the Republic of Ireland, seemingly rejuvenated after their Dutch exit in the World Cup lined up to face the majority amateur side from the mountain principality nobody could have expected that Liechtenstein were about to win their first ever competitive point against the group leaders.

Ireland lined up in their traditional 4-4-2 formation; Kelly started in goal, with a back four of Irwin, Gary Kelly, Babb and McGrath. John Sheridan and Ronnie Whelan (by then of Southend United and in for his first start of the campaign) were in the middle with McAteer and Staunton providing width and in theory, service to a front two of John Aldridge and Niall Quinn. Preferred midfielders Roy Keane, Ray Houghton and Andy Townsend were unavailable through injury but few thought it would matter against a side of mainly amateurs.

For Liechtenstein the eventual man of the match, goalkeeper Martin Heeb was a part-time groundsman in the Eschen-Mauren stadium where the match was played, he even remained on the pitch after the game to take down the nets. The one genuine player of quality within the Liechtenstein line-up was their forward Mario Frick, then at Swiss side St. Gallen. Remarkably Frick (now 40) is still an active squad member for Liechtenstein after a varied career that also took in spells in Serie A with Verona and Siena.

Apart from the evergreen Mario, perhaps Liechtenstein’s most notable footballer was Rainer Hasler who enjoyed some success with Neuchatel Xamax and Servette Geneva in the Swiss league during the 70s and 80s, (he was even briefly a team-mate of Ireland’s Don Givens at Neuchatel) however he never even got to compete for the principality in a competitive game. Such was the footballing calibre of the nation that Ireland faced.

Perhaps things would have gone differently had Quinn or Aldridge taken early chances that fell to them, there would be 36 shots by Ireland during the game in total! McAteer came close when his strike hit the post but the majority of Ireland’s efforts were thwarted by the brilliance of Heeb on the day. Manager Jack Charlton, seemingly at a tactical loss as to how to remedy the situation replaced right winger McAteer with full-back Jeff Kenna before making the radical change of swapping 6’4” Quinn for 6’3” Tony Cascarino. It was stated that Charlton’s half time team-talk consisted of the words:

There’s nothing I can do for you. You’ll have to work this one out for yourselves.

Hardly inspiring stuff from Big Jack. As a child of the 80s watching the game was a strange and disconcerting experience for me. Personal experience had taught me that we were good, we qualified for tournaments though we never ran up cricket scores against teams. Jack’s tactics weren’t conducive to that but we had just beaten Portugal, put four past Northern Ireland and comfortably defeated Liechtenstein in Lansdowne Road only months previous. How had we come so low that one newspaper headline ran with “Ireland draw with mountain-top”?

What the draw did provoke was more questioning of Charlton as manager. Critics somewhat hushed after the fine start to Euro 96 qualifying would have plenty to criticise after back to back 3-1 defeats to Austria. Before the home defeat to the Austrians in June 1995 the Irish national side had undergone shambolic preparations with training in Limerick being taken by John Charlton in his father’s absence and on Jack’s return the squad were treated to a meal in Harry Ramsden’s fish and chip restaurant in what looked like an industrial estate off the Naas Road. Hardly the dinner of Champions.

Niall Quinn would recall the players “burping and farting” through the subsequent training session. The Republic of Ireland would finish runner-up to Portugal in the group, only finishing above Northern Ireland on goal difference before being defeated by a Dutch side full of the bright young things that had just propelled Ajax to victory in the Champions League in a playoff. Their young striker Patrick Kluivert bagged both goals and it would be Jack Charlton’s last game as Ireland manager.

Though the problems were already present, an ageing team, a certain complacency from Charlton, tactical inflexibility, it was perhaps the draw against Liechtenstein that first properly brought this to the fore and convinced the Irish public that the almost deified Jack Charlton was indeed fallible, and that Eamon Dunphy might have had a point after all. Charlton’s somewhat awkward departure (everyone assumed he’d retire and the FAI would not actually have to make the decision to let go the nation’s most successful manager) saw him replaced for World Cup 98 qualifying by his former on-field captain Mick McCarthy.

A chance for some sort of revenge against little Liechtenstein would come quickly as they were drawn as bottom seeds once again, McCarthy’s charges would record back to back 5-0 wins, and he would give game-time to a group of young players like Keith O’Neill, Gary Breen and David Connolly, while changing the brand of football Ireland played with a re-found emphasis on passing football and attacking play. These victories under McCarthy will probably never eliminate the memory of that mountain top draw and the heroics of Martin Heeb though.

2 thoughts on “Remembering Liechtenstein – a cautionary tale for Ireland”