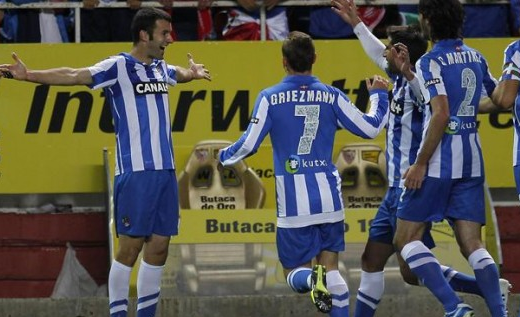 With the coastal city of San Sebastián guaranteed Champions League football this season, the Gipuzkoan capital can expect its visitors over the coming few months to be travelling with the intention of seeing their side take on Real Sociedad in European competition, rather than soaking up the Basque municipality’s heritage via a stroll through its famed, picturesque old town.

Watching football in San Sebastián and getting a sense of the city’s history needn’t be mutually exclusive activities, however. Sociedad’s Estadio Anoeta is just a short walk from the city’s ‘Old Part’, and sitting just in front of the stadium’s gates, cast in marble and bronze, is a further link to San Sebastian’s past – its illustrious footballing past, that is.

Alberto Ormaexta is one of Real Sociedad’s most successful and beloved sons, and it is his bust that is stationed outside the entrance to Anoeta, serving as a permanent reminder of the success he oversaw at the Basque club. In 1980-81, having been in charge of the side for two years, Ormaexta made Real Sociedad only the eighth team to win the Spanish league title. By 1981-82, Sociedad had become just the sixth team to have ever won La Liga more than once. In the following season Ormaexta even led Sociedad to a European Cup semi-final, where they lost out to eventual champions Hamburg.

In 1985, after a career at the club that spanned 23 years and saw him serve as a player, coach and manager, Ormaexta finally ceased to be involved with Real Sociedad in a professional capacity, having delivered what all associated with the club would consider its ‘glory days’. Indeed, Real Sociedad have struggled to scale the heights they did under Ormaexta’s leadership, although in 2002-03 Los Txuri-Urdin finished as runners-up to Real Madrid, thanks predominantly to a 43 goal partnership between big money strikers Nihat and Darko Kovacevic, as well as a series of exceptional performances from a young Xabi Alonso.

This relative success was short-lived, however. Although they reached the last-16 of the subsequent season’s Champions League, the extra games took their toll, and Sociedad finished their domestic campaign in 15th place. Things weren’t about to get better either.

On October 28th, 2005, Ormaetxa died at the age of 66, and his passing marked the beginning of one of the darkest periods in Sociedad’s entire history. That season, Sociedad avoided relegation by a single point, finishing in 16th place. They succumbed the following year, however, dropping down to the Segunda Liga after a 40 year stay in the top flight.

Real Sociedad operate on an annual budget of €40m. To put that into perspective, their budget is less than ten percent of what the likes of Mourinho and Ancelotti get to work with every year in Madrid. For any team that has to work with such restricted funds, relegation is always a cause for grave concern, and club president Jokin Aperribay knew that austerity measures had to be implemented to ensure that financial receivership didn’t deteriorate into a full-on implosion. For Sociedad, austerity manifested itself as an increased amount of focus on Zubieta, the club’s fertile youth academy.

The decision to place the club’s future in the hands of its academy wasn’t made because players were struggling to make the transition from the youth team to the senior squad – of the 24 registered to play last season, only seven hadn’t been at the club as youngsters – nor was it solely motivated by financial concern. No, the emphasis on youth was also driven by the fact that a clutch of exceptionally talented players were about to come to the fore.

In the 2009-10 season, having spent two years in the Segunda Liga, Sociedad’s core of loyal academy alumni was boosted by a handful of effective loan signings and the breakthrough of one of their exciting new generation. That year, Sociedad won the promotion that their rich history deserved, and the name of their latest starlet was Antoine Griezmann. The French left winger spent four years in Sociedad’s youth system before an injury to a senior player gave him a chance in the first team, and it was an opportunity he quickly capitalised on. Griezmann scored on his first start for the club, and the quality of his performances convinced then-manager Martin Lasarte to make Griezmann a regular starter.

Lasarte’s faith was to be rewarded. As well as being devastatingly quick and technically exemplary, Griezmann is also a composed finisher – thirty goals from 145 games is a decent return for a young winger, and the seven he scored in Sociedad’s first season back in La Liga went a long way to ensuring Sociedad’s top flight status that year.

The next youth team product to follow Griezmann into the senior squad was midfielder Asier Illaramendi who, after initially enduring a stop-start beginning to his first-team career, made 32 starts last season. Illaramendi is a player with exceptional passing vision and range, and so appropriate were the parallels drawn between him and Xabi Alonso that Real Madrid paid his €39 million release clause, seeing the deep-lying playmaker as the ideal heir to Alonso’s ‘quarterback’ throne.

Sociedad’s squad has since been further augmented by the introduction of Spaniards Iñigo Martínez and Rubén Pardo who, like Illaramendi, Griezmann and so many of the club’s current playing personnel, have made the grade after coming through the club’s youth system. Centre-back Martinez’s quality is demonstrated by the fact that he has been seriously touted as the answer to Barcelona’s long standing defensive issues, whilst Pardo, an ever-present in the Spanish team that won the under-19’s European Championship, undoubtedly has the talent to ensure that Sociedad do not miss Illaramendi.

Players as talented as the ones Sociedad have produced are always liable to be whisked away by a bigger club for next to nothing, but the club’s management has conducted some extremely shrewd business to make it is as hard as possible for the giants of the game to steal away their assets. Pardo, Griezmann and Martínez are all under contract for at least the next three years, and as such the club will not be coming under pressure to sell anytime soon. These players also have expensive release clauses inserted into their contracts, so if bigger clubs do come in for them, Sociedad will receive adequate compensation for the services they will be losing. Indeed, the €39 million Sociedad received for Illaramendi will go a long way to securing their future as a football club, and the transfer also demonstrates that Aperribay was right to develop a business model based around the club’s academy.

As well as tying their bright young things down to long term contracts, Sociedad also instil in their players the value of loyalty, and the fact that the likes of club captain Xabi Prieto, defender Mikel Gonzalez and midfielder Markel have spent their whole career in San Sebastián is testament to the strong bonds forged between the club and its players.

Griezmann, Martínez and co have all displayed a similar level of dedication to the club that raised them by refusing to address any speculation with regards to a move away from Anoeta, and the man who benefitted from this professional fidelity was manager Phillipe Montanier.

Indeed, the combination of these precociously talented youngsters and a spine of experienced players committed to the Sociedad cause was one that clicked for Montanier, and he delivered the club its most successful season in a decade by securing a fourth-placed finish on the final day of the season.

Last season Montanier’s Sociedad adopted a 4-2-3-1 system designed to utilise the pace of Griezmann, new signing Gonzalo Castro and ex-Arsenal striker Carlos Vela, as well as the passing abilities of Prieto, Pardo and Illaramendi. Consequently, Sociedad were a team capable of making lightning quick transitions from defence to attack, and the success of their swift offensive game was demonstrated by the fact that they scored 70 goals last season, a tally bettered only by Barcelona and Real Madrid.

Sociedad’s free-scoring nature meant that they were often involved in exhilarating matches, with just under a third of their games last season containing at least four goals. However, the team owed much of its success to the fact that they were able to couple their attacking intentions with a considerable degree of resilience – after winning only three times in their first ten games, Sociedad then went the reason of the season with only two defeats to their name, and recovered from 2-0 deficits to draw with Real Madrid and beat Barcelona.

The surprising loss of Montanier to Rennes threatened to derail Sociedad’s start to this season, but their impressive 4-0 aggregate win over Lyon in their their Champions League playoff suggests that the internally appointed Jagoba Arrasate may lead ‘La Real’ to even greater heights this season. Indeed, having been drawn into a Champions League group with Manchester United, the likes of Griezmann, Vela, Pardo and Martínez now have an opportunity to write one of the most successful chapters in Sociedad’s history against one of the most illustrious names in world football. If they do, don’t be surprised to see Ormaexta having to start sharing his spot in front of the Anoeta gates.