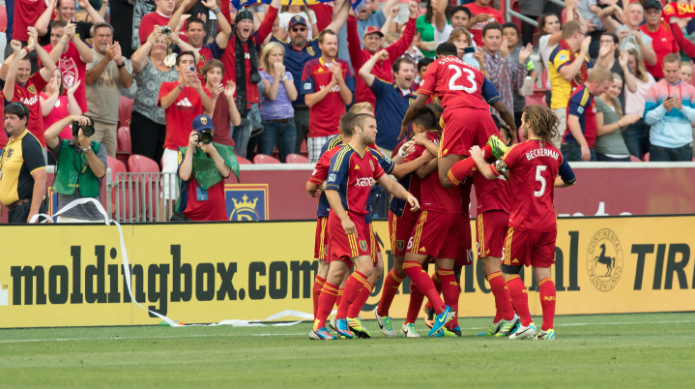 That was the response that this intrepid journalist received when speaking with a fellow football fan in my office.

But there is this curious courtship that is going on here in the United States with football fans and MLS. Perhaps it is due to the World Cup or perhaps it is because of the “hip” factor that soccer currently has here – or perhaps it is because of the great beer at parks. Yours truly votes for this. But whatever the reason may be, there does some to be more attention given to the league both in North America and oddly enough abroad.

Whether it is an American who is a novice to the game or a European ex-pat the common question that I am always asked at bars or at a football match is: What team should I support? While the selfish journalist in me says D.C. United – given my current journalist assignments – there is really only one team that immediately jumps out over all others:

If this is the first time that you are hearing about Real Salt Lake, then it is certainly understandable. In a league where teams swoop in and purchase any flashy European or South American who are looking for one last big payday, Real Salt Lake go against the grain. Aside from midfielder Kyle Beckerman, who perhaps is better known for his hair, this is a squad of players who are only really recognizable by the hardcore football supporters.

Names like midfielder Javier Morales, Ned Grabavoy, and goalkeeper Nick Rimando do not exactly move the Nielsen meter. Yet here they are again in 2014 fighting for the top spot in the Western Conference and with a shot at both the MLS Cup and the Supporters Shield. Given that the club has already won the MLS Cup in 2009 and has made the playoffs in four of the past five seasons, this is by no means a club punching above its weight.

So what makes Real Salt Lake such an exciting team to watch? Take a look at last week’s match against F.C. Dallas. Coming off of a difficult loss earlier in the season against their Texas neighbors, Salt Lake came back not once, but twice against one of the league’s hottest teams. On the pitch for just five seconds, RSL forward Alvaro Saborio delivered the crushing blow on a header to give RSL the lead. Saborio, who missed the World Cup with Costa Rica due to a broken foot, has long been Real’s talisman up front leading the team in career goals with fifty-nine.

But beyond the theatrics, it is the way in which they move the ball that makes them such an interesting team. Using a diamond formation in the midfield, coach Jeff Cassar has carried on a tradition from his predecessor Jason Kreis – who will coach the NYC F.C. team that is co-owned by Manchester City – of using a 4-4-2 system that encourages ball control and outside play on the wings. Despite the transition in coaches, the team continues to play a style that forces their opponents to chase. Both Morales and Beckerman like to play cat and mouse games with their opponent and can deliver sound, precision passes into targets like Saborio and the young Colombian forward Joao Plata.

One of the major myths of Major League Soccer is that one or two big name signings automatically means that a club will win trophies. Yet for every David Beckham or Landon Donovan there is an Eddie Johnson or Marcelo Gallrado, players who are given exorbitant salaries and accomplish nothing. Those that believe that a team needs high priced players to succeed should look at the current situation with Toronto F.C. as a reminder of what it really takes to build a quality squad in this league.

For as much as big names from yesteryear might provide small improvements in attendance and ratings, it is the development of younger talent that will lead the league to greater success. A team with eleven players under the age of 23 on their roster and four Homegrown Players playing significant minutes in their eighteen man rotation, it is clear that RSL has built themselves a squad for both the present and the future.

Full credit should go to both Cassar and General Manager Garth Lagerway for developing players like defender Chris Schuler, midfielder Luis Gil, and the aforementioned Garcia and turning them into starters on one of the best squads in MLS. The club’s announcement this week of the addition of their Academy team to the USL Pro division is another example of how to build a proper football club here in the United States.

Although by no means is Real Salt Lake one of the most popular teams in MLS, they are one of the most enjoyable. With a style that is up-tempo and a system that promotes younger talents over relics there is very little not to like about this team -unless you are of course a Seattle Sounder or Los Angeles Galaxy supporter. In a league that is still struggling to find its identity, consistency is key. Real Salt Lake has that in spades.