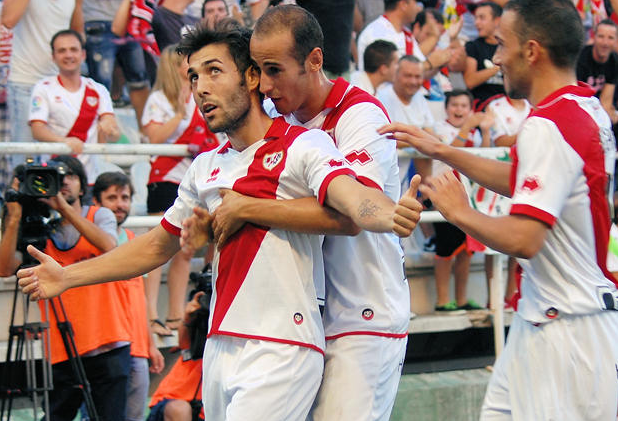 On Saturday, Rayo Vallecano, the lowly team from the working-class region of Madrid, played perhaps their most important game of the season against Malaga. Lose this, and they would surely be doomed to relegation.

Two days before the game, the club released a motivational video, encouraging fans to get behind the team. The message at the end of the video was simple: ‘juntos podemos’. Together we can.

It could be a phrase used to describe Rayo’s entire stint in La Liga since promotion in 2011. The club has always relied on fervent support from its long-suffering fans, who have seen Rayo fall into administration in recent times, and, as any follower of La Liga can testify, boasts a stadium with arguably the best atmosphere in the league.

Vallecas is a cauldron of sound on match days, and was one of the main reasons why the side managed an incredible eighth-placed finish last season, despite largely being made up of journeymen, free transfers and loan signings.

What’s more, Rayo Vallecano are one of the most liked teams in the whole of La Liga. They are seen as the last of the barrio (neighbourhood) teams in Madrid, and are a breath of fresh air in a league dominated by money, with one of the lowest budgets in La Liga.

But this season has been an entirely different challenge for last year’s surprise package. Los Franjirrojos find themselves in 19th place, with many pundits already having earmarked them for the drop. Unlike last year, Rayo’s attacking style hasn’t troubled La Liga’s other teams as much, and their fragility in defence has become even more of a problem.

What’s more, the team from Vallecas lack a true goalscorer. Where in recent years they have had the likes of Michu, Diego Costa and Piti, this term their top scorer is Jonathan Viera, with a measly eight goals.

Paco Jemez insists on a near-suicidal style of play, which, though entertaining to watch, could ultimately cost his team. Many commentators have made the point that when Jemez’ methods succeed, Rayo are a joy to watch, but when they fail, they do so in spectacular fashion.

Take the 5-0 defeats to both Atletico Madrid and Malaga earlier this season, or the 5-2 loss against Villarreal, for example. Even the Vallecas faithful have their limits, and they have voiced their discontent at Jemez’ stubborn adherence to a system which doesn’t seem to be working. His response was typical of a manager with the utmost confidence in his own philosophy: “The jeers will not change the way this team plays football”.

There are glimmers of hope: on Saturday everything fell into place for Rayo as they beat Malaga with a resounding 4-1 scoreline. But while Paco Jemez should be praised for his commitment to entertaining football, a more pragmatic approach would have been the wiser option this season. Rayo may have won many admirers since promotion to La Liga, but it will count for little if they descend to the dreaded Segunda. Sometimes football can be cruel, and one can’t help feeling that this hugely likeable team are destined for the drop.

Pursuing a career in journalism. I write about all things Spanish football, with a particular passion for La Liga.