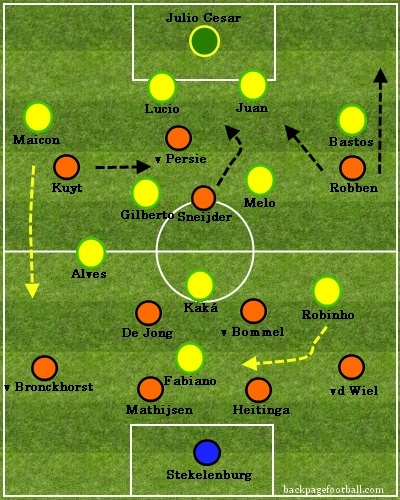 Brazil breezed past Chile somewhat unsurprisingly in the second round. So far, Dunga’s men are looking fantastic and are well on course to deliver yet another world title. The tactics and the structure of their side is unbreakable, and with the right mix of quality and skill they have produced some beautiful performances so far in the tournament.

The Netherlands have been less as impressive, but are grinding out wins nonetheless. Beating Slovakia 2-1 in the previous round, the Dutch team were quiet but effective as they welcomed back Arjen Robben to a right sided role, and put Dirk Kuyt to the left. Both moves worked nicely.

This will be an interesting game. The Netherlands are undoubtedly the best side Brazil will face so far who have the strongest blend of defence and attack. Chile had bountifuls of attacking quality, but lacked strikingly at the back. The opposite could be said for Portugal, while North Korea and Ivory Coast just didn’t provide a strong enough challenge to topple Brazil.

I will be very surprised if Bert van Marwijk strayed away from the side that beat Slovakia, albeit a little unconvincingly. It’s a strong side, the inclusion of Robben meaning Rafael van der Vaart missed out. Defensively they are incredibly strong. The ageing Gio van Bronckhorst on one side, with the youthful Gregory van der Wiel on the right. The centre back pairing isn’t world class and will find it difficult to marshal Luis Fabiano and Kaká, but they are well in sync with each other – possibly one of the strongest centre back couples we’ve seen along with Portugal, Brazil and Uruguay.

Brazil will stay with the same system that has worked so far. The only changes may come in midfield, where Felipe Melo might return from injurey to replace the suspended Ramires. Elano is still a doubt. That said, Julio Baptiste and Dani Alves are both viable replacements if needs be. Defensively, like Holland, Brazil are formidable. Maicon, the best right back in the world, without question, has been one of Brazil’s main outlets of attack down the right hand side, but he is a pretty good defender too. Lucio and Juan will have their handfuls with Robin van Persie, and Kuyt drifting in, while Felipe Melo (if fit) and Gilberto Silva will have to keep a close eye on the “false 10” Wesley Sneijder.

The main weakness in Brazil’s side – if they have a weakness – is most likely Michel Bastos at left back. Good attacker, and pretty good defender, but he could easily get turned inside out by Robben. The Dutch should look to the Bayern Munich winger as often as possible and get him to take on the left back who plays his football with Lyon. The front two of Sneijder and Robin van Persie will trouble the Brazilian backs, maybe more so than previous games. Sneijder and van Persie play deep, while the Arsenal forward likes to drift around. Lucio and Juan like to press up, leaving space for the quickness of Robben and the forward running of Sneijder, and if van Persie plays deep, Brazil will be immediately on the backfoot when not in possession.

Similarly to Brazil, Holland’s weak point is at left back. Not for lack of quality, but for lack of pace that Dani Alves and Maicon have in bagsful. van Bronckhorst will be a targeted man, but that’s no surprise looking at previous Brazil games where Maicon was involved regularly. Gio will be counting on Kuyt to cover him, which he should do.

It’ll be a clash of two very good sides, one which is meeting it’s very high standards, the other which has yet to get out of first gear – but is recording wins nonetheless. Holland have the right players to target Brazil’s weakpoints, while the attack and possession playing Brazilians will fancy their chances against the six-man defensive minded Holland.

Uruguay, to our surprise, have been one of the more interesting tactical sides of the tournament. Playing a 4-3-3, with Diego Forlan playing a little deeper in the centre forward role, Uruguay have been able to score goals literally when they needed to, and have had forwards capable of taking on the mantle when Forlan had an “off” day. Uruguay have been very impressive, from their defensive structure through their three man midfield and into the deadly trident of Forlan, Luis Suarez and Edinson Cavani.

Ghana have also been a tactical revelation at this World Cup. They are very structured and disciplined, and are assured and comfortable in the midfield with a decent defence to boot. They have been able to create plenty of chances, particularly from wide areas, but lack a goalscoring striker. That may have changed against the USA in the previous round, however, when the superb Asamoah Gyan stepped up to show all the attributes of a world class lone-striker and score the winning goal in extra-time.

Uruguay’s last sixteen victory came against South Korea. It was an odd game. After both sides conceded, they became the better team. Uruguay scored through the formidable Suarez, but sat back and conceded to Korea, who in turn played poorly, sitting back and conceded the fatal goal to Suarez again. There should be less of that from Uruguay, as we’ve seen from their World Cup thus far, they have goalscorers who can score when they need a goal – not when they want a goal. The front three pairing have been nothing short of fantastic since beginning in the second group game against South Africa, scoring five goals between them. They are also very good defensively, where it’s possible Ghana will struggle to find a breakthrough.

Ghana however, are not to be written off. Against a side who has only conceded one goal, where Ghana themselves have only scored twice from open play, it doesn’t hand you much faith. But they may be able to marshal the Uruguayan front line well enough to keep the score level for most of the game. Then, as we saw in the 120 minutes against USA, be patient and score from one of the many chances that they can create.

The Ghanians play a narrow midfield, but it will 3 on 3 in the middle of the park where Uruguay deploy a wide midfield player in Alvaro Pereira, a man they’ll need to keep an eye on for his forward runs. Ghana may also start with Samuel Inkoom at right midfield, primarily a defender who will cover John Paintil when defending against Suarez. Ghana can deploy two different defending styles, sitting back with two banks of four, or pressing. It’ll be interestig to see which they opt for against Uruguay tomorrow.

It’ll be a good, tactical battle, I’m sure of that. If Forlan and company are on form, Uruguay will have bagsful of quality in attack to overcome Ghana, who are no pushover. It really could go any way – a good structued side who are competent defenders against a team who have plenty in attack, and plenty at the back. But I’m giving the benefit of the doubt to a decent Ghanian side.