Perhaps with all the drama and excitement of Sunday’s World Cup games, the biggest blunder of the day went relatively unnoticed.

Patrice Evra’s failure to contain his obvious shock at the fact that the woman sat beside him was able to talk perceptively and knowledgably about the forthcoming match made for uncomfortable viewing.

This is not a piece patronisingly congratulating Eni Aluko on doing her job properly. Adequate research on the teams pundits are paid large sums to analyse, although too often a refreshing change from worn out clichés, should be standard practice.

Punditry suffers from excessive scrutiny, partly because it’s a job which appears to be deceptively easy. 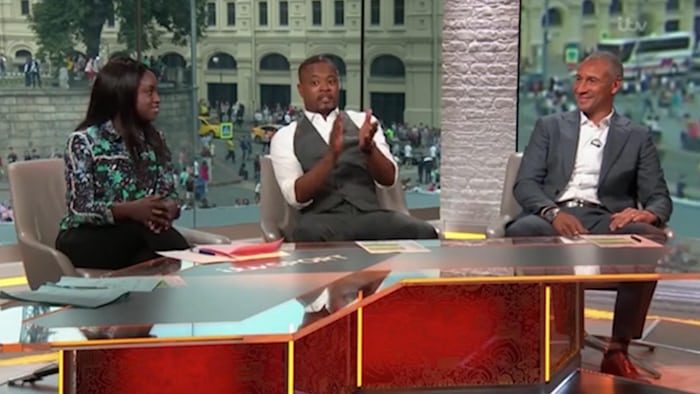 Talking about football is a pastime all the football viewing public take part in, and naturally most think they are very good at it. This means that people paid considerable sums to do the same are under constant pressure to offer more insight than mere ‘pub-talk’. This also means that mere pub-talk passed off as insight is easy to spot.

Evra started off the Costa Rica v Serbia preview lounging back in his chair, with a crisp, condescending ‘very good’ after Aluko’s assessment of Costa Rica’s offensive shortcomings. This was followed up by a short round of applause.

Henrik Larsson, the third pundit in the room remained quiet, seemingly unimpressed with Evra’s incredibly confident display of sexism live on national television. Evra finished off his contribution before the ad break with an incredulous “She knows more about football, than us!” after Aluko’s comments on Serie A’s rising star Milinković-Savić. Evra, having spent three seasons in Serie A himself, had nothing to offer on that topic.

Redemption for Evra could perhaps had been possible had he composed himself during the break after his initial shock and offered some sort of analysis on the upcoming game, or even his own former side France.

Unfortunately he then proceeded to insinuate some sort of conspiracy against Paul Pogba amongst the dubious goals panel, ignoring the reality that Pogba did not in fact score France’s winner.

During half-time his take on Serbia’s struggles, despite their dominance, was attributed to their failure to adapt to the conditions in Samara. If a reluctance to research the footballing aspects of either side could be excused, a failure to grasp basic geography is tougher to justify.

Evra’s assertion that the Serbian team could be struggling due to it being too hot in Russia, neglected the fact Serbia lies just 2,000km away, to the south of Russia. The most lazy, overused tournament cliché had been wheeled out to one of the few sides to which it did not apply.

It is understood that Evra has been advised by ITV to modify his interaction, and it’s unlikely he will face any punishment from his employers. Although as has been pointed already, this wouldn’t be the first World Cup he’s been sent home from.