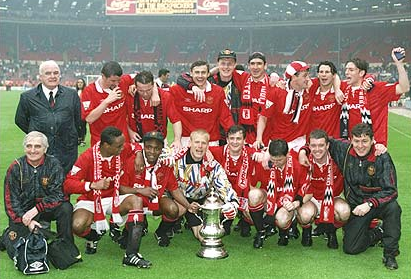 Nominations to mark the 20th anniversary of the Premier League have shortlisted the greatest teams of its era and whilst it is understandable that those who’ve decided upon this have attempted not to be too ‘Ferguson-centric’, the omission of one of his greatest sides is a baffling one.

As the most successful and dominant club of the Premier League, Manchester United have had sides, such as the nominated 1999 and 2008, that have been blessed with players whose inclusion in an all-time eleven wouldn’t be unreasonable but their 1994 double winning side was arguably their best.

Starting, most logically, in goal, Peter Schmeichel was a great symbol of the drive and aggression of the ’94 team. Whilst a naturally outstanding keeper able to make athletic saves, proven by being the only goalkeeper of the 1990s to be nominated in the ‘best save’ category, the ‘Great Dane’s’ persona was the reason why he was the ultimate Number 1. Bellowing instructions and ordering his defence, Schmeichel intimidated even his own defenders, but crucially the attacker, allowing him to control his area forcefully and win most one-on-ones, most famously in the 1-0 victory away to Newcastle, and particularly Les Ferdinand, in 1996. The fact that it took Sir Alex Ferguson so long to find his heir, in the unflappably cool Edwin van der Sar, proved what a crucial player Schmeichel was to United.

The decision for the left-back slot is fairly comfortable too, despite the success of the current captain, Patrice Evra. Whilst Evra could be criticised for erraticism, Denis Irwin was the epitome of calmness. Deceptively fast and a tough-tackler, Irwin was a reliable defender, so ambidextrous that the fact that he was right-footed was a surprise. What made Irwin such a complete player though was his ease on the ball, allowing him to be a dangerous attacking threat, linking up well with the forwards and being comfortable enough to take penalties.

The weak link of the ’94 team was right-back Paul Parker, which could be seen as cruel as he was a more than adequate performer. He was athletic and consistent but could be caught out by the more skilful winger, and he lacked the attacking prowess of Irwin. By 1995 he was replaced by the reserve Gary Neville, whose drive, tackling ability and commitment allowed him a decade of uninterrupted first team action.

The centre-back pairing of Nemanja Vidic and Rio Ferdinand complemented eachother perfectly; Ferdinand’s comfort on the ball supplementing Vidic’s aggression making them one of the indomitable partnerships in Europe. Whilst humiliated in Europe, infamously in Barcelona in 1994, Steve Bruce and Gary Pallister were a more rudimentary, yet just as successful, version of Vidic and Ferdinand. Captain Bruce possessed a winning mentality that stretched across the spine of the team, and was an inspirational figure, particularly in the mentoring of younger players. Pallister, more elegant on the ball than his appearance would suggest, had an equally effective heading ability allowing a partnership hard to breach.

On the left-wing was the most exciting young player in the league, a dynamic Welshman with a dribbling ability that Gareth Bale could only dream about. Ryan Giggs remains a wonderful player of course but different to the one who tormented full-backs two decades ago. Incredibly talented, Giggs was the pin-up of the side, capable of scoring memorable goals after magical runs, such as against QPR and Tottenham Hotspur the season before.

United’s most attacking threat away from home was electric counter-attacks that the pacey Giggs was central to. Equally important, and arguably faster, Andrei Kanchelskis was a devastating winger, comparable to Antonio Valencia nowadays. Whilst Giggs had a box of tricks, Kanchelskis was predictably direct allowing him to be an effective crosser and goal-scoring threat, more palpable the season later when he was leading scorer. His style could have been criticised as greedy on occasion, which certainly was not the case with his successor David Beckham who was the antithesis to the Russian. His pin-point crossing and dead ball ability made him a striker’s dream teammate but his lack of pace restricted his success as a direct winger.

The Treble winning quartet of Beckham, Giggs, Paul Scholes and Roy Keane was beautifully balanced. Scholes, rivalled only by Frank Lampard in the Premiership era, was the most lethal scoring midfielder, and his achievements overshadow the effectiveness of Paul Ince, who was an awesome presence in the 1994 midfield. Remembered as the self-styled ‘Guvnor’, Ince was more than a combative, egotistical tackler. He was an athlete, a warrior with unbelievable agility. His determination to win, outstanding by most standards, was not unusual in this team of champions.

Ince had won the inaugural Premiership alongside an injury-ravaged Bryan Robson or former-forward Brian McClair so the then record-signing of Keane was most welcome. Immediately, on his debut against Sheffield United when he scored a brace, Keane fitted in seamlessly into the side. He was the ultimate box-to-box midfielder, tackling and covering the pitch with authority, whilst setting-up attacking moves with underrated ease. Unforgettably, as he would prove soon after, he was also a motivating leader.

United have possessed some of the greatest forwards England has ever seen. From the reliably brilliant Ruud van Nistelrooy to the dynamic young trio of Cristiano Ronaldo, Wayne Rooney and Carlos Tevez in 2008, United’s best strikers have been direct and clinical. Arguably the finest partnership was the 1999 duo of Andy Cole and Dwight Yorke whose success could only be attributed to telepathy.  The 1994 combination of Mark Hughes and Eric Cantona gave United a superb advantage.

Hughes had reached his peak by ’94 and was known for his ability to score spectacular and important goals, his late equalizer in the FA Cup Semi against Oldham Athletic proving this. Strong and brave, Hughes was terrifically gifted. Cantona was the catalyst to the success of the first Premiership win and he would drop off Hughes. As the star of the team, his arrogance and self-belief resonated onto his teammates. United surely had a chance of a third successive championship in 1995 if not for the iconic kung-fu kick, making Blackburn’s inclusion in the nominations for best teams rather ridiculous. Of course, he wasn’t all personality; his ability to score in a variety of ways (and at some crucial times), assist imaginatively and dictate games with such confidence means that it’s not unlikely that he will be voted the League’s greatest.

If the award was for best squad then the 1994 side may struggle. The 1999 side boasted the other members of the ‘class of 1992’, the dependable Phil Neville and Nicky Butt, as-well as the hugely prolific super-sub Ole Gunnar Solskjaer, whilst the 2008 side juggled around an assortment of accomplished squad players, such as Wes Brown, John O’Shea and Darren Fletcher, as-well as emerging talents like Nani and Anderson. The 1994 side would most likely call upon veterans McClair or Robson in an emergency or the slightly disappointing Lee Sharpe, considering his early promise.

Football is of course a team game so whilst the 1994 team did have some players that were not as technically gifted as players to have graced the Premiership since, it was a team that was completely driven to win under the relentless Ferguson. This was a side, from Schmeichel to Bruce to Keane, whose desire to win was unrivalled, even by Arsenal’s ‘invincibles’.Many were in the peak of their careers and were unfazed by their competitors, characterised by the stirring 3-2 comeback at Maine Road when two goals down to Manchester City.  Combined to this mentality was an enigmatic Cantona, and exciting attacking style, encapsulated by the vibrant Giggs, which made this United team surely one of the best the Premier League has ever seen.