Nani debuts for Sporting CP but neither impress despite win

“Bem – vindo a casa, Nani” is how Sporting CP’s Twitter confirmed Nani’s season long loan deal from Manchester United. Welcome home, Nani . Indeed, the faithful of the ‘Lions’ granted the home town boy a hero’s return. They turned up in droves at the airport to show their delight at Nani’s return. However, it is doubtful that the prodigal son was entirely happy to return to his native land.

Nani joined Manchester United in 2007 for a reported fee of around €22 million and was seen as the long term successor to compatriot Cristiano Ronaldo who had made the same move only four years earlier. In his seven seasons in a Red Devils’ jersey Nani was a largely frustrating figure. He was often hampered by injury and loss of form only showing fleeting glimpses of the quality the early hype promised. Nani returns to Portugal as merely bargaining fodder for Marcos Rojo.

It has the feeling a hackneyed cliché ridden sports film. Former hot shot player returns to his home town, learns some important life lessons and leads a ragtag bunch of misfits to glory. Unfortunately if their game against Arouca is anything to go by, this project may remain in development hell. 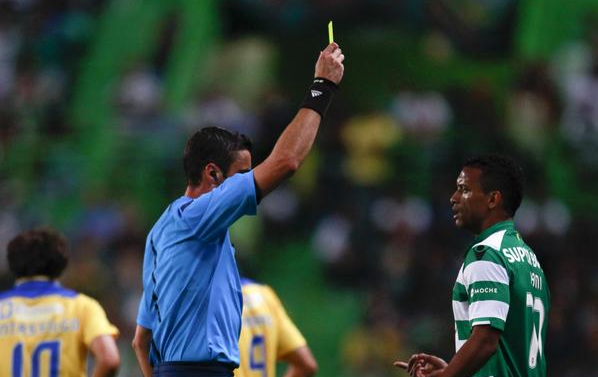 The 27 year old’s re-debut for the club started well enough. He showed guile through a few nice touches and turns along with some penetrating crosses that troubled Arouca’s defenders. It could have just been solid start. Something to build upon.

Instead, Nani insisted that he take a penalty in place of regular taker Adrien Silva who is very clinical from the spot. All credit must go to the Uruguayan goalkeeper Goicoechea as he produced a fantastic save to deny Nani. Coach Marco Silva duly substituted Nani soon after which the winger didn’t take too well.

Luckily for him though tha Carlos Mane followed up after Junya Tanaka’s strike cannoned back off the post to put Sporting CP in the lead in the last minute of the game, surely giving the 40,000 at the Estadio Avalade a collective sense of relief. Though, it must be noted that this only came about when Sporting desperately threw numbers forward in search of a goal. The performance of Adrien Silva must be signalled out in this period as he essentially held midfield on his own.

Their next match is an enticing encounter away to Champions Benfica next Sunday.

Braga played out a 0-0 draw away to Moreirenseon Monday night. Manager Sergio Conceicao felt irritated that Braga were denied a penalty but conceded that the host’s had worked had enough to deny his side all three points.

Conceicao became manager of Braga in the summer with the objective of improving upon last season when they finished in ninth place, their worst finish since the 2002/2003 season. Before last season’s debacle, Braga was on course to become the fourth big team in the Primeira Liga. Turning ‘Os Tres Grande’ into ‘Os Quatro Grande’.

Braga lost a string of key players in the last summer’s transfer window while their star Eder was injured for most of the season. While the club failed to qualify for the lucrative Europa League Group Stages and went through two different managers.

Though, much is expected of Conceicao, the former Porto winger believes he can achieve success as Braga manager. Speaking at his first press conference for the club, he declared that:

Modesty apart, I’m convinced I can achieve as much success in my coaching career as I did as a player. I will give maximum determination, hard work and dedication and I’m proud to be able to honour this club, this city and these fans.

There was a sense of occasion surrounding Boavista’s first top flight home game in six years. The Estadio do Bessa was filled with fans that must have believed that the ‘Panthers’ could cause an upset and beat the defending champions. It was though the 3-0 trouncing at Braga last week and the preceding years in obscurity had not happened.

Despite their fan’s fervent support, Benfica completely dominated large parts of the game but may be worried at the lack of creativity they showed going forward. Although this may become a headache for Jorge Jesus this season if he is unable to strengthen the squad. Benfica took the lead from Eliseu’s fantastic strike from 30 yards on 44 minutes. The 30-year-old’s goal came after the ‘Eagles’ did well to maintain the pressure caused from Nicolas Gaitan’s initial free kick.

Jorge Jesus was sent off at the end of the first half for badgering the referee, Marco Ferreira in the tunnel. He felt aggrieved that his side were not awarded a penalty for a foul on Franco Jara. Instead, Marco Ferreira booked the Argentinian for diving despite replays showing that he was fouled. Mr. Ferreira’s decisions were a cause of contention for most in attendance. He sent off Boavista’s Bobo for a second bookable offence 10 minutes from time and they were denied an equaliser after Britos’ strike was judged to be offside.

Despite Benfica’s victory, bad news came in the form of midfielder Ruben Amorim’s tearing his anterior cruciate ligament causing him to be out for the rest of 2014.

Boavista take on Rio Ave at home next Monday while, as mentioned, Benfica host Sporting CP.

Three teams have set down an early marker in their attempt to finish in the European places. Rio Ave finished in 11th place last season and qualified for Europe by being runners up in both the Taca da Liga and Taca de Portugal. They are one game away from making the Europa League Group Stages as Rio Ave face Elfsborg at home at Thursday. They warmed up for the important clash by thrashing Estoril 5-1 away on Sunday. Ahmed Hassan Koka scored a hattrick while Pedro Martins grabbed two.

Vitoria Guimaraes defeated Penafiel comprehensively 3-0 at home on Friday night. 19-year-old Ghanian Bernard Mensah impressed as he scored a brace while Tomane picked up the third.

Belenenses seemed to have put the troubles of last season behind them as they beat Nacional 3-1 on Sunday. They struggled last season finishing third from bottom. Deyverson, Dantas and Fredy all scored for Belenses.

For the past two seasons the top goal scorer of Primeira Liga has been Jackson Martinez with 26 goals in his first season and 20 goals last season. His importance to Porto cannot be overstated, however if transfer conjecture is to be believed then the Colombian is to be sold to AC Milan. It appears as if Porto’s signing of striker Vincent Aboubakar from Lorient will facilitate the move though Porto will expect Milan to pay his release clause of €28 million.

The ‘Dragons’ may feel that now is the time to cash in on 27-year-old but are they forcing out their most consistent goal scorer. Noted journalist and South American football expert Tim Vickery has described him as “an out-and-out goal scorer, a front-to-goal centre-forward who can finish off both feet, and with excellent spring that makes him a threat in the air.”

He played for Independiente Medillin in Colombia and Chiapas in Mexico before making the move to Portugal for just over €8 million. He has proven to be more than worth the initial outlay and this was again evident in Porto’s largely unimpressive 1-0 victory over Pacos Ferreira on Saturday.

Porto suffered a blow early on in the game as Christian Tello was forced off in the first half due to a muscle injury. He’s set to be out at least two weeks. Tello has been a revelation in the early stages of the season since his summer move from Barcelona. Though, Juan Quintero proved to be a very able replacement. Indeed, the 21-year-old provided the cross for his compatriot Martinez’s poacher’s goal.

A big cause for concern is the reported disagreements between Julen Lopetegui and Ricardo Quaresma. The 30-year-old expressed his disappointment at only playing the last minute of the first leg of Porto’s Champions League play – off game against Lille. It seemed like the Quaresma was set for the door but made assurances to his commitment to the club in a Facebook post writing, “Porto is my club, this is my home.” Indeed, Lopetegui played down the controversy in his pre match press conference for the second leg in the Champions League by simply saying that Quaresma is “a player like any other.”

One thought on “Primeira Liga: Five things we learned in Week 2”