New manager Julen Lopetegui has been tasked with restoring Porto’s dominance at the top of the Primeira Liga after ‘the Dragons’ finished in third place 13 points behind bitter rivals Benfica last season. Porto’s long-serving president Pinto da Costa has shown that he has no fear in appointing a relative unknown to take the reins of the club. This strategy was buoyed by the successes of Jose Mourinho and Andre Villas Boas but seemed like a less secure policy after the failure of Paulo Fonseca last season. 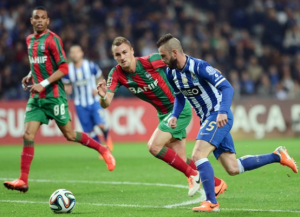 Lopetegui coached the Spanish underage sides from 2010 to 2014 after lasting just 10 games with Rayo Vallecano in 2003. While his managerial CV might be lacking, he has been successful as a coach. He won the 2012 European U – 19 and the U – 21 Championships; however Spain failed to get past the second round in both of the U – 20 World Cups under Lopetegui.

Indeed, his background in youth coaching seems to have already paid off with the emergence of teenage starlet Ruben Neves. At 17 years, five months and two days, Neves became the youngest ever player to play for Porto and the Portuguese youngster put in an assured performance for the Dragons on his debut against Maritimo.

It was a largely dominant performance by Porto. Neves opened the scoring at the Estadio do Dragao finishing coolly from a first time shot after Maritimo failed to properly clear a corner. New signings, Bruno Martins Indi and Yacine Brahimi almost added to Porto’s lead but Maritimo also had chances to level and might consider themselves unlucky not to have taken something from the game.

The second half was a more pedestrian affair but the introduction of Barcelona loanee Christian Tello added some much needed flair and pace into the game and he provided the ball for Jackson Martinez to seal the victory. The 23-year-old Spaniard cut inside from the right before gracefully pulling the ball for last season’s top scorer to fire home his second attempt after his first shot was saved by Romain Salin.

Porto look set for a good season with arguably the strongest squad in Portugal. New signings Casemiro, Jordy Clasie, and Adrien Lopez, along with the aforementioned Tello, Martins Indi and Brahimi all join a squad that includes Jackson Martinez, Hector Herrera and Juan Quintero. Indeed, the signing of Clasie is a significant one as it will most likely facilitate Lopetegui’s move to a more possession based style of play.

Porto will most certainly be looking to improve upon their showing in Europe this season having failed to get out of a group containing Atletico Madrid, Zenit Saint Petersburg and Austria Wien. Then slumping to a 4 – 2 defeat on aggregate to eventual winners Sevilla in the Quarter-finals of the Europa League. Though, they face a tough test in the Champions League qualifying play-off round against French side Lille, while in the league, they face Pacos Ferreira on Saturday.

A few weeks ago things appeared to be looking up for last season’s runners up, the Marcos Rojo – Eric Dier defensive  partnership looked to be one of the strongest in the league and talk of William Carvalho leaving had died down. Now fast forward, Dier’s gone, Rojo set to follow and transfer gossip about Carvalho has resurfaced. All this bodes for yet another season in transition for the Lions and their performance in their opening game indicates that this will be the case.

New manager Marco Silva must have thought that his side had put this uncertainty behind them as Peruvian international Andre Carillo headed into the goal following a floated cross by left – back Jefferson to make it 0–1. Silva replaced the Monaco bound Leonardo Jardim in the summer after guiding Estoril to a fourth place finish last season.

Despite their lead, Sporting CP never controlled the game. Academica saw a great chance to level the game go begging after Rafael Lopes’ header just went wide of the goal. Shortly after, William Carvalho was sent off for a second bookable offense after a cynical challenge. At this point, Academica turned on the pressure and they were eventually rewarded in added time. Rafael Lopes made up for his earlier miss by putting a driven shot past Rui Patricio to equalise. The Students’ goal came as a direct result of Sporting CP’s failure to clear the ball from an initially poor cross. Up next for Sporting CP are Arouca at home on Saturday.

Don’t call it a comeback, but Boavista have not been in Primeira Liga since their forced relegation in the 2007 / 2008 season following allegations of corruption and extensive financial problems. The 2000/2001 champions are back in the big leagues as a result of the Portuguese Football Federation (FPF) enlarging the Primeira Liga to 18 teams.

Though, any unbridled optimism that fans of the black and whites may have had were surely dashed as they lost 3–0 to Braga. It all went wrong inside the first minute of the game as Braga took the lead from a Pedro Tiba strike. A cross into the box that Boavista didn’t deal with and the goal came to Eder who headed it down into the path of Tiba before the midfielder hit a low shot into the right hand corner.

Braga doubled their lead at the beginning of the second half. Rafa Silva made a great run down the left hand side before cutting in and laying the ball off to Ruben Micael whose first time shot outside the box flew past Daniel Monllor in the Boavista goal. The victory was ensured after Eder went down rather easily at the edge of the box which lead to a penalty which Eder duly put away.

Braga look raring to go for the season ahead under new manager Sergio Conceicao and this performance will fill them with much needed confidence. Braga take on Moreirense next Monday while Boavista host the champions on Sunday.

Of the 11 players that started the Europa League final against Sevilla, five – Jan Oblak, Ezequiel Garay, Guilherme Siqueira, Andre Gomes and Rodrigo – have gone with a sixth, captain Luisao a target of Serie A champions Juventus. It has been a difficult summer personnel wise for the Champions with their only signing of note being the former Manchester United player Bebé.

Manager Jorge Jesus needs to rebuild a depleted squad, and quickly. While the squad may currently be good enough for a place in the top three, to ensure Champions League humiliation is avoided – see the 5 – 1 preseason loss to Arsenal – then strength in depth is needed.

Though, Benfica seemed to put all this behind them on Sunday as they beat Pacos Ferreira in what was a largely dominant performance, very similar to Porto’s win. However, it all could have been different if Pacos’ Manuel Jose had not seen his penalty saved by Artur Moraes, in what might be his last game for the club. This was really the last time that the hosts were not in control of the game.

Nicolás Gaitán had an excellent game for ‘the Eagles’ as he assisted both goals. The first came as a result of a one – two with full back Maxi Pereira who smashed the ball past Rafael Defendi, before Gaitan floated a ball from the left onto Eduardo Salvio’s head for Benfica’s second.

Rebranding is a marketing strategy that is used to change perceptions of an already established brand. It was used by financial corporation AIG who received a great deal of negative publicity following their bailout in the market crash in 2008 as they became VALIC. It appears that Benfica are attempting a similar approach with new signing Bebé. Despite being considered a joke by much of the English media, the 24-year-old Portuguese man enjoyed a good spell for Pacos Ferreira being crowned their player of the season.

In his pre match press conference, Jorge Jesus remarked that it’s ridiculous to call a 6ft 2in man ‘Bebé’ and so will now be listed by his birthname, Tiago.

Can any team usurp the ‘Big Three’?

Since the league’s foundation in 1934 only two teams have won the Primeira Liga outside of Benfica, Porto and Sporting CP, Belenenses in 1945/46 and Boavista in 2000/01. ‘Os Tres Grandes’ have dominated the other 78 league campaigns, usually occupying the top three places in the process. The relative ease with which Benfica and Porto particularly have done so well in European competitions over the last 10 years or so may come down to the ease of their league. These three teams are the best supported and often have the highest average attendances with no other team able to compete. The next most supported clubs Academica, Vitoria de Guimaraes and Braga rarely come close to dominating in any sort of meaningful way.

The odds for outright winners reflect this with Porto universally the favourites followed closely by Benfica and Sporting CP. The next favourites for the league are Braga and Estoril who are priced at around 80/1 and 250/1 respectively. Indeed, to take the hegemony of the Big Three further, if Porto fail to win this season’s title then it will the first time since the turn of the century that the club has gone two seasons without being champions.