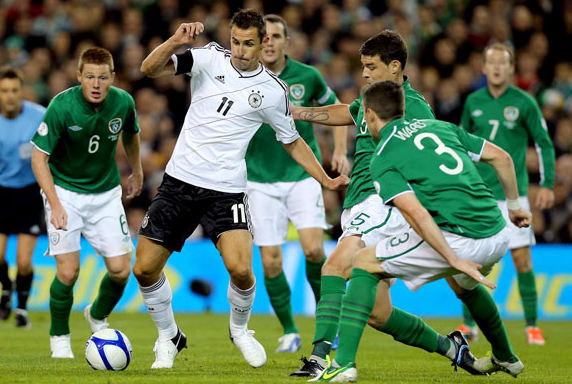 Deep inside we’re Yin and Yang
The foolish and the wise,
The brightest of bays,
And the darkness of nights,
Earth and the skies.

Polar opposites are currently at play.  There are the media outlets that seemingly are baying for the Italian blood of the Irish managerial set up.  Hoping for the end of the reign of Giovanni Trapattoni, Marco Tardelli and fitness coach Fausto Rossi.

There are the mixed feelings of supporters who recognise a decline in the effectiveness of the Irish set up, yet harbour the realization that limitations in player personnel are in place.

And there’s the defiant manager who won’t stop the fight to cling to what he believes in.  And on Monday night a captain who acted in solidarity, dismissing the Stephen Kelly and Marco Tardelli handbags as just that.  Clearly in his body language, repaying the loyalty Trapattoni has shown his captain, misguided or not.

This year, Rógvi Baldvinsson had a brief spell with Mark McGhee’s Bristol Rovers in League Two.  Having being referred to McGhee by former Ireland and Faroe Islands manager Brian Kerr, the spell was ultimately short lived.  The return home was apparently for personal reasons, regardless, club wise, Baldvinsson remains unattached.

Having played previously for Norwegian side Álgard FK, an opportunity to impress a Scandinavian audience presented itself in his country’s home qualifier with Sweden on Friday evening.  And twelve minutes after half time as the teams stood goalless, Baldvinsson coolly took a poorly cleared header by the Swedish defence on his chest and coolly slotted into the left hand corner of the Swedish goal,  to give Lars Olsen’s side the lead.  The striker turned centre back took the visitors by surprise and got himself a little needed attention.

Ultimately Sweden ran out 2-1 winners but the point is this Faroese side have something their visitors are particularly short on; confidence.  And having lost 3-0 to Germany in their previous qualifier, there might be some concentrated periods of possession tomorrow night for the home team.

Olsen has remarked, “Ireland are the favourites tomorrow, as Sweden were, but we will try to do our best.”  Mild words.  In private, the former European Championships winner with Denmark in 1992, will surely be stirring up a Nordic frenzy; one that he might genuinely believe will unsettle a team who have as much swagger at present as one would expect – none.

The hope is for an Irish bounce back and a rather large one at that.  It can’t be dismissed that in some quarters, there is a palpable hope for disaster and with it the dismissal or resignation of Trapattoni.  Regardless of the manager’s fate this week, anything but a victory in Torshavn tomorrow night will clearly hinder any qualification hopes.  A new manager won’t be able to take back points that should never be lost.

And with that in mind, Trapattoni has made three changes.  Head scratching and frustration over the exclusion of Shane Long will continue.  Robbie Keane will start and Jonathon Walters will join him.  Walters doesn’t lookout of place and had some of the few good Irish moments on offer against Germany in a thankless role.  He will unsettle the Faroese defence, given the service.

Maybe bearing this in mind, Robbie Brady has been called in to start his first competitive international.  For all the flair and attacking prowess of James McClean and Aiden McGeady, Brady seems to be a genuinely cultured footballer.  It’s still early in terms of development but the signs are there.  Ireland’s highest ever scorer at under-21 level and  a rounded performance against Oman at Craven Cottage.  The balls he delivers tomorrow should be weighted and accurate, a completely different skill set then that of Simon Cox.  In Brady, we dream a little.

Keith Fahey who was out of place and uncomfortable on Friday night makes way as Ireland revert to 4-4-2 and the central pairing of Keith Andrews and James McCarthy will be given its first proper opportunity as a duo.  Aiden McGeady will look forward to the prospect of seeing the ball and with it he should inflict some damage, but as always his ability to deliver the final ball is in question.

Darren O’Dea and John O’Shea will continue in central defence alongside Seamus Coleman who should enjoy the opportunity to engage with the Faroese defence.

Possibly more telling then Brady’s inclusion, is that Trapattoni has conceded defeat in a battle with logic and realised that as honest as Stephen Ward may be, he is not good enough for international football.  Not when you have a Premiership regular in Marc Wilson as an option.  And Wilson will finally be given the opportunity he has deserved for quite some time.

In this collection of islands, ultimately Ireland should disassemble their opponents and win; comfortably.  If that were not to happen, the questions asked might have only one answer.