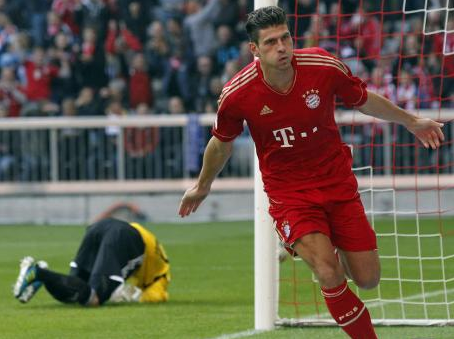 The two title-favourites Bayern München, the Bundesliga’s most frequent champions, and Borussia Dortmund, the current ones, enter the clash as the league’s top two teams. Bild is calling the game the “Finale um die Schale” – in other words the title will be decided by this fixture and its reverse later in the season. While it may not be as crucial as it is being touted as, with so many other fixtures to be played, there is no doubt that this is a huge game for both sides.

Bayern München started the season in thrilling form. Although they have been checked recently by a couple of poor results, particularly a 2-1 defeat at Hannover, Bayern remain the team to beat and are five points clear at the top. Franck Ribery has been in magnificent form, as has Bayern’s entire front-line, including the league’s top scorer Mario Gomez, who already has 13 goals to his name. Defensively, Jupp Heynckes’ side have also been the best in the league after their run of eight consecutive clean sheets was recently ended.

It has been a more difficult start to the campaign for defending champions Borussia Dortmund, suffering three defeats in their opening six matches. Particularly in the matches against 1899 Hoffenheim and Hertha BSC, defences have been more vigilant to the threat of Dortmund’s attack, and teams who have taken points from the Black-Yellows have tended to sit back against them. Added to that, without the playmaking abilities of Nuri Sahin, Dortmund have found it far more difficult to unlock opponents’ defences as effectively as last season. More recently, though, their form has greatly improved, taking them to second in the league. Since their September wobble, Jürgen Klopp’s side have won five of their least six league games, owing much to the improved form of their attacking unit.

So Bayern München and Borussia Dortmund enter the match not only as the two best sides in the league, but they are also both in terrific form. Without a doubt, this is not only the biggest match of the German season so far, but is also the most important and best fixture the Bundesliga currently has to offer. 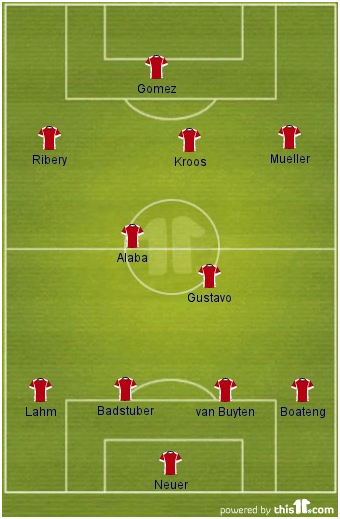 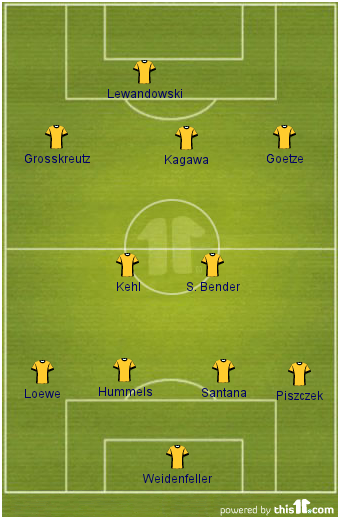 Bayern will probably be two players short of their usual line-up of this season, missing the injured Rafinha and Bastian Schweinsteiger. Daniel Van Buyten and David Alaba will probably replace them, with the minor adjustment in set-up of Jérôme Boateng moving to right-back.

Borussia Dortmund will be without defenders Neven Subotic, who is out until the new year, and Marcel Schmelzer, who is suffering from a calf strain. Felipe Santana and Chris Löwe should step in. Schmelzer’s form had been improving in recent weeks after a slow start to the season, particularly going forward where he has contributed more to his side’s attacks. In Löwe, they have an able, if inexperienced replacement, who has impressed when called upon by Jürgen Klopp. Otherwise, Robert Lewandowski should get the nod up-front ahead of Lucas Barrios, owing both to improved goalscoring form and his contributions to build-up play. Finally, this is probably not a game for Ilkay Gündogan, as the next section will explain.

The obvious justification behind picking Sebastian Kehl over Gündogan in the middle is that picking two defensive midfielders makes a lot of sense for a match against a side with the attacking credentials of Bayern, the league leaders and standout performers of the season.

Having said that, attacking duties will not be sacrificed with this move, which is why picking Kehl makes the most sense. The lack of form and penetration of the front-four earlier in the season was a consequence of selling playmaker and standout performer from last season Nuri Sahin, whose boots Gündogan has struggled to fill; it has been easier for opposing defences to source and nullify BVB’s creative threats. The most effective ones occupied the space between midfield and attack, Hertha BSC and Hoffenheim in particular, making look Dortmund’s attack look both ordinary and one-dimensional at times. As a result, Dortmund would have much of the possession, but saw little end product (Dortmund have averaged over 60% possession for the season, compared with last year’s 53%, despite the drop in form). But Klopp’s side have responded, and in recent weeks the front-four have gelled far better. Robert Lewandowski and Mario Götze, in particular, have been linking up excellently. And with Shinji Kagawa’s improving form, Dortmund have scored five goals in their last two home games in the league, and Mats Hummels is also an able contributor to creative play from deep.

One point to be drawn from this is that, going forward, Dortmund are starting to reproduce the performances and results of their title-winning campaign from last year, and are starting to adapt effectively to the absence of Sahin. The other is that with the front four adapting increasingly well to reduced support from midfield, Dortmund can afford to pick the slower, more functional Kehl, rather than Gündogan, without taking too much away from the attack, which will certainly be welcome news to the defence who will have their hands full against Bayern’s front-line. Kehl has found some good form in his protective role in recent weeks too.

The absence of Schweinsteiger for Bayern will be important, not least because of his consistent quality as the playmaker and the heart of the team. Added to that, his absence might relieve some of the pressure on Dortmund’s defensive-midfield duo. While it would be foolish not to pay due attention to Alaba (who is capable of midfield creativity just as Schweinsteiger is, albeit not at as consistent a level), there will be less need to press when out of possession in the centre of the pitch in the vice-captain’s absence, as Bayern’s creative energy is likely to come from elsewhere. This would allow Sven Bender to focus more of his attention on the more urgent problem of Franck Ribery. He and Lukas Piszczek would have to combine effectively in order to stop the Frenchman, who has been in scintillating form this season and has been probably Bayern’s best performer. If executed, this could be a highly influential individual battle Dortmund might win. Similarly, Kehl should be set to drop into deeper positions to assist Chris Löwe against Thomas Müller.

The game’s pivotal battle will likely be between Bayern’s attack and Dortmund’s defence. Bayern’s front-line has been in devastating form so far this season, especially at home, with 23 goals scored in five matches at the Allianz Arena so far this season (and none conceded either).

Dortmund’s defence has had a less reliable campaign to date than last year, and have depended, to a large extent, on Mats Hummels for leadership and stability at the back. Löwe and Santana may be more than competent replacements for the two injured players, who have not been on top form themselves, but Dortmund will probably need performances from their entire back four, not just Hummels, in order to prosper.

There’s little doubt that Bayern are favourites. They have comfortably the best attacking and defensive records in the league, and have won all of their home games at a canter. Jupp Heynckes’ side are also evidently much better than last season, and boast some of the league’s best performers this season, particularly Ribery, Müller, Gomez and Kroos, as well as Luiz Gustavo in the more defensive role.

Bayern have put themselves immediately on the front foot in each of their home games, scoring within the first 15 minutes in all of them, and within five minutes on three occasions. If they replicate that feat this weekend, it’s difficult to see anything other than a home victory.

Conversely, Bayern’s style could suit the visitors very well. Dortmund’s form has dipped when opponents have committed to defence. Having won the title last season averaging 53% of possession, Dortmund are a side who are most effective on the counter and from swift attacks. As opposed to the matches in which they have struggled this season, here they will have to defend, and can play on the counter, thus to the strengths of their attacking players, who are becoming increasingly effective without the support of a creative midfielder. The pace and link-up play of the front line could certainly cause Bayern’s defence problems if given the chance to shine. Despite the hosts’ impressive defensive record this season, there are lingering doubts over the quality of their back-four, which was effectively exploited by Hannover a month ago.

But while the visitors could be well positioned to play well in midfield and hit their opponents on the break, there is also the very distinct possibility that Bayern’s attack will simply have too much for them.

Easily the most important match of the Bundesliga campaign so far could go either way, and will feature two teams who play attractive, attacking football and boast an array of world-class individuals in their ranks. It promises to be an interesting and entertaining match between two high-class sides. If Dortmund can execute their defensive plans, possibly by doubling-up to defend against Ribery and Müller, they stand every chance of causing a surprise and taking something from the game given the attacking talent they possess. But Bayern will rightly be considered as favourites, and would go eight points clear of probably their only realistic title rivals with a win.