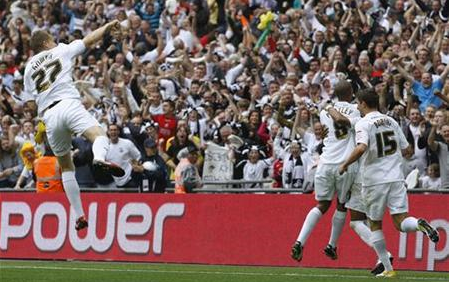 Fans of League One and Two clubs could be forgiven for looking at the significant distance between their beloved team and the big-time Charlies of the Premier League and deciding their side is destined never to reach the top flight. Given the gap in finances and quality of players, it’s a reasonable assumption.

But history can provide comfort for those who continue to resolutely believe that Accrington Stanley will one day march to the Premier League title, leaving Man United City in their wake. Three successful seasons is “all” it takes for a club to reach the promised land from England’s basement professional division.

A cursory glance at the 1991-92 Division Three table would surprise many a fan, and rightly so. Current Premier League sides Fulham, Wigan Athletic, West Brom, Stoke City and Swansea were all languishing in the third tier exactly twenty years ago – in fact, Swansea only survived relegation to the fourth division that season by five points. Teams flying high in the Championship this season were also mired in  Division Three mid-table mediocrity in 1991-92 – Reading finished in twelfth place, behind the likes of Brentford and Stockport County.

For more recent examples, look no further than the 2002-03 league tables. Just eight seasons before they would win promotion to the Premier League, Swansea were still battling in England’s lower divisions and even faced relegation to the Conference in 2003, surviving by just one point at the expense of Exeter City. Swansea learned their lesson and look what they have achieved since.

Taking Exeter’s place in the Football League were current Championship side Doncaster Rovers, fresh from Conference play-off victory, while even further down the league pyramid current League Two clubs Accrington and Aldershot helped themselves to themselves to Northern Premier League and Isthmian league titles respectively.

Granted, this year’s League Two consists of fewer big clubs. In recent years, Plymouth Argyle and Bradford City have worked their way to the top before suffering a slide through the divisions – the opposite journey to the teams outlined above. As recently as May 2001 the people of Bradford were enjoying Premier League football, but this season the Bantams could even drop in to non-league football.

Plymouth never quite made it as high as the top-flight, but if you had told Argyle fans in 2007-08, when they finished 10th in the Championship – just six points shy of the play-offs – that they would be battling for League Two survival in five years time, you would have probably been laughed at. The club’s downfall has been astonishingly fast – they were still playing in the Championship in 2009-10. However, financial difficulties have robbed Plymouth of their chance to reach the Premier League, an opportunity that now seems a lifetime away.

So while your tiny lower-league team of small-time professionals may look more like reaching the Ryman League than the Premier League, don’t give up hope. Clubs can shoot through the leagues with impressive speed, but be warned – the fall from grace can be just as fast if you’re not careful.