It’s hard at times not to feel sorry for David Moyes.

Seeing the perennially hapless Scotsman take charge at the Stadium of Light for the first time this season was a melancholic sight; the last time he set foot in the dugout on English soil, it was as manager of Manchester United.

Just over a year ago, Moyes was, by his own admission, relishing life in sunny Spain – and not missing England a jot. For money, he boldly proclaimed, is ruining English football.

It’s difficult to believe Moyes when, just a year later and with his smugness much depleted, he has returned humbled to the Premier League – although by his own admission this was always his intention.

He has not the gravitas of World Cup winning coach Joachim Löw, who equally vented against the Premier League’s pecuniary fetish, nor, any longer, the credibility.

In classic Moyes fashion, perhaps the strongest evidence for his claim – the £89m signing of Paul Pogba by his old club – came after the Glaswegian had returned cap in hand to the Premier League.

Now, Moyes’ public statements are greater in humility. He is no Che Guevara determined to lead a revolution against big money from his Hispanic outpost but a chastened Fabian resolving to reform within the system.

For Sunderland, the ceiling is apparently set at emulating Everton.

Given that Moyes’ United spent nearly £70m in just the single season the former Everton manager was in charge, one feels that they have to take his pontificating with a pinch of salt.

Yet there are far greater rumblings within English football against the apparent danger posed by astronomically soaring transfer fees.

Nevertheless, it’s hard to escape the conclusion that this is very much a storm in a teacup, the outcry of the jealous against the lucky.

The challenge for English football is not posed by the unprecedented rivers of gold running through the Premier League, but rather how this wealth must be distributed.

In nominal terms, transfer fees are undoubtedly rising – and whilst there is an appealing neatness to satisfying figures under £100m, the impending transfers of players for unwieldy sums upwards of this mark in the coming decade is not just inevitable but unproblematic.

That the world record signing has been made by an English club for the first time this millennium is unsurprising at a time when a record rights deal is set to provide a windfall to every Premier League club and swell their coffers enormously. 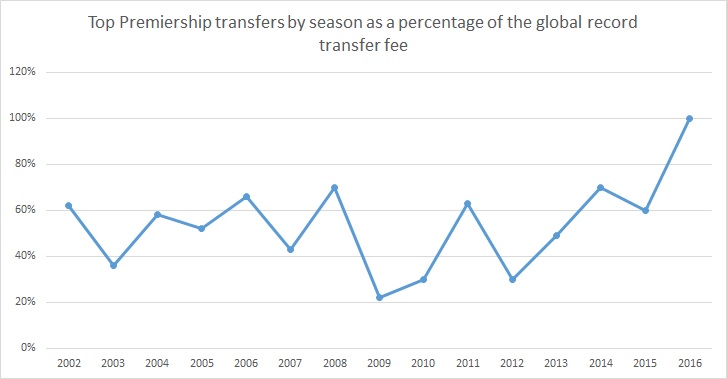 If the record Premier League transfer each season is taken as a percentage of the record transfer fee at that time to adjust for inflation in nominal value, English clubs don’t seem to be spending much more on their top players.

With the exception of this year and the Pogba deal, English clubs’ spending in real terms has been broadly consistent over the past fifteen years.

If television money has had an effect, it has been to increase average spend – but again, not especially out of step with inflation.

A quick Google of ‘Sky ruining football’ is enough to prompt thousands of hits, on supporters’ forums from Arsenal to Celtic.

Yet for all this popular trope, the lazy myth that it is rights deals ruining the Premier League is just false.

Whilst increased rights money provides a nice boost to the spending power of clubs like the two giants in Manchester, it is hard to imagine that either club would have had a dramatically different transfer window in seasons previous.

More important in boosting money in English football is the rise of equity groups like that of Tony Xia, who this summer added Aston Villa to what the Financial Times describes as an already ‘eclectic portfolio’ of investments.

Dr. Xia is not alone; just over half an hour away, Shanghai based Fosun International have been funding a spending spree at nearby Wolverhampton Wanderers that saw Anderson Talisca credibly linked (albeit ultimately in vain) to the Championship club for £20 million.

Whilst fans, for right or wrong, see television companies like Sky and BT Sports unevenly giving money to the more marketable clubs, the market has its own corrective to the predominance of the traditionally bigger clubs when it comes to equity groups.

In the last two years, clubs without the lustre of the top half – from the Yunyi Guokai Sports Development Limited Group purchasing West Bromwich Albion to Chicago based Peak 6 buying 25% of AFC Bournemouth – have been the subject of attention.

There is more potential in smaller clubs as business acquisitions and lower buying costs up front, and these clubs aren’t being left behind.

The effect of this has been less to push the pinnacle of transfer spending higher but rather to increase the purchasing power of middle order clubs – saturating the market.

Whereas previously transfer battles would be the scene of European giants battling it out for a star striker, now the price of players like Georginio Wijnaldum is the same as that of Robin van Persie just four years ago.

In this light, the signing of John Stones for nearly £50 million by Manchester City – which has generated much criticism – makes much more sense.

At the same time, it is worth remembering that as far back as 2002 Manchester United paid almost £30 million for a young Rio Ferdinand, another centre back lauded for his ability to play out from the back.

Championship fans have been louder still in their condemnation of money in English football – yet aren’t any more right.

If the top Championship transfers each season are taken as a percentage of the global record transfer fee and compared, the seemingly exorbitant prices paid for Ross McCormack in the last half decade only take Championship spending in real terms to the same level as seen as far back as in 2006.

Further, whilst the English transfer record has increased by 2.3 times in the last decade, it is by 2.4 times that the Championship has grown. 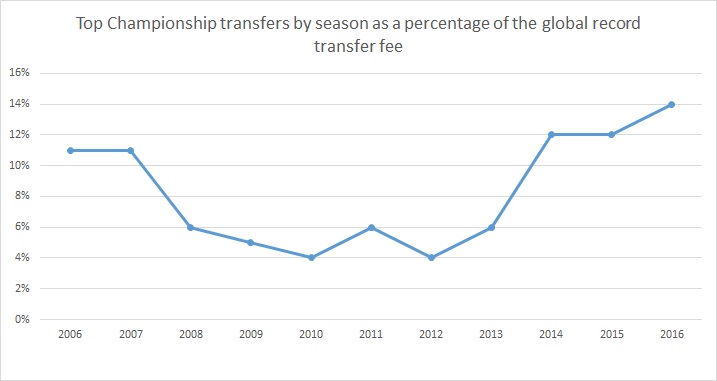 Whilst Tony Xia’s Recon Group and Fusun at Wolves are ultimately banking on their charges reaching the promised land of the Premier League, their investments are rooted in the Championship – and raise the standard of the league accordingly.

If anyone suffers, it isn’t Championship clubs as a whole but rather those either unwilling or unable to spend.

It might be a heart-warming success story when clubs like Ipswich Town reach the play offs with a squad costing just £110,000, but that this is not routine is hardly a problem. Football is a competition, and those clubs who don’t commit to keeping up get left behind.

Ipswich, who in an inflated market received a fee rumoured to be between three and five million pounds for 33-year-old Daryl Murphy, can hardly complain.

With UEFA distributing revenue from the Champions League more in favour of historically successful clubs from 2018, the challenge is not for the league to limit spending but rather to ensure that access to capital continues to be spread equally so as not to entrench an elite class.

In that regards, neither the Premier League nor money itself is the problem – rather, it is increasingly UEFA.

Student and football fan. Aspiring Guillem Balague but have more in common with Chris Kamara. Managing to support both Ipswich and Galatasaray which, like being indifferent to marmite, makes me a bit of an oddity.