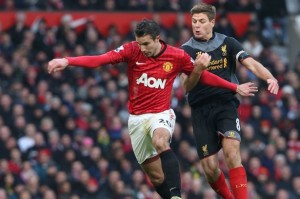 Manchester United against Chelsea on Monday night was a right old let down, at least for the neutrals. That is unless they enjoy having a nap in front of the telly – courtesy of their Sky subscription. I heard somebody mention that the sight of the 0-0 result on teletext made the game look more exciting than it actually was. Now I’m not sure that makes sense, but it gives you some idea as to how little excitement there was.

Next up for David Moyes’ men is a trip to Liverpool and you can expect a very different, more exciting game – with a few goals thrown in for good measure.

Despite Liverpool only scoring once in each of their Premier League wins so far, Brendan Rodgers’ men registered a massive 25 shots on goal against Stoke on the opening day, with 11 of those finding the target. Asmir Begović was superb that day and on another the Reds could have had a lot more. A less adventurous effort followed away to Aston Villa, but it won’t put me off now that the Reds are back in Anfield against their fierce rivals.

Man United put four goals past Swansea in their opening fixture before Monday’s drought. If you didn’t watch that game, Chelsea were very happy to go to Old Trafford in search of a draw and United didn’t do enough to break them down. But come Sunday, Liverpool will be attacking in front of their home fans and both sides will want to win. Kolo Toure’s absence through injury is a big loss to Liverpool as he had begun to form a solid looking partnership with Daniel Agger. United’s defence is far from perfect either, looking vulnerable at times at Swansea and rarely tested against Chelsea.

There’s little chance of you falling asleep on Sunday afternoon. And if there are three or more goals in the match, I’ll be singing and dancing – not napping.

Canaries on offer at decent price

Norwich welcome Southampton to Carrow Road this Saturday in search of their first win of the season. The visitors had already bagged three points on the opening day at West Brom before rescuing a point at home to Sunderland.

I say it all the time but finding the value in football betting is key. It doesn’t have to be a glamour tie, as all that matters is that the price is right. And the price about a Norwich win here certainly looks good to me.

Chris Hughton’s men have played better than the bare results show and they have some real quality in their ranks now. The return of Anthony Pilkington to the team gives the Canaries a major boost, while new signing Elmander may be utilised more at home as an attacking option. Nathan Redmond has looked promising also and this Norwich team are well capable of putting Southampton to the sword.

Mauricio Pochettino’s side did look dangerous against Sunderland, but their failure to convert their chances that day as well as a lack of chances made away to West Brom on the opening day leaves questions to be answered.

At the current odds, I am tempted by the 21/10 available about Norwich, but I believe the ‘draw no bet’ option offers the best value here early in the season.

Bet Selection
Norwich to beat Southampton (Draw No Bet) at 11/10.