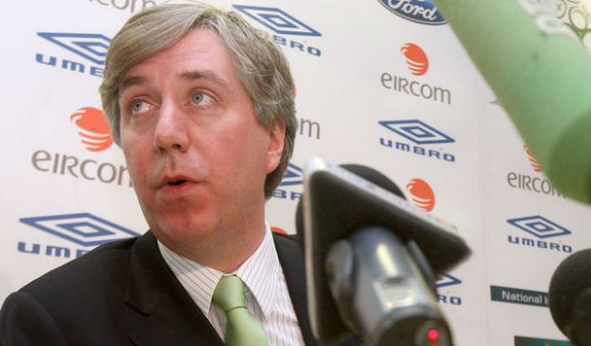 Lansdowne Road on Friday night and the final whistle is greeted by a chorus of boos from a significant portion of the crowd. The shambolic second half performance, a string of misplaced passes, some clumsy challenges and the odd infuriating substitution meant that such a reaction was not unexpected. The 2-1 defeat means Ireland have lost any real chance of qualifying for Brazil 2014. The cock-eyed optimists working out permutations involving Irish wins in Vienna and Cologne will point to mathematic possibilities but most of us realise that the remaining games can only benefit Ireland by possibly regaining some national pride and protecting a seeding coefficient.

The early elimination is perhaps a lesser cruelty, hope is the thing that kills you, losing to Sweden and in such an abysmal fashion is perhaps kinder than if Ireland had snatched an undeserved draw and gone into the upcoming fixtures still believing there was a real chance of World Cup qualification. It also means that Giovanni Trapattoni’s tenure at the Ireland helm should end with a whimper, in a likely meaningless match against Kazakhstan next month in what will surely be a half empty stadium. The Italian will limp on as a lame duck manager for the remaining three fixtures but it seems unlikely that a new contract will be forthcoming.

For many Irish supporters this will be a source of comfort and indeed renewed expectation. The “Trap Out” brigade have been vocal from even before Euro 2012 and the chastening defeats in that competition followed by the 6-1 shellacking at the hands of Germany garnered support for their cause. The end of this qualifying campaign should give them their wish, but where we go from here remains unclear. While Trapattoni brought stability and some form of respectability, not to mention a tournament qualification after the omnishambles of Steve Staunton’s reign, the style of football his sides have played has been regularly derided. He also has the unfortunate habit of falling out with or alienating players, from the cause celebre of Andy Reid to the more recent spat with Darron Gibson. The initial thrill of having an internationally famous, avuncular and eccentric coach has worn off and Irish fans are ready for a change. However the question remains how likely is it that we will see real change?

While a new manager may come in and bring Gibson back into the fold, find a role for Wes Hoolahan and Robbie Brady, play somewhat more expansive football and rebuild a sense of confidence and unity that has seemed lacking since the Euros how much of that role will be papering over the cracks? Trapattoni has been rightly criticised for seeking to shift blame from his shoulders onto those of the players who he routinely points out are not as good as those available to Spain or Germany, yet fails to acknowledge that countries with similar or indeed fewer resources than Ireland also out-perform us. The truth is somewhere in between, Trapattoni seems to have lost the buy-in from his players, his systems are dated and have failed to adapt to UEFA qualifying groups full of more rapidly-progressing, technically proficient smaller nations. But Ireland are also not producing players of a high enough technical calibre to effectively copy these systems.

While people may scream “what about Wes Hoolahan?” it is worth noting that Wes is 31, he was 26 when Trappatoni handed him is debut five years ago. Although he has excellent technical ability he is hardly the future of Irish football, the worry is that we are not producing players of his technical standard to come into the team. We are to an extent reliant on other Associations to produce our players. Some of the most technically proficient players in recent Irish squads would include the likes of James McCarthy, Aidan McGeady and, prior to the Euros, Darron Gibson, all players that came through the youth systems of Scotland or Northern Ireland in some cases not declaring for the Republic until senior level.

It seems a long time ago that Irish fans were in a lather of excitement at the potential of a young Damien Duff or Robbie Keane. This will continue to be the case as we lag behind associations like the IFA and the SFA in terms of coaching. According to the latest UEFA stats on Coaching levels the FAI has 500 coaches at UEFA B level, 110 at UEFA A level and 31 with a Pro licence. Northern Ireland with a third the population of the Republic have 1,150 at UEFA B level, 148 at UEFA A level and 61 coaches with Pro licences. The comparisons with Scotland, or Norway, Denmark, Croatia and similar nations tend not to be too flattering either.

Among the other most impressive “younger” players for Ireland in recent years would be players like Shane Long or Seamus Coleman, discovered by League of Ireland managers when playing junior football for unfashionable clubs. In Coleman’s case it was only a standout performance in a pre-season friendly for his club St. Catherine’s v Sligo Rovers that set his professional career in motion. The point being that the better technical Irish players coming through now are either the youth products of other associations which makes the FAI reliant on other coaches and systems producing Ireland’s raw footballing materials or they are players who come through practically under the radar of the FAI which points at failings in the stated aims of the FAI emerging talent programme. In the case of Coleman a player from Killybegs in Donegal the regional centre in Letterkenny should have been tasked with spotting Coleman as a talent and developing him. Perhaps this was hampered by the fact that as far back as 2005 a new stadium and sports centre in Stranolar, Donegal was planned this would have been home to a FAI Regional Development Centre as well as home for local club Finn Harps. Work has ceased on construction due to lack of funds.

That lack of funds seems to be at the heart of the FAI and its inability to follow through on its grand plans for youth development and elite, high performance training for young players. Despite selling their Merrion Square headquarters in 2007 for a fee “in excess of €6 million” and moving to the National Sports Campus in Abbotstown it was only this year that work began in Abbotstown on building “training facilities for elite players and underage international squads”, these development works were only made possible because of grants totalling almost €900,000 from UEFA and the Irish Government. With this reliance of outside funds it would seem that Finn Harps will be waiting a while longer for their new stadium. It also further highlights the financial priorities of the FAI.

Earlier this Summer UEFA finance director Josef Koller spoke about having to advance funding to one of the FAI’s main creditors Danske Bank to help meet the Association’s financial commitments towards the Aviva Stadium. It has been reported that this money (which the FAI won’t comment on) was an advance of UEFA “Hat-Trick” funding that is due to each member association. The stated aim of this funding is to support among other things “youth-development competitions for boys and girls, developing futsal [and] Implementing UEFA’s Club Licensing scheme”. In essence this funding is going to cover a shortfall on the mortgage the FAI took out to build the Senior Team a new home that it will never even own.

The FAI financial model seems to be spend heavily on the Senior Team with the hope that this spend will drive on-pitch success which in turn will generate income through sponsorship, high attendances and tournament qualification which can be invested in developing the game down to grassroots level creating a virtuous cycle. The Aviva Stadium redevelopment was embarked upon during the Celtic Tiger era with high expectations for long term and high value ticket sales which never materialised. However the major expenditure on salaries for Trappatoni and his management team took place against a well-documented background of financial uncertainty. The Association obviously felt that youth facilities could wait, and certain staff contracts would not be renewed, including Technical Director Packie Bonner and Regional Development Staff the type of people tasked with finding and developing the next Long or Coleman.

Just how massive the debt liability of the FAI is, and how capable the FAI is of repaying it remains somwhat unclear, the FAI cancelled its usual press conference at its most recent AGM and various officials refused to answer questions on the Association’s accounts. Although qualification for Euro 2012 was worth millions to the FAI the turnover of the Association declined from €45 million to €39 million last year. Despite this John Delaney and his officials maintain that the Association is on course in its targets to be debt-free. The refusal to discuss accounts or to respond to Josef Koller’s comments about UEFA bridging loans to Danske Bank give the FAI the appearance of some crumbling Iron Curtain area regime, who refuse to answer questions or admit there is any problem. John Delaney seems a laconic Comical Ali as the American tanks roll over the horizon.

When we look to lay all the problems of Irish football at the feet of Giovanni Trapattoni let’s remember that while Trap may have to accept his share of the blame he is certainly not alone, he is merely the most visible target, and unlike his FAI paymasters he has to attend his press conferences and at least try to answer for the failings of his players and his own management. Changing the manager of the Senior team won’t produce more players of higher technical ability, the best we could hope for is that a new manager might rebuild relations with estranged players or may identify players available under the parentage rule, produced by the youth systems of other associations, who may improve the Ireland squad.

If we are to bring in a new man to put our footballing house in order and improve our senior team let us at least make sure that we are giving them the raw materials to work with. Until such time as youth development becomes a real priority and passionate coaches like Noel King and Paul Doolin are given the facilities and structures to get the best out of the raw talent available in Ireland our Senior team will continue to rely on players who succeed in spite of and not because of the system.