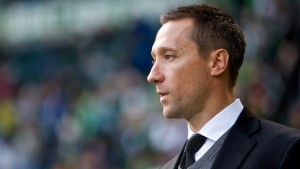 On Saturday Afternoon, Portland Timbers comfortably dispatched the Western Conference league leaders FC Dallas in front of a packed out crowd at JELD-WEN Field 1-0 to stretch their unbeaten streak to a club record 13 games.

The Timbers now rest in third place in the Western Conference having played 15 games, racking up on average 1.73 points per game (third in MLS overall) . This time last season, Portland were already flirting with the prospect of missing out of the playoffs which, only a month later, consequently led to the sacking of the lovable Scotsman John Spencer on July 9th to be replaced by interim head coach and GM Gavin Wilkinson.

So what has changed since the 2012 season? The answer to that is relatively simple, the introduction of former Akron Zips (a college soccer team) coach Caleb Porter.

Since Portland joined MLS through expansion back in 2011, the Oregon – based side have always been renowned to have arguably the most passionate and loyal fan base in MLS, consistently attracting sell-out crowds for every league match whilst creating an incredibly energetic atmosphere. Off the pitch, the dedication of the fans surprised many amongst fellow supporters and this is no different to the side that Portland put on the pitch. It truly is a community club. Only last month, a recent event was held for a child named Atticus, an 8-year old fighting cancer. Through Make-A-Wish, Portland’s players and staff came together to host a match for Atticus’ team to play a small sided game at JELD-WEN Field with a large number of first team players taking part. The fans got involved too and the game was watched by 3,000. Portland is a club who are deserving of success on the pitch, Caleb Porter has been brought in to try and achieve that. 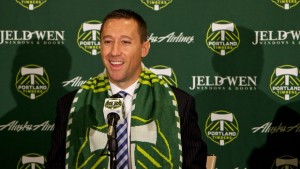 On August 29th 2012, Caleb Porter was announced as the new head coach of Portland starting from the 2013 season. The MLS community greeted the announcement with much skepticism. This was a man who had only ever managed at college level prior to becoming the Timbers manager and was most known for his inability to guide the US U-23s into the Olympics even with the talent available to him. However, at College level his credentials were impressive. The 37 year old’s team, Akron Zips, played an attractive, free-flowing form of football, winning a national championship in 2010 whilst Porter himself recorded the highest win percentage out of any current College coach. Furthermore, Porter reached more career wins quicker than both LA Galaxy head coach Bruce Arena and Seattle Sounders’ Sigi Schmid before they made the leap to MLS. Questions were also raised about Porter’s personality, some regarded him to be slightly arrogant, self-centered and egotistical – someone who regards himself as better than the club he manages. Although those questions still linger, Porter has shown himself to be a humble and calming presence in press conferences so far this season.

Porter began his reign by making a number of acquisition changes to change Portland from being a very direct, physical outfit to one which can play a free-flowing attractive brand of playing. The first move was to get rid of designated player Kris Boyd who was not considered ‘athletic’ enough to fit in with Porter’s philosophy (sound like Brendan Rodgers with Andy Carroll?). The DP slot was taken up by Diego Valeri, a number 10 from Argentine side Lanus (formerly of Porto) on a season-long loan. He has been a catalyst for Portland’s change in fortunes in 2013, four goals and four assists in 13 starts is pretty impressive whilst also contributing greatly to build up play and tends to dictate the tempo at times.

The trade for Will Johnson from Real Salt Lake in exchange for allocation money also looks to have been a fine decision made by Porter. The Canadian, who was instantly given the Captains armband upon arrival, adds a layer of grit to the team and acts as a double pivot alongside the rejuvenated combative Colombian Diego Chara – another of Portland’s DPs. Other honourable mentions are Ryan Johnson from Toronto; the Jamaican fulfills the mould of a pacey, athletic striker with four goals and four assists to his name in 12 starts. Frederic Piquionne, who will be familiar to many Portsmouth and West Ham fans, has also been a solid backup who can act as a more physical presence when required and has been instrumental in the Timber’s recent US Open Cup victories. Mikael Silvestre also offers a wealth of experience as part of the backline. Porter has acted intelligently in the market and has found players who seemingly fit the style of play he is implementing. 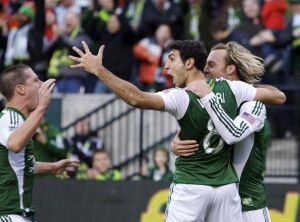 Not only is it the players that Porter has brought in that have been changing the overall mentality of the club but also the ones who were already there. Darlington Nagbe, who was a member of the Akron Zips’ championship winning side in 2010, looks to be fulfilling the expectations set of him when entering the league in 2011. He offers pace, creativity and flair which has led to fans feeling he deserves a call up to the US men’s national team, he has five goals and two assists, only one goal less than he scored all of last season and three more than in 2011. Also, Jack Jewsbury has slotted in nicely into right back after being predominantly a centre midfielder. He is solid defensively and is beginning to become more threatening in the attack, timing his runs well.

The Costa Rican Rodney Wallace has also become far more threatening. His shift to a left winger has helped in generating more pace and directness into the side, stretching the pitch and enabling the likes of Valeri and Nagbe to find more space in between the lines. Porter is finding a way to maximise the ability out of his players and so far, it’s looking good.

The 2013 season hasn’t yet reached midway point yet but the signs for Portland are promising. Porter’s management style, his knack of finding a good player, his strong tactical knowledge and his ability to see squeeze the potential out of his players has been evident thus far. Portland is beginning to form an identity not just as a team but as a community club. If the team can keep winning and progress deep into the MLS playoffs then Portland could become a side which their fans can genuinely be excited about. The expectation is on Porter. He is delivering thus far, but must continue to do so.