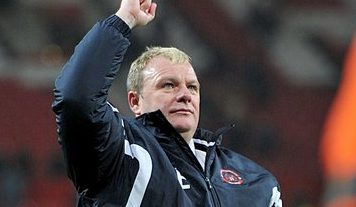 If you mention Crawley Town over a pint at the pub, you’ll get several different reactions.

Some will think of last year’s Blue Square Bet Premier champions as the team who ran Manchester United close in the fifth round of last season’s FA Cup, epitomising the romance of the world’s most famous cup competition.

Some will talk about Crawley as the “Manchester City of non-league” who splashed some £500,000 on players to reach the promised land of the Football League for the first time.

Some will think of the controversial face of the club, manager Steve Evans, the outspoken boss with the conviction for tax evasion whilst manager of Boston United.

Come May, many could be talking of them as the League 2 champions.

The Red Devils lost for the first time in 34 league games when they were defeated 3-1 at Cheltenham on Saturday but the early season favourites are still third in the Football League’s bottom tier, three points behind leaders Rotherham.

Their good early season form includes convincing wins over Southend and Torquay and there’s no reason Evans’ side won’t be at the sharp end of the table come the end of the season.

The Crawley boss has an impressive squad at his disposal, including £70,000 striker Matt Tubbs who is already amongst the goals as he makes a successful transition from non-league to Football League.

After winning promotion, Evans also added the likes of Tyrone Barnett from Macclesfield and former Everton youngster Hope Akpan as he looked to match the high expectations at the Broadfield Stadium.

The club will also have the power to buy further if results go against them, which they inevitably will. It will be how a side so used to success reacts to defeat that will shape their tilt at a second consecutive promotion.

Crawley aren’t the most popular of clubs, as the derision that met their attempts to sign Robert Pires as part of the ultimately successful “project promotion” proved. Their cause isn’t helped by the team who came up with them AFC Wimbledon, the fans’ club’s ascension to the Football League being one of this, or any other season’s fairytales.

But that won’t bother them, as it shouldn’t, as they provide further proof of the non-existent gap that now lies between the top tier of non-league football and the bottom tier of the Football league.

There are all the signs that United’s reds won’t be the only Red Devils tasting success this season.

One thought on “Popular or not, Crawley Town look set for title tilt”