Long before an ‘El Clasico‘ in Miami in the sweltering heat of July, or over 100,000 came to a Manchester United game in the midwest of America, many of the biggest European clubs could regularly be found touring North America during the 1950s and 60s.

In those days, football was less globalised – Summer football tours were a combination of an unusual spectacle and a chance for expats to support their compatriots, rather than the marketing exercise in which locals can express their support for foreign teams in the way that friendly matches are today. 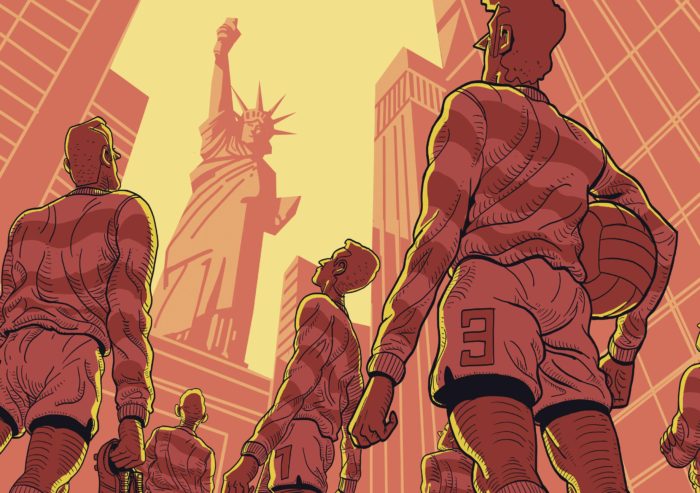 The exhibition games played back then were generally far more heated encounters than the preseason affairs today – think of the pride involved in modern rugby test games rather than the glorified fitness exercises and money-makers which these meetings are today.

Glasgow Celtic, as a club which appealed to the large Scottish and Irish populations of North America, toured several times throughout the 1950s and 60s.

One such year was the summer of 1966 in which they played 11 games in Bermuda, the United States, and Canada. Little did they know then that the coming season would end as it began – in a foreign summer sun – as they would immortalise themselves one hot evening in Lisbon against a defensive and seemingly unbeatable Inter Milan to win the European Cup.

Several members of the ‘Lisbon Lions’ team have since expressed that the trip to America laid the groundwork for the quadruple-winning season that would follow. Legendary manager Jock Stein saw the trip as both a reward for the team’s success in the previous campaign and a chance to experiment with the side. He made several tactical changes which led to one of the most notable attack-minded football teams in history.

For a bunch of boys from Glasgow, the sunny beaches visited across Bermuda and America must have felt several universes away from the flats in the Gorbals or Castlemilk. Accordingly, and somewhat appropriately, Jinky Johnstone, ever the rogue on the field, missed several games of the tour after a dose of sun poisoning.

Celtic went unbeaten in the 11 games on tour, taking on the likes of Bayern Munich and Tottenham as well as more colorful sides such as the ‘Bermuda Select’ and the ‘New Jersey All-Stars,’ a team largely comprised of Scottish and Irish expatriates. The game against the All-Stars was played in the town of Kearny, New Jersey which was a hotbed of Irish and Scottish immigrants, and home to the first American Celtic Supporters Club.

Months before putting on a footballing clinic against a world-class Italian side, Celtic did the same in the shadows of New York City against Bologna, who were the second-best Italian team at the time.

The game was played on a baseball field which became somewhat shambolic in the pouring rain, with cinder blocks occupying one section of the pitch. Despite ending in a 0-0 draw, Celtic produced a display which put their opponents to shame. The pro-Italian crowd began hurling bottles onto the field to show their discontent, making the game almost unplayable in the second half. In one of the final matches of the tour, Celtic drew 2-2 with Bayern Munich in San Francisco in a game that was marred by a brawl which stopped play for seven minutes.

The Celtic team which went on to win the European Cup stands out in the history books largely because all of the starting XI were born within a 30-mile radius of Glasgow.

In a fashion similar to the way artists would retreat to spectacular environments before producing masterpieces, the Lisbon Lions had experienced the salubrious air in Bermuda and the palm trees in California before they sent shockwaves across Europe for their cultured and innovative approach to football.

Eugene O’Driscoll is an Irish New Yorker who, outside of his footballing interests, is a historian. Twiter: @theresonly1geno

JP Peer is an illustrator from Phoenix, Arizona whose interests include Korean food, 1980s Brazilian football and Arsenal. www.jpeerart.com

This article appears in the brand new Issue 4 of the Póg Mo Goal Magazine. Click this link to order your copy.