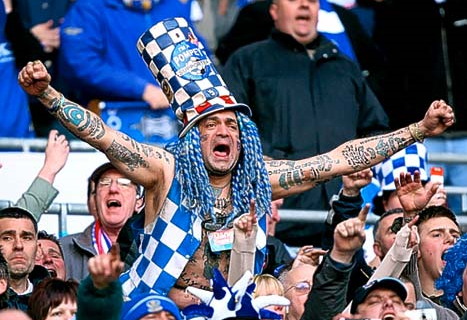 If ever a club stood as a cautionary tale in the modern game, it would be Portsmouth.  Back in 2008, they won the FA Cup and finished 8th in the Premier League. But just a few years later Pompey were skirting with the possibility of relegation to the bottom tier and facing a real chance of going bust. Few clubs have soared so high only to be brought so low.

Ultimately, although the club failed to avoid the drop, Pompey did manage to stay in business. But this was only possible because of a supporter-led buyout. After a period of fourteen months in administration, on 10th April 2013 it was announced that the Portsmouth Supporters Trust, in conjunction with a handful of local investors, had agreed a deal to take control.

For Pompey, it was a much needed lifeline. Prior to that stint in administration, the club’s second in just five years, Portsmouth had burned through a small fortune, much of it borrowed.

Lots of clubs acquire debt; the nature of football today makes it almost inevitable. Escalating wage bills and a transfer market that often defies sense, combined with an inability to match costs on the revenue side means that borrowing is an unavoidable consequence. But for a club of its size, Pompey took debt accumulation to new levels. At one point during the downward spiral to the bottom tier, Portsmouth owed £135m, a staggering amount for a club with an average home-gate of around 20,000.

Were it not for the fans, who managed to raise £2.5m to assist the buyout, it’s likely that this former Premier League high-flyer would have been consumed by its debts. But it wasn’t and Pompey lived to fight another day. And for many of those interested in supporter ownership, by doing so the club now provides an interesting experiment in how far this model can go.

Although here are several supporters trusts that have gained a stake at clubs that play in the higher reaches of the game, such as Swansea, Arsenal and Norwich, majority ownership by the fans tends to be confined to the bottom tier and amongst clubs, such as AFC Wimbledon, Exeter City and Wycombe Wanderers, that are also very unlikely to ever make it to the Premier League.

But this isn’t the case with Portsmouth. The club might be down in League 2, but Pompey are still a relatively big beast. And one that has the potential to be even bigger.

So far this season, the club has been averaging crowds of around 15,000 at home, with a high of just over 18,000 for the campaign opener against Oxford. The nearest league rival in terms of attendances is Plymouth, who only manage around 7,000 a game. In fact, Portsmouth’s crowds dwarf the League 2 average, which stands at 4,250 per match. If you’re looking for a more direct comparison for crowd size at Fratton Park, then it’s best to cast your eyes much higher up the pyramid. Pompey’s average gate of 15,000 is more in keeping with Championship sides such as Wigan Athletic, QPR and Watford.

And this ability to generate income from the fans could be further enhanced if the club is one day able to redevelop its ground or re-locate to a new stadium. Although this seems unlikely in the short term, after all Pompey are still recovering from a financial meltdown, in the longer term if the club wants to progress and do so sustainably, then greater capacity at their stadium, including the development of better corporate facilities, would be fundamental to this.

And in terms of supporters, there is every reason to believe that they would be there to fill any extra space. Considering the fall from grace, Pompey’s fans have been amazingly loyal; 18,000 people for a League 2 clash with Oxford being illustrative of this. This could easily be improved if extra capacity and an improvement in form occurred. After all, Portsmouth is a city with a population of just over 200,000, with a wider catchment of around half a million people and which contains no rival club for Pompey to compete against for attention.

But the key to everything is form. And sadly, it would be fair to say that the club’s inaugural season under supporter ownership hasn’t been a runaway success. From the off, Pompey have struggled. In fact, so poor has their form been that the club has only recently achieved mathematical safety, banishing what for a time seemed the very real possibility of relegation out of the Football League.

Some degree of hangover was always likely. After all, the fans have inherited a football club that has been battered and pretty much hollowed out by previous regimes. In fact, it’s difficult to think of a club in England that has had such a dramatic fall from grace or one that has suffered so much financial turmoil. And in our modern game that really is saying something.

Despite this, if the supporter ownership model is to survive and prosper then an improvement in the coming years is a must. The club has asked a lot of the fans over the past five years and in response they’ve proven to be breathtakingly devoted. Not only have many dug deep into their pockets to bail out the club but attendances have also remained impressively high even as Pompey plummeted downwards.

The success of supporter ownership will be dependent on the continuance of these two factors. Without strong attendances and the existence of fans willing to support the club financially, two factors that would likely be damaged by further disappointing seasons, the ability of the trust model to survive and capitalise on the club’s potential would be seriously undermined.

And that would be a shame, for both the followers of Pompey and also for anyone who believes in the virtues of supporter ownership. Prior to their rescue by the fans this was a club that embodied everything that is wrong with the modern game. Over-spend, shady owners, debt, administration; in many ways the club became shorthand for football’s failures. But if all that turmoil, all those years of suffering under private owners could be contrasted with a period of success and sustainability under a model where it’s the fans that call the shots, it would provide a beautiful narrative. And one that could do wonders for the cause of supporter ownership.