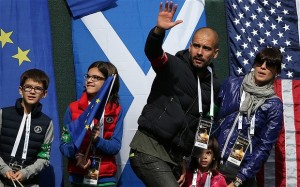 It has been yet another poor season for the New York Red Bulls both on and off the pitch. For a team aiming to become a global brand, not winning an MLS Cup in the franchise’s history is simply not good enough for a team filled with stars such as Rafa Marquez, Tim Cahill and, of course, Thierry Henry. The 2012 season was no different as they were knocked out in the first round of the play-offs.

On the Marketing side it has been disappointing as well. Red Bull Arena has been half empty throughout the course of 2012 and the stadium’s location does not help that, the NYRBs have done very little to try and bring in fans from all across New Jersey and proven themselves to be a very mediocre club all around.

Last month, New York sacked manager Hans Backe due to a disappointing two year campaign at the club and are currently without a manager. There have also been big changes in the front office with general manager Erik Soler being replaced by former AS Monaco technical director Jerome de Bontin taking his place. A very well known man in the football world in the shape of Gérard Houllier has also stepped in as the Head of Global Soccer and perhaps most importantly, former UEFA technical director Andy Roxburgh has recently been appointed sporting director. So what does this all mean for the MLS organisation? Connections.

Roxburgh, in recent Q&A sessions, has been calling for his team to start placing a greater emphasis on youth and introducing more home-grown players into the New York set up. Who better a man then to bring up youth players and develop an attractive style of play to draw crowds in than 14-title winning, FIFA Coach of the Year Pep Guardiola?

As we all know, Pep is currently on a one year sabbatical in, yes, New York, after expressing his desire to take a break from the stresses and strains of managing the best team in the world in which he developed from the ground up. It is clear though that Guardiola wants a challenge for when he returns. Managing the Red Bulls would suit Guardiola on so many levels. 1) The media attention on his work would not be as intense as managing a high level team in Europe, 2) He would not have to relocate his family and finally 3) if would be a fantastic and unique opportunity to instead of developing a team, he would be developing a whole league.

Of course Guardiola being part of the league would work nicely for Major League Soccer as well. It is clear that with the Beckham experiment now reaching its conclusion the league will face a challenge to try and stand on its own two feet with the departure of a man who brings worldwide recognition to what he has contributed heavily to developing one of the globe’s fastest developing leagues. If Guardiola could implement his tiki-taka formula to an average New York team then no doubt, the crowds and broadcasters would come flocking in. The combination of a front office filled with experience and a vast wealth of connections alongside one of the best managers in the world would be a mouth-watering partnership which any club would strive to have.

The chances of such a miraculous occurrence to happen for both the New York Red Bulls and the league as a whole are very unlikely. Guardiola has already been heavily rumoured to take over the helm at a number of top clubs in Europe and taking over a job in the States seems unlikely, particularly when considering that Pep would have to cut his year out short. Yet if a matured Guardiola wants a greater test then what he has ever done before then finding it in Europe could be tough.

If he wants to revolutionise the beautiful game even further and prove to be an all time great then instead of changing one team, how about changing a whole league? New York has been able to persuade ex-Barcelona stars to come in before, one more couldn’t hurt them.