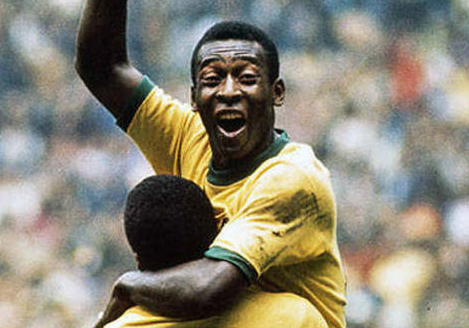 He was born Edson Arantes do Nascimento, but is known throughout the world simply as Pelé. The origin of the nickname given to the man who just celebrated his 73rd birthday is far from certain, but, as ever, an Irish footballing myth gained legs over the years. With a movie on his life now shooting in Brazil, could the story make it to the big screen?

Born Oct 23, 1940 in Três Corações, Pelé has often stated that the meaning of the moniker is unknown and that it was given to him causally as a young boy. The word has no translation in the Portuguese language.

The ambiguity around how the nickname came about meant a theory put forward by RTE’s own Jimmy Magee gave rise to a sporting myth that gained traction over the decades, though it’s little heard of in Brazil itself.

The legendary Magee met Pelé on a number of occasions but it was their first encounter in Sao Paolo ahead of the 1974 World Cup in West Germany that led to an Irish connection to arguably the game’s greatest player.

In a recent interview with Miriam O’Callaghan, the ‘Memory Man’ Magee explained how a 20 minute meeting ran into three-quarters of an hour as the two discussed their love of football.

Pelé revealed that he didn’t know the meaning of the nickname he had inherited as a schoolboy. It was Magee who proffered a hypothesis.

“I had an idea. I gave him a story that an Irish-speaking missionary priest was in Brazil in Pelé’s poor part where he was born and raised.”

Watching the young Edson play on the street with a ball of paper, the priest remarked on the “buachaill ag imirt peile (boy playing football),”  and on hearing the phrase, the local women began calling the boy “Pelé.”

Magee himself labelled the tall tale ‘a cock-and bull story’ but a plausible one, and Pelé agreed that it was indeed possible.

According to Magee, the theory appeared in a subsequent book by Pelé, and the account is referred to in many articles on the origin of the player’s famous nickname.

The more generally accepted version, however, was repeated in the 2006 autobiography ‘Pelé.

Originally called ‘Dico’ by his family, the story started with a fellow team member of Edson’s father João Ramos do Nascimento at the Vasco de São Lourenço football club in Minas Gerais. The goalkeeper was known as “Bilé” and as a boy, Edson (named after Thomas Edison) would watch the team training, sometimes standing in goal pretending to defend a shot.

It was the youngster’s mispronunciation of the word ” Bilé” to something resembling “Pilé that saw the name stick.  When the family subsequently moved to Bauru, a class-mate began to tease the young Edson with the nickname becoming “Pelé”

In later years, the  icon told a German newspaper that he hated the label so much, he punched the classmate who came up with it, earning a two-day suspension from school.

“Over the years I’ve learnt to live with two persons in my heart,” he said. “One is Edson, who has fun with his friends and family; the other is the football player Pelé. I didn’t want the name. Pelé sounds like baby-talk in Portuguese.”

It later emerged that the word means ‘miracle’ in the Hebrew language, a description that seems apt for the Brazilian boy who embarked on an extraordinary rise to global stardom.

Also known as Perola Negra (the Black Pearl), Pelé  joined Santos FC as a 15-year-old and was promoted to the senior side after just one year, scoring on his début against Corinthians. Ten months after signing professionally, the teenager was called up to the Brazilian national team. Catapulted onto the world stage, he went on to become the player regarded by many as the greatest of all time, and the name Pelé became synonymous with the beautiful game itself.