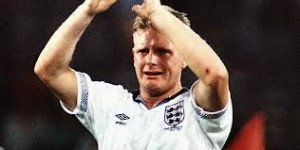 For me, the 1990 World Cup, was the last “innocent” World Cup and therefore utterly appropriate that it was there and then that Paul Gascoigne burst onto the world stage.

Personally, it was the first and last World Cup of innocence. I was eight during Italia ’90 and therefore too young to properly remember Mexico ’86. Italia ’90 was of course also the Republic of Ireland’s first ever appearance at a global finals of the world’s only truly global game and of course it was an extremely special time for the Emerald Isle as a whole, but of course more so for youngsters of my age as I, along with so many of my friends fell in love with the game.

By the time World Cup USA 1994 came along, top flight professional football had well and truly lost its innocence. In 1992, the behemoth that is Sky Sports effectively “took over” the top flight of English football as the top flight of English football became rebranded as the Premier League and mega millions were pumped into advertising the game and making it ‘sexier’ for the kids. This of course meant that commercialisation went through the roof as people had to subscribe to £60/€70 per month for subscriptions to the “Greatest League on Earth” and all sorts of variations came on kits.

When previously clubs (and soon national teams) only had a change of kit when there was a colour clash with the opposition, by the early 1990s, all sorts of flashy (and frequently freaky) kit designs came into being, with some sides introducing a new kit a couple of times a season and many sides even introducing a third kit!

The 1994 World Cup was the first World Cup that featured players’ names on the back of their shirt. This was of course a further part of the marketing business that football had become as youngster’s wanted to have their heroes’ name on the back of their shirt. The fact that the 1994 World Cup took place in the United States, was for me, part of football losing its innocence and maybe even losing part of its soul just a little. USA ’94 was the first time that a World Cup had taken place outside of a major footballing stronghold (i.e. Europe or South America).

For me, the World Cup should be held in nations which are traditional strongholds of (or at least nations that are passionate about) the game. When a World Cup takes place in a nation such as Italy/Spain/England/Germany/Argentina or of course Brazil (among a number of other nations), the whole nation is aware of exactly what’s going on and gets swept away with enthusiasm for the event. When the World Cup was played in the USA in 1994 however, there were many people on the streets who had no idea of what was going on or that the World Cup was even taking place there! Of course, FIFA wanted to expand its territories and marketing base, which was a big (if not the main) reason for the tournament going to the United States in 1994.

Of course similar decisions have been made with the award of the global finals of the global game going to South Africa (traditionally a rugby country) in 2010 and the bizarre decision to award the tournament to Qatar in 2022. Of course the latter decision is one which leaves something of a sour taste in the mouth and it is very clear that that decision is one where big business is the big interest and innocence or thoughts of the “love of the game” are left behind as not even an afterthought in terms of awarding the World Cup to the tiny oil-rich gulf state.

Anyway, back to Gascoigne. It was entirely fitting that the 1990 World Cup – the last World Cup of innocence – was where he burst onto the world stage and became an icon for millions. He was 23 during that tournament but he was of course a man child. Always the centre of the action when England played at that World Cup, he would take charge, dribbling past defenders as if he were in a schoolyard, was for me, the highlight of that tournament. Instrumental throughout the tournament, Gascoigne provided the assist for Mark Wright’s header which saw England beat Egypt and top their first round group and the Newcastle native also provided the assist which allowed David Platt score the only goal of the first knock out game against Belgium.

Just like a kid, Gascoigne always wanted to be involved in the play no matter where on the pitch the ball was – and despite the fact that he was far from the best of tacklers. It was his impetuous foul on Omam Biyik which conceded a penalty to Cameroon in the quarter finals that almost knocked England out, though “Gazza” was inspirational in helping get England back into the game as he provided the assist for Gary Lineker’s penalty which the latter scored as England eventually went through to the semi-finals 3-2 after extra-time.

That semi-final against West Germany was for me, one of the most entertaining games of football I have ever seen. Maybe I’m remembering it with childhood tinged eyes, but for me, that game had it all. End-to-end action, both sides hitting the post, a fluke goal for the Germans with Lineker equalizing at the end of normal time with a quality finish and constant goal mouth action as well as good saves from both keepers and of course a dramatic penalty shoot-out when extra-time failed to separate the old enemies.

There was also of course Paul Gascoigne. For me he was the man of the match that night as well as being the star of that tournament, full of boundless energy and throwing his body in everywhere. With the game in extra-time and all square, Gascoigne, having already received a yellow card during England’s victory over Belgium in the second round, was booked for a foul on Thomas Berthold which meant that he would be suspended for the final if England won the match. Close-up television camera images showed that Gascoigne had tears in his eyes following the yellow card. The incident endeared Gascoigne to a nation. England of course lost the resulting penalty shoot-out but Gascoigne was named in the All-Star Team of the Tournament for his inspirational all energy performances.

Upon arriving back in England after the defeat to the Germans (and a third-place play-off), more than three million people lined the streets to welcome Bobby Robson’s side home and “Gazzamania” was born with many thousands sporting false eyes which spouted out water/’tears’. Gazza himself came back to his homeland wearing false breasts and false beer belly – a clear and cheeky message to those who had said he was over weight before the tournament. Speaking shortly after the tournament, fellow England midfielder Chris Waddle said:

As a result of that 1990 World Cup, a star and a media darling was born. Gascoigne would enjoy varying highs and lows during the remainder of his playing career which effectively ended when, having been dogged by injury, he retired from professional football aged 35. For me, nothing will surpass the 1990 World Cup when one talks about the brilliance of Paul John Gascoigne though. The spirit and joie de vivre he exulted throughout the tournament – both off – but especially on the pitch, were truly a joy to behold.

Like many footballers, Gascoigne has struggled desperately following retirement from playing the game he loves. Gone are the bright lights and the adulation of tens of thousands every week. Still battling severe alcoholism, bi-polar disorder, near bankruptcy and a number of failed relationships, Gascoigne narrowly avoided a custodial sentence (likely to be six months imprisonment) this week when he pleaded guilty to a charge of assault and being drunk and disorderly on a train in Stevenage last month. He was instead fined£1,245 – a fine which was means tested for the close to broke Gascoigne. It is likely that the Paul Gascoigne story will have a sad, publicity laden ending. It is how he burst into the public eye for which he should be remembered though.

One thought on “Paul Gascoigne: remembering a more innocent time”