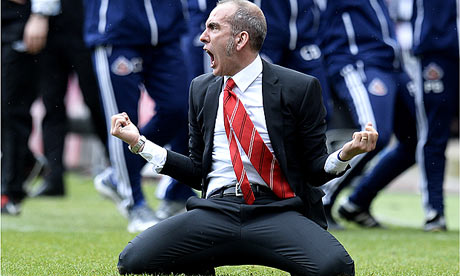 It’s not quite the end of September but already the Premier League has its first managerial casualty of the season. After five games without a win, and rooted to the bottom of the table with a single point, Sunderland AFC have shown the door to Paolo Di Canio. The Italian leaves the Black Cats after only 13 games in charge. Although his reign was brief, it’s fair to say that there were enough dramas during his reign to encompass a decade at the helm. But are we really surprised he’s gone so soon? Here is a look at Di Canio’s brief yet extra-ordinary reign at the Stadium of Light.

Di Canio’s initial appointment sparked fury amongst sections of the Sunderland support as a result of the Italian’s politics. David Milliband resigned from his post as Vice-Chairman while the Durham Minor’s Association opted to withdraw their banner from the Stadium of Light in protest of Di Canio’s fascist sympathies. The whole debate of Di Canio’s political agenda seemed to mask the fact that Sunderland’s Premier League status was dangerously under threat, with the club only one point off safety with seven games to go. It was as if Paolo Di Canio was spending more time attempting to justify himself to the media rather than articulating how he was going to address the problem of Premier League survival. There were dangers from the off set of whether his leadership at Sunderland was going to be about the club or ‘The Di Canio Show.’

However, despite the turbulent start to his Sunderland career, the Roman’s finest hour came two weeks into his appointment as he orchestrated his side to a 3-0 away win against their old enemy, Newcastle United. The iconic image of the suited Italian on his knees saluting the Sunderland faithful began to breathe optimism amongst the Mackems, but that optimism was short lived.

After a 6-1 demolition by fellow relegation candidates, Aston Villa, the cracks in Di Canio’s regime began to emerge, not even a full month into his appointment. Much of his antics began to mirror those of his time at Swindon Town; personal disputes with several players, public outbursts of criticisms and a hands-on-approach to management that was described by players from both outfits as being like a totalitarian regime. It all became too much for Sunderland’s stars when Di Canio introduced policies which controlled aspects of their life away from the club and training ground.

In the run up to Sunderland’s final game of the 2012/13 season, seven players were fined by Di Canio, who had also announced that their holidays would be severely restricted if they did not demonstrate ‘dignity’ on the pitch. After the 1-0 loss to Tottenham marked the end of Sunderland’s Premier League campaign, Di Canio sought about addressing what he saw as dead wood at Sunderland by bringing in no more than 13 new summer signings.

But despite a fresh group of players hand-picked by the Italian, the turbulence from last season continued at Sunderland and the same themes of Di Canio’s personal vendettas against players, soon manifested itself into problems and disputes with the board – similar to that of his time at Swindon only 9 months ago. After a 3-0 defeat against West Bromwich Albion, Di Canio was shown the door.

So are we surprised he’s gone so soon? A manager getting sacked 5 games into a Premier League season would, in most cases, be extra-ordinary but I am personally not surprised that Di Canio has gone so soon.

His initial appointment by Ellis Shaw was designed to provoke a reaction and the eccentric Italian did what was originally required of him. He galvanised a Sunderland team that was beginning to become stale under Martin O’Neill and kept their Premier League status intact – although the feat was made slightly easier by Wigan Athletic’s FA Cup distractions.

However, ultimately, it is obvious that Di Canio’s regime – or ‘dictatorship’ if you prefer – at the Stadium of Light is not working currently. The jump from League One to the Premiership was always going to be a gigantic step and it is one that was perhaps too big for the Roman. His self-confessed methods of never changing his regime could perhaps work in League Two, but the Premier League requires more adaptability.

Don’t get me wrong, we as football fans love nothing more than a manager with character, charisma and more importantly, a love for the club’s supporters. But it is clear that Di Canio is too stubborn to learn from his mistakes, which vividly mirror those of his turbulent time at Swindon. Even with a new group of players – which granted do need time to gel – it is clear that Di Canio’s eccentric personality and methods is doing little to improve things at the Stadium of Light.  The time was right to say Ciao to Paolo.