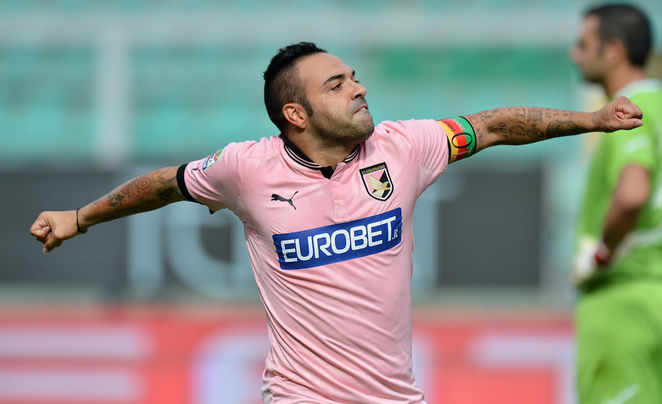 Before last season it looked like Palermo had finally achieved some kind of stability. For the five years before that they had always been hovering around the top half and European places.

Last season though provided a warning, in much the same way an earthquake does before a tsunami, that the tides were changing. A 16th place finish has been followed up by the one of the worst seasons in the Rosanero’s recent history. In fact it is not since the late 80s and 90s that the club famous for the colour of their kit has suffered such hardship when they yo-yoed between Serie B and Serie C. Now though history is in danger of repeating itself as Palermo sit bottom of the table, five points adrift of safety with just nine games to play.

There have been some shock relegations across Europe over recent years but normally when a team is rooted to the bottom of the table with just three wins all year it suggests the playing personnel are not up to scratch. The sad truth for Palermo fans is that this squad is way below the standard regulars at the Stadio Renzo Barbera have become used to over the last few years. During this time Palermo have lost some truly world class talent and whilst a few stand outs have come in and performed the squad is not what it once was. It was the summer of 2011 that probably hit Palermo the hardest in terms of star material leaving. The previous summer Edinson Cavani had left to join Napoli on loan with a view to a permanent move which he completed in 2011 whilst Simon Kjaer had moved to German champions Wolfsburg. With those two gone the season ahead could have been tricky but promising youngsters Ezequiel Muñoz, Josip Ilicic and Armin Bacinovic all joined the club and marshalled by the excellent Javier Pastore the club exceeded all expectations to finish 5th in the league and claim a place in the following season’s Europa League.

It is unfortunate that the summer Palermo really started to come to attention to the rest of Europe was the summer that the Qataris bought PSG and started their spending spree. Salvatore Sirigu and Javier Pastore both joined the French side for small and big transfer fees respectively. Unfortunately Pastore’s agent had a clause in his client’s contract that meant he received around a third of the transfer fee meaning Palermo didn’t benefit financially as much as they might have done. Talented youngster Pajtim Kasami left to join Premier League side Fulham and Mattia Cassani joined Fiorentina on loan (he would join them on a full transfer the following summer) but the departures did not end there and there was worse news on the horizon. With literally hours before the transfer window closed key midfielder Antonio Nocerino was sold to AC Milan for just €500,000 in what was one of the more bewildering transfers. As such an important part of the Palermo midfield it boggles the mind that he was allowed to leave for such a small fee. Despite the arrivals of talented centre back Matías Silvestre and midfielder Edgar Barreto Palermo struggled and finished 16th in the league. The following summer as Cassani left permanently his opposite full back Federico Balzaretti moved to the capital to join Roma and suddenly virtually of all the talented 2010/11 side was gone.

When so many quality players leave a club and so few come in you must think that the manager has got his priorities completely wrong? Well that would be a fair assessment if it had been only one or two manager during this time period. The truth is that since Delio Rossi was sacked in February 2011 following a two year spell (a Palermo best by some way in recent years) Palermo have had ten different managers including Rossi himself again. Ten in a little over two years is absurd, appalling and a shameful example of owners abusing their power and this is perhaps the missing piece in the puzzle, owner Maurizio Zamparini Italy’s answer to Venky’s. Since buying the club in 2002 it is true that Palermo have become re-established in Serie A but the instability at the club is truly terrifying. Since he took control he has changed manager over 25 times and this season he really has been in a class of his own. This season the merry go round that is Palermo has seen five managers but it goes deeper than that. Gian Piero Gasperini was hired by the club in September but then fired in February. His replacement, Alberto Malesani lasted just 19 days at the club before he too was sacked and Gasperini reinstated. He didn’t fare much better and after just fifteen days he was sacked for the second time in six weeks and Giuseppe Sannino, the man sacked at the start of the season after just three games, took charge once again. What this means is that the Sicilian side have made four managerial changes but only had three different managers.

To put it into perspective the Sicilian side have only won three matches in the league all season. Zamparini really has lost it this time and he is in danger of destroying the club he invested so much in. There is no stability at the club and whilst it is his club and he is entitled to do what he wishes he has to stand up and take responsibility for the club’s current plight. This however is unlikely, Zamparini is a famous eccentric. Some of his well-known outbursts have included calling Adrian Mutu a “crafty, little gypsy”, branding the English “pirates”, and threatening to castrate his side and “eat their testicles in my salad”. The owner is turning 72 in the summer and perhaps now is the time to take a back seat at the club. Perhaps leave the day to day running of the club to someone else and become less involved in the affairs of the club. This is an improbable scenario and as things stand Palermo are a club in real danger. For the sake of the fans and players some normality needs to be injected and injected fast if Palermo are to avoid plummeting through the lower divisions.