A 5-1 defeat at Tallaght Stadium may be the final act of Owen Heary’s inglorious spell as manager of Sligo Rovers, as the Bit o’ Red board seem destined to part company with the Dubliner a mere three months into his reported two-year contract.

When Heary took over at Sligo at the beginning of season, the move was generally seen as a step up for the former Shelbourne captain, who had performed reasonably without excelling in his first managerial position at Bohemians. 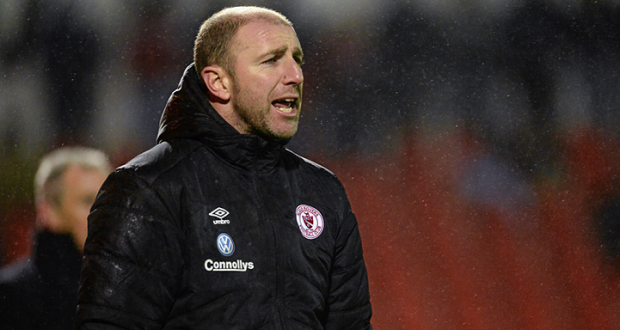 While the move move from a part-time role in Phibsborough to an effectively full-time operation at Sligo was undoubtedly a step forward personally, his declaration he was progressing to “bigger and better things” was treated as an insult by fans who’d never fully taken to him as a player or a manager.

Hubris is rarely seen as a good quality in a coach, and immeasurably less so in a coach whose CV hasn’t yet warranted such aspiration, and the diametrically-opposed trajectories of his current and former teams have underlined the maxim that pride tends to precede a fall.

Unlike his predecessor, John Coleman, he was given personal and financial backing to put together a squad that could once again challenge for European football and many – myself included – expected his squad to be in contention for same.

The pulverisation at the hands of Shamrock Rovers, and Heary’s former mentor Pat Fenlon, wasn’t the lowest point in his Sligo tenure – that honour goes to the 3-1 home reverse to then-pointless and managerless Bray – but it was one humiliation too far for a well-supported club who have become accustomed to success.

It’s ironic that the defeat in Tallaght came on the back of a performance that briefly upset a worrying trend that developed when Sligo travelled to the league’s leading sides.

Against Dundalk and St Patrick’s Athletic, the westerners had competed manfully until conceding the first goal, at which point Heary’s side lost all shape and confidence before succumbing to comprehensive defeats.

In Tallaght, Sligo started strongly and reacted well to the concession of two goals against the run of play, and deservedly halved the deficit on the hour mark when Dinny Corcoran capitalised on their opponents’ defensive fragility.

Three goals conceded in the final 20 minutes – including two in three minutes – confirmed a predictable pattern, however, and undid many of the gains made during a three-game unbeaten streak that temporarily eased the pressure upon Heary.

It’s manifest that Sligo’s perilous position – one point above the relegation play-off spot as the season approaches the halfway mark – is unacceptable for a club of Sligo’s stature and the quality of their squad.

That they sit just above Bray Wanderers – managed by the man who turned down the Sligo job before Heary’s appointment – is doubly damning, and were one to predict the course of the coming rounds, which see Sligo travel to Cork and a revitalised Bray, it would be hard to bet against those positions changing.

The challenge for Sligo will be whether they can afford to cut their losses and acknowledge that the appointment of Heary was a mistake, and appoint Gavin Dykes as the only realistic interim choice, or hope that the project somehow comes good.

The Sligo board – which is well-represented by the fans – have shown themselves ruthless in recent times as they disposed of title-winning manager Ian Baraclough and Coleman in short measure, but now many not be the time to begin another rebuilding measure.

For Heary, the outlook appears bleak. His bridges burned at Bohemians, where Keith Long has the proud Dublin club exceeding all expectation, an upturn on the Garavogue appears his only realistic chance of redeeming his managerial career in the short term.

Reports indicate the Sligo board will make a decision on their coach’s future in the coming days. The outcome will have repercussions far beyond the Heary household.