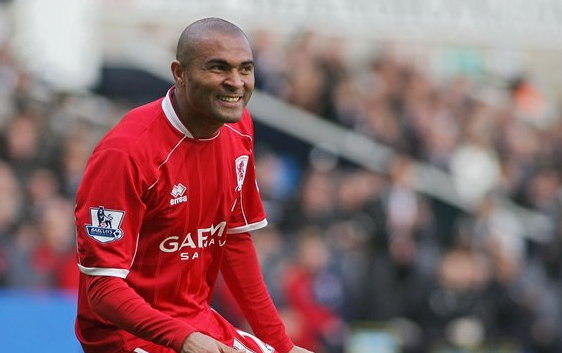 Middlesbrough doesn’t strike you as the kind of place you’d expect to find too many Brazilian players. In fact, you’d expect Teeside to be one of the last places they’d turn up voluntarily, yet ask any Boro supporter about Brazilian footballers and they’ll go all misty eyed and begin waxing lyrical. That, or be overcome with rage.

You see, on one hand, we have Juninho. One transfer deal was all it took for Bryan Robson to get people to start taking Middlesbrough FC seriously. He spent £4.75m on the newly capped Brazil international Juninho Paulista who, in just two seasons, captured the hearts of the north-east club’s supporters. Juninho, in tandem with his compatriot Emerson, orchestrated some of the most entertaining football in Boro’s history and, when the team were relegated after his second season, he left for Atletico Madrid with the supporters blessing. Two further spells at the club cemented his place in local history, and his apparent love of the town itself endeared him to supporters no end.

On the other hand, we have Afonso Alves. When he joined Middlesbrough 11 years after Juninho he cost around four times as much, but his time at the club would follow a much different trajectory to his predecessor.

Alves wasn’t a notably talented youngster by Brazilian standards. Born in Belo Horizonte, he first turned out for his local side, Atlético Minero. He made a handful of appearances in 2000 and 2001 for a team that also included Gilberto Silva and Rodrigo, the David Beckham lookalike who briefly played for Everton, but couldn’t hold down a starting spot. In 2002, at the age of 21, he decided to chance his arm in Europe.

Opting against warmer climes, he signed for Gothenburg side Örgryte Idrottsällskap. 2002 was a successful season for player and club, Örgryte finishing third in the league behind traditional powerhouses Djurgarden and Malmo, and ahead of Helsingborgs. Playing up front alongside Johan Elmander’s brother Patrik, he struck 13 goals in 18 games, followed by 10 goals in 21 games the following season. That was enough to convince Malmo of his quality, and he won the Swedish title in his first season with The Blues, scoring a goal every other game. He improved his ratio slightly the season thereafter, but Malmo could only finish fifth.

It was clear that Afonso Alves, now 25, was too good for the Swedish league, but you won’t find clubs in major leagues queuing up to take players from the Allsvenskan, especially of that age. Even Zlatan had to reach the top via Ajax, so it was no surprise that Alves moved on to a mid-tier league, more specifically to Heerenveen in the Dutch Eredivisie. The club broke their transfer record to bring in Alves, implying that they had high expectations of the player, but what was to come over the next 18 months was entirely unexpected.

Immediately upon his arrival he started scoring for fun. One on his debut, a 90th minute winner against ADO Den Haag, then two more next time out in a 5-0 drubbing of Willem II. Alves had hit three in August, and he added another against NEC in September. Three goalless games hinted at a dip in form, but back to back hat tricks against Groningen and Vitesse in late October rocketed him to the top of the goal scoring charts, where he would stay. Alves only failed to score six further times all season, and finished with five hat tricks (including one four goal haul) for a total of 34 goals in 31 games. That tally is one shy of Kezman and Suarez’s recent 35 goal hauls, but better than anyone else since 1979. More impressively, the only other Brazilians to top the scoring charts in Holland were the legendary Romario and Ronaldo.

Such a record in the Eredivisie attracts the kind of attention that a decent record in the Swedish league doesn’t. That summer, he was looked at by AZ Alkmaar, who’d missed out on the Dutch title by losing on the last day of the season, and pre-Sheikh Mansour Manchester City. More credibly, Alves had been watched by Roma and even Real Madrid, but all eventually turned up their noses, unconvinced by his quality. Boro were also supposedly interested at this early stage, with a fee of £6m rumoured, although nothing concrete emerged.

Alves didn’t immediately pick up where he left off in 2007/08. He was initially injured for the first few weeks of the season, although it was also rumoured that he’d been missing training, not putting in the required effort when he showed up and instead spent the time lording it over the rest of the squad, his 8 caps for Brazil having gone to his head. When he did finally get onto the pitch, however, his season began with a bang.

Seven bangs, to be precise. In just his second appearance of the season he struck seven times in a 9-0 victory over Heracles Almeo, an Eredivisie record. His performance was so good that his manager decided to take him off after 89 minutes so that he could receive a standing ovation, despite not having anyone else to bring on in his place having already used all three substitutes. Four more goals in six injury punctuated appearances come January seemed to confirm that Alves was no flash in the pan.

Back to Boro. In the summer transfer window of 2007 they lost Mark Viduka and Yakubu to Newcastle and Everton respectively, and were in dire need of someone useful to partner the hard-working but unspectacular Sanli Tuncay up front. Mido, who arrived in the summer from Spurs, started well but faded by January. Alves’ 7 goal haul had pushed his price tag up to £12m, but that didn’t deter Boro manager Gareth Southgate. Things weren’t straightforward, with work permit issues and agent fees holding up the transfer until the last hour of the last day of the transfer window, but the hastily arranged meetings and numerous faxes paid off, and Southgate eventually got his man for a club record fee.

He probably wishes he hadn’t bothered.

Dutch top scorers have a mixed history in the Premiership. There have been two undoubted successes, Ruud van Nistelrooy and Dennis Bergkamp. Dirk Kuyt and Pierre van Hooijdonk fall somewhere in the middle, whilst Mateja Kezman flopped horribly at Chelsea. Whilst not quite as poor as Kezman, Afonso Alves fit comfortably into the third category throughout his two years at the Riverside.

Having been prolific in Holland, Alves had to wait until 6th April to open his account for Middlesbrough, scoring twice in an FA Cup draw against Manchester United. He didn’t break his league duck until 26th April, scoring in a defeat to Sunderland, but some pride was salvaged thanks to a hat-trick on the last day of the season in a meaningless 8-1 victory over Manchester City. This was not what Boro broke their transfer record for.

At the start of the 2008/09 season Alves showed signs of life, scoring in a 2-1 win over Stoke City and twice more in October against Blackburn and Manchester City. Unfortunately, that would be his lot until January as Boro flirted with relegation.  He found the net a further four times after the New Year, although three of those strikes were in the FA Cup and two were against non-League Barrow. His last goal for Boro was at Molineux on the 24th January, and the Teesiders ended the season relegated, with Gareth Southgate walking the plank shortly into the following season.

Needing his wages off their books, Boro were all ears when Qatari side Al-Sadd offered £7m. After just a handful of goals in 18 months the club did very, very well to recoup that much for a 28 year old forward who had been a huge disappointment.

Southgate can rightfully feel unfortunate. When he paid £12m for Alves he thought he was getting a goal scoring machine who would convert the plethora of chances being created by a young Stuart Downing. Instead he got an injury prone and ponderous centre forward who didn’t seem to know what a goal was, let alone where it was located. Had he recaptured his form, Alves could have been the man to keep Middlesbrough fighting for regular UEFA Cup football.

Whilst Southgate carves out a career for himself as a TV pundit, having not managed since his spell at Boro, Alves earns his pension playing in the Qatari league. He’s too good for that division, and is once again scoring for fun (30 goals in 48 games since moving to the Middle East). These literal seasons in the sun are a far cry from his metaphorical one; it’s not every year that someone hits 34 goals in the Eredivisie (Luis Suarez was the last to reach that mark) but it’s also not the first time someone who reached that mark has been found out in the Premiership.