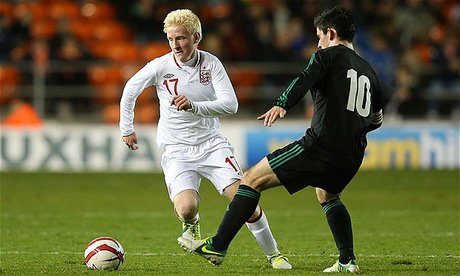 £5million? £10million? £12million? How much would be enough to convince Derby County fans that selling Will Hughes represents good business?

The 17-year-old is beginning to build quite the reputation courtesy of some well-made highlight packages, fervent discussion on internet forums and constant rumours in the national back pages  but, most of all, 29 increasingly accomplished and mature performances in the second tier of English football plus two well-taken goals.

As with all talented English youngsters a good amount of hyperbole and fervent speculation has gone into the creation of the Will Hughes: Future Superstar brand. Certainly the current round of speculation linking the midfielder to a move to either side of Manchester can’t have been helped by one journalist’s recent musing that Hughes could well provide Sir Alex Ferguson with a long-term alternative to veteran Paul Scholes.

Like Wilfred Zaha and Tom Ince before him, Hughes’ stock, reputation and (doubtless of most importance to many other than Hughes himself) valuation will only shoot through the roof as long as the British press and public continue in their desperate search to find England’s answer to Leo Messi, Cesc Fabregas or Cristiano Ronaldo.

Any other youngster would start to believe the hype currently surrounding Hughes (I’m looking at you, Giles Barnes) but Nigel Clough appears to have struck gold in that the central midfielder currently receiving national acclaim for his performances has his feet planted, nailed and firmly bolted to the ground.

The very few interviews Hughes has given to the media portray an everyday lad who knows the task that lies ahead of him: convincing the world that Will Hughes is the real deal. When press conferences inevitably turn to the latest round of speculation surrounding the England Under-21 midfielder, Nigel Clough is quick to mention his star player’s level-headedness and a maturity that belies his 17 years of age.

But what is it about Will Hughes that makes him stand out on a football pitch? For me it’s his composure and strength on the ball. The biggest challenge for any youngster in the Championship is dealing with the infamous “physical game” but Hughes rises to that challenge with aplomb. When Tom Carroll joined Derby on loan last season it was clear that he was a talented midfielder but he was brushed off the ball by the opposition far too easily, as was fellow Spurs midfielder Jake Livermore.

But Hughes doesn’t have that same problem. He may not be built like Tom Huddlestone was when he burst onto the scene in 2005 but Hughes gives as good as he gets in a physical battle. More often than not opponents set their midfield out to neutralise Hughes’ effectiveness on the ball (which I’ll come to next) but Hughes has more than held his own against the rough challenges that come from the likes of Jonathan Woodgate, David Norris, Hayden Mullins and Nicky Bailey. For a slimly-built teenager, Hughes is very rarely muscled off the ball and it’s even rarer to see anyone win it from him, cleanly or otherwise.

Hughes models his style of play on Spanish midfielders like Xavi and Andres Iniesta and you can see the Spanish influence in his play. Just like his idols Hughes’ game relies on finding pockets of space to receive the ball before moving it on to the best attacking option. Whether that means sending an inch-perfect through ball to the target man or playing a short ball out wide to the wing-back is irrelevant: Hughes is capable of playing that ball and finding that pass just as his Spanish idols are.

In a team intent on playing the ball on the ground as often as possible, Hughes excels. His awareness of the players around him ensures that he’s always in the best position to accept the ball and play it along quickly but Hughes is equally happy running forward with the ball at his feet. Not many Derby fans will forget the Messi-esque run that almost resulted in the Championship’s goal of the season in the victory over Leeds or the tricky feet in the box that led to Derby’s third goal against Middlesbrough. Hughes can unlock defences with a mazy run or a perfect pass and you know, if he gets the ball in an advance position, Hughes is your best chance of getting a goal.

Like Messrs Zaha and Ince then, Hughes is also capable of those individual moments of magic that so excite the British media and add diesel to the flames of speculation surrounding the country’s promising young talent. But unlike those two Hughes doesn’t rely on fancy tricks and the occasional 30-yard screamer, nor does he have the tendency to drift in and out of games depending on how his teammates are playing. If Derby have the ball in the opposition’s half you can be sure that the midfielders and attackers will be looking immediately for a tuft of shocking-white hair drifting seamlessly into the nearest available space, leaving two or three markers in the dust.

Defensively Hughes is also sound. Not only does his strength prevent much more experienced players from taking the ball off him cleanly but the lad doesn’t shy away from putting a foot in to retrieve the ball when necessary. If he’s sent sprawling to the floor by a midfielder determined to make an impact on his mark, Hughes will get up, dust himself off and race to win the ball back. At times, Hughes is a little impetuous when going for the ball and he has picked up a fair few bookings this season for rash challenges but, in all honesty, criticising a 17-year-old for rash challenges is like criticising grass for being green.

Hughes’s confidence on the ball makes him an ideal central midfielder and he is equally comfortable playing a holding role ahead of the back four or behind the striker as the proverbial trequartista. He isn’t exactly prolific in front of goal and there have been occasions when Hughes has had an opportunity to score and hit a wild shot over the bar or smacked it straight at the goalkeeper. With that said, anyone who watches Hughes’ recent goal against Millwall will tell you that he is more than capable of scoring the goals that have seen Tom Ince linked with a £6million move to Liverpool.

And Liverpool could well be the next step for Hughes, a dedicated Reds fan. The system that Brendan Rodgers has employed at Anfield would be tailor-made for Hughes to work in, though the lad would have a job displacing the likes of Steven Gerrard, Lucas Leiva and Jonjo Shelvey. But is Hughes capable of doing so within the next five years? Absolutely. Just as he could be a staple of the Tottenham, United, City or Arsenal midfields by the time he’s 23, and that’s before we get onto the subject of England.

This piece isn’t trying to be another piece of hyperbole dribbling over Hughes’ uncanny ability to control a football like no player seen at Pride Park since the days of Stefano Eranio, I assure you. Hughes himself would admit (and has admitted such) that he is far from the finished article at just 17. But that is what makes watching Hughes so exciting. He may not turn a defender inside-out twice a game or lob the keeper from the half-way line but he does bring something different to the table, something the English game has missed for a long while. And he has the attitude that very few professional footballers have; one that doesn’t allow for distractions like £10million price tags and links to Barcelona.

Bringing a ton of flair and an understanding of the game at an extraordinarily young age, Hughes is arguably the most foreign player currently in the England Under-21 squad, such is his mentality, movement and passing ability. Given a few more years of development with the right coaching squad (which Derby fans will be desperately hoping is Nigel Clough and his team, though we should all perhaps prepare ourselves for the inevitable on that front) Hughes could turn into the quality player England have been missing for generations.