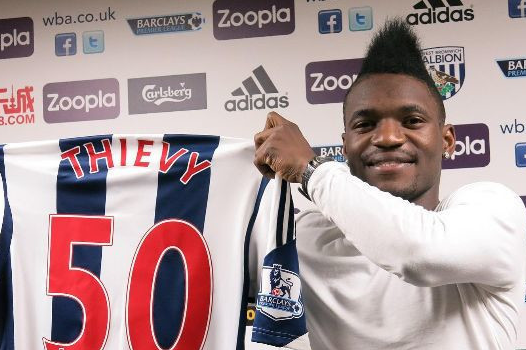 West Bromwich Albion currently staring relegation directly in the face, it was with an air of desperation that they rushed in Espanyol attacker Thievy Bifouma on a season long loan. It was a signing that had no Albion fans particularly excited- a relatively unknown youngster with a relatively average goal record in Spain.

50 seconds into his debut at Selhurt Park Thievy had left one defender for dead, and swept home his first goal for the club in sumptuous style. So who is this young forward, and what can he bring to Albion’s side?

Spotted playing for Strasbourg as an 18-year-old in his native France’s third division, Thievy was signed by Barcelona based club Espanyol (then managed by Mauriccio Pochettino) in 2010, and within weeks he had made his debut in team, impressing with a series of pacy displays. He firmly established himself as one of the hottest prospects in Spanish football at the start of the 2011-12 season when a 19-year-old Thievy scored a hat-trick against Barcelona in the Catalan Cup Final.

Thievy’s pace and ball skill was there for all to see, however, it quickly became clear that while he  showed the occasional moment of brilliant technique he was inconsistent and there were question marks over whether or not he had the discipline to improve. He was subsequently loaned out to Spanish Second Division Side Las Palmas, where he scored an impressive 11 goals in 38 games (mostly playing from the wing), enough to convince Espanyol to sign him to a long term contract until 2017.

However, limited first team football this season had led Thievy to take matters into his own hands, with the French youngster missing multiple training sessions in order to force a January move, and this is where Albion came in, signing Thievy on an initial 400k loan, with an option to buy for around £2million in the summer.

So what have Albion signed? Clearly, a man with fantastic hair, and clearly a man with some disciplinary issues, but should be get sufficient game time under Pepe Mel, a man with the potential to develop into a top player.

The first thing to say about Thievy’s game is that it is all about pace. Thievy is one of the quickest footballers along the ground anywhere in the world, and he will inject a much needed lease of life into an otherwise relatively lethargic West Brom attack. Furthermore, Thievy has a real instinct for goal, and is technically a very gifted player, possessing a wicked left foot.

Employable either through the middle or on the wing, what Thievy lacks in height and physical presence, he makes up for in work ethic and nuisance value. Furthermore, Thievy should fit right into the style of play that Spanish coach Pepe Mel wants to employ at Albion. With his natural pace and awareness, Bifouma will be well served playing in a system where the team tries to get the ball on the floor and forward as quickly as possible, and will be able to hurt even the Premier League’s best defences on the counter attack.

Of course, it is idiotic to base your judgement on a player on one game- however, the 45 minutes that Thievy played against Crystal Palace was more than encouraging. The young Frenchman seemed to lift the team significantly when he came on, and had it not been for an unfortunate penalty decision with Albion pushing for an equaliser, Bifouma’s introduction could well have catalysed an inspired second half comeback.

Seemingly, much to be excited about then.

It appears that Albion have got themselves another potential bargain. Whilst the name Thievy Bifouma may not have led many people to jump off their seats in excitement, back Bifouma to become a real force to be reckoned with at the end of the season.

Not convinced? Well, perhaps this short montage of Thievy’s best moments from the past year and a half on the football pitch will.