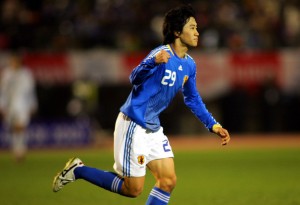 While tuning in to the latest Football Weekly podcast (yes, I cheated on Hold the BackPage!), I listened with great interest as Raphael Honigstein spoke enthusiastically about Borussia Dortmund’s Japanese international Shinji Kagawa.

Signed from Cerezo Osaka for just €350,000, the 21 year old hasn’t taken long to adapt to his new surroundings and bagged a stunning brace in Dortmund’s 3-1 win over 04 Schalke at the weekend.

“Shinji’s just done something incredible in the biggest derby in Germany,” said Dortmund boss JürgenKlopp after the game.

“He had a phenomenal game. If there’s anyone in Japan who hasn’t seen the match yet, they should. He hasn’t been with us for very long, but already his teammates are confident in giving him the ball.

“People in Dortmund will never forget him now.”

His goalscoring record in Japan was impressive, with 55 goals in just 125 games from midfield, though most of those were played in the J-League’s second tier.

Kagawa’s summer move to Dortmund almost went unnoticed, and why wouldn’t it considering the fee involved coupled with the fact he was omitted from Japan’s squad for the World Cup in South Africa. 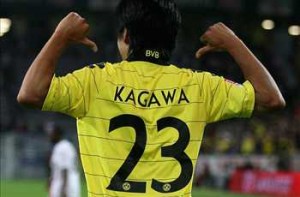 However his blistering start to the campaign, which included another double against Qarabağ Ağdam in the Europa League qualifiers, has him making headlines in Germany.

At just 5ft 8ins tall, he possesses a low centre of gravity that compliments his excellent dribbling skills, making him a difficult prospect for any defence.

“People laughed in the summer when I said this guy will score goals for us,” said Dortmund’s Sporting Director Michael Zorc.

Kagawa is also finding his feet at international level following his World Cup disappointment, and bagged the winner against Paraguay at the beginning of the month.

Despite a whirlwind few months, Kagawa is not getting too far ahead of himself.

“There are a lot of good, young players on this team so I have to keep fighting for my place on the team,” he said.

Japan have lacked a real creative talent since the retirement of Hidetoshi Nakata, but they may have just have found a more than suitable replacement.

Don’t believe us? Check out Kagawa for yourself!

One thought on “One 2 Watch: Shinji Kagawa”