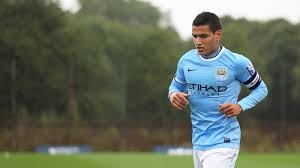 Manchester City are known in recent times for their enormous spending power, not shying away from buying the most expensive and lucrative players in the game. But behind the scenes they have invested a lot of time and money into their youth infrastructure.

Now more than ever though they are starting to reap the rewards with an abundance of young players starting to contest for first team places; one in particular though stands out. Marcos Lopes. The little playmaker is impressive, very impressive.

Although claiming Portuguese nationality Lopes was born in Belém, Brazil on the 28th December 1995 and at age four moved to Portugal. He started his footballing career at Liga Portuguesa side Benfica; at age 15 catching the eye of Manchester City, who in 2011 agreed a £790,000 fee for him. Lopes to start with played for City’s ‘Elite Development Squad’ (EDS) effectively a stepping stone to the first team, players here learn lots of the skills they need to play in the first team. He made an impact in this squad straight away and has since claimed the academy’s inaugural ‘Player of the year award’ no mean feat when you look at the players the Portuguese star is up against.

With a stocky build and relentless tenacity he has been likened to former member of the club Carlos Tevez, however I would liken him more to current team mate Sergio Aguero with his incredible balance and surprising strength. Lopes also finishes extremely well whether it be from a close range ‘slotting of the ball’ or from outside of the box where power comes more into play. Again this is just another trait he has in his repertoire, which might I add will only increase with age.

He made his first team debut in an FA cup tie against Watford in January 2013 coming on in the 88th minute and scored within two minutes. This goal made him the youngest player ever to score for Manchester City, not bad for your debut right? He’s had success in the UEFA Youth League too scoring five goals in four games. Three of these were in a dazzling performance against FC Bayern Munich’s youth side which saw Marcos attract a lot of attention from not just fans but rival clubs too. If his UEFA youth league scoring record is anything to go by he might play a big part in City’s Champions league campaign next season.

Many players at this age can become distracted whether it’s by money or fame but Marcos has his head fixated on football and knows the importance of performing when given the chance with the first team. An interview with him furthers this point:

Cup games represent a big opportunity for younger players at the club and I’m looking forward to being involved in more matches, it’s a different level playing for the senior team – a high-intensity 90 minutes, but it’s good for me to learn with these players and play these games. I have to do my work and my job and hopefully I’ll get more chances.

Now captaining the EDS side for 2013 / 14 campaign it is impressive to see such a young player taking it seriously and making the necessary commitments. Dedication and natural ability are a frightening combination when used together and Marcos possesses both of these qualities. I can’t help but be reminded of fellow countryman, Cristiano Ronaldo when looking at Lopes. His stats in the national team are impressive too with the youngster representing Portugal in the Euro U19 championships in the summer of 2013, at U19 level he has scored 11 goals in 16 games.

Off the back of his performances with the EDS squad and his showing in the U19 championships the maestro earned himself a call up to the first team on their 2013 / 14 pre-season tour of Austria and the Far East. He played six out of the seven games impressing fans and staff alike.

Rony as he is affectionately known has recently started featuring more prominently in the first team squad albeit playing in cup games but they are still an opportunity in which he has seized with both hands. He’s also grabbed headlines of late with his impressive performances, in particular a game against West Ham in the League cup semi-final assisting two goals in a 3-0 win. Pellegrini was very pleased with Lopes’ performance in this game stating:

Marcos is a young player with a great future; he is just 18 years old and played with the personality he needs to play in our team. I’m very happy for him because he deserves it – he is a very important player for the future of the club.

With the obvious backing of the City manager who’s to say Lopes can’t take the club to new heights, he’s got the talent. A natural finisher and sublime passer of the ball, vision is certainly something that the Portuguese genius isn’t lacking. Marcos Lopes is definitely one of my tips to watch within the coming years, he will only go from strength to strength. I will leave you with the thought that he at 18 has already broken into one of the most formidable sides in the world, the best is yet to come.

A video on Lopes that is definitely worth a watch.