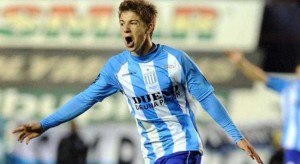 Touted by many as the “new Aguero”, Racing Club attacker Luciano Vietto has really put himself on the Argentinian footballing map over the past couple of seasons. At just the tender age of 20, Vietto has already played over 50 league games for his club and has scored 17 goals since his debut in 2011 under then coach Diego Simeone.

Vietto is seen as one of the stars of the Argentinian First Division, and one of the brightest prospects of South American football, and it seems that his reputation is now being extended to Europe, with Liverpool, Real Madrid and two unnamed German clubs vying for his signature.

In fact, Real Madrid actually had an £8million bid rejected for Vietto when he had only 10 senior games under his belt, the club claiming that  “We just want to enjoy him, there’s no reason to put a price on him. We have the South American U20s coming up in January and his profile will only get bigger.”

However, now an established Argentina u20 international (with a goal ratio of 1 every 2 games), it seems Racing will be unable to resist bids coming in from top European clubs such as Madrid and Liverpool, should they meet the £15million asking price.

So what is it that Vietto offers?

Although certainly not the most physically imposing, Vietto possesses a spectacular burst of pace, and his low centre of gravity means that he is not easily knocked off the ball. A man with fantastic ball skill, Vietto is known to tie defenders in knots with his direct, pacy and step-over laced attacking style.

Blessed with fantastic technical ability when striking the ball and finishing ability comparable to some of Europe’s top attackers, Vietto has the nous to beat a goalkeepers from anywhere inside the box. Vietto also shows good attacking versatility, equally adept as an out and out forward, as a false 9 and as a winger, an asset that is not to be taken lightly.

At the age of 20, the Racing man is still very young and has time to improve as a footballer, but his exposure to first team football from a young age has seen him mature very quickly, and this will hold him in good stead as he looks for a move over to one of Europe’s elite leagues.

As a Racing player, Vietto is in good company, with the likes of Diego Simeone, Diego Milito, Claudio Yacob, Claudio Lopez and Lisandro Lopez all having come from Racing Club over to Europe with great success.

Vietto certainly has the attributes to succeed at one of Europe’s top clubs, and I predict that it will not be long before the name of Luciano Vietto is a household name on the international stage.