Trying to project a young player both in the current state and of their future self is a tricky kettle of fish. You are trying to be cognisant of not putting so much weight on what their potential might be that it skews to some extent what the player is right now.

It’s such a delicate practice because it’s not just the player you have to examine, but what the surrounding environment is and how much of that is to be blamed or credited for the form that is being produced.

It’s one of many reasons why player scouting in football is a thankless job for scouts, data analysts in football teams and even managers who try and watch film. There’s so many variables that teams have to tank into account with a prospect that even the best scouts and coaches will mess up on the regular when it comes to prospects.

All of that perfectly applies to Lyon forward Clinton N’Jie. The young Cameroon forward is playing his first full season in the French first division and the level of his performance has sparked an interesting conversation between data and the eye test.

No not one of those conversations where one side yells at the other like you still see in the hockey media, but more based around what a healthy skepticism of a fair reflection on a player’s ability currently.

People who play with data a lot like myself look at N’Jie’s performance and see a burgeoning solid support striker, especially considering his youth and lack of experience in Ligue 1, evidence from this:

Players born >=1993. Vietto is on the march. Babacar hitting the corners. Kane up there. #stats pic.twitter.com/UXrFyy5WP2

It was a bit shocking to see that N’Jie was doing so well when it came to expected goal data for players born before or after 1993. I posted something on Twitter that while not close to the same complexities also had a similar undertone, remarking at how efficient N’Jie has been given the circumstances. An interesting conversation came about.

And then there was this, which came about from the original tweet surrounding N’Jie’s expected goal data. 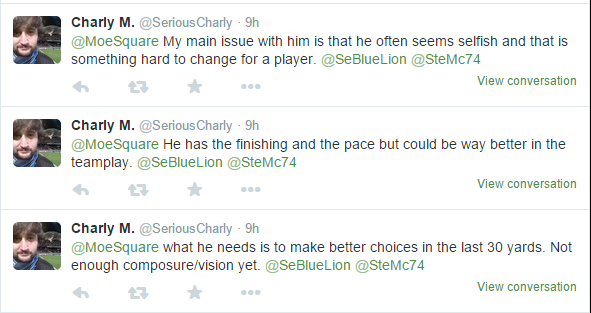 The common refrain was that N’Jie’s data, while really good, isn’t a true reflection on the current product. This won’t be another one of those “stats versus scouting” columns because frankly, the argument is antiquated and isn’t worth dissecting for the millionth time. More so the point is to dig deeper to what exactly we have with Clinton N’Jie 1000 minutes into his Ligue 1 career.

It’s a bit funny that we even are trying to make out what a player is when all we have is 1000 minutes as a sample size. Something that football is still lacking is some rough baseline minutes wise where we can make an educated assumption on what a player will roughly be the rest of their prime, before aging curves and injuries take their place. Nonetheless, 1000 minutes in, what exactly is Clinton N’Jie so far?

In Lyon’s system, manager Hubert Fournier plays some version of a 4-1-2-1-2/4-3-1-2. The width is created through both their full backs and their front two drifting to the flanks. 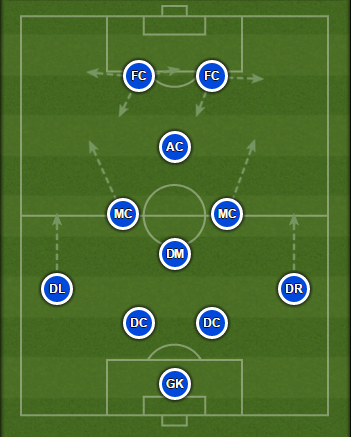 The system is based on quick attacking movement and the presence of a resourceful striker. This is where Alexandre Lacazette is key to this. Lacazette’s ability to create shots both for himself and others centrally makes himself the key cog in Lyon’s attack.

Nabil Fekir can be played as either a support striker or a #10, both the central midfielders (especially Corentin Tolisso) have the freedom to go forward and play long balls, and the fullbacks also give the necessary width whenever the two strikers don’t drift.

N’Jie at times fit and at other times doesn’t. His speed and directness are his best assets which on certain occasions look absolutely terrifying, particularly when Lyon ramp up their speed and flow of movement.

N’Jie’s fit defensively is perfect. His young legs help contribute to Lyon playing a pretty aggressive 4-3-3 defensively that at its best can overload the flanks and force turnovers

Offensively, Lyon rank second in Ligue 1 in shots on the counter attack this season and third in open play shots. The system encourages shots to be taken (within reason) and N’Jie does a really good job at that, particularly when it comes to the % of shots that hit the target. His ability to dribble out of situations and on occasion find his teammates are impressive, signified by his five assists this season.

I personally sense a slight dissonance on how good a playmaker N’Jie is currently despite his assist tally. Yes, five assists for a forward is notable as it leaves him tied for third in Ligue 1 in assists. But the lack of key passes (chances created that aren’t converted) for N’Jie overall is a decent signal that the amount of luck that N’Jie is been benefitting from is noteworthy.

Furthermore, three of the assists came when he was put on as a substitute, and there’s been evidence on the considerable amount of inflation that sub effects has on a forward’s statistics. There’s visible evidence of the chasm in playmaking production when it comes to N’Jie.

The Lorient game was by far Clinton N’Jie’s greatest performance this season, as he played alongside Lacazette in the front two. It was the total package of what you would want from a right sided forward on that day.

Terrifying on the ball, finding his teammates when available, and timing his runs perfectly when given the opportunity. His assist to Lacazette while not the flashiest was perfectly weighted to allow him to wind up for the shot.

This is the good N’Jie, the one that more than confirms what the data paints him as. The type of second striker you would love to have on your team. But this isn’t the whole story with N’Jie, which makes the criticism fair game.

For the considerable amount of pace and dribbling prowess, there’s a certain amount of individuality that N’Jie exhibits which makes it look like it’s a singular challenge.

This isn’t necessarily a bad thing. Great forwards will have their fair shares of 1v1’s, but at his current development, N’Jie isn’t good enough yet to beat his man at a decent efficiency given the amount of times he’s in these situations. Take this instance versus Bordeaux.

A potentially huge counter attack opportunity was on the board for Lyon while the game was still in doubt. You can see Fekir calling for the ball just before as Lyon looked to have gained a possible counter attacking threat. 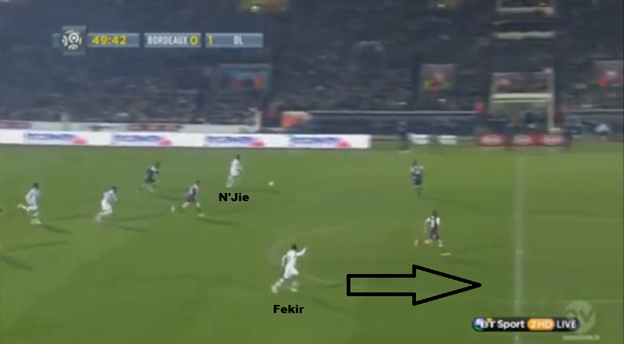 N’Jie however took on one too many touches and lost possession of the ball. A lobbed pass to Fekir would’ve created a 1v1 opportunity higher up on the pitch but instead it went for not. A similar moment happen against Lorient a couple of weeks ago:

It’s almost the epitome of N’Jie. His talents as a dribbler married with the singular approach he more often exhibits. N’Jie makes a nice shimmy to get himself a great opportunity to lay it off to Cornet. 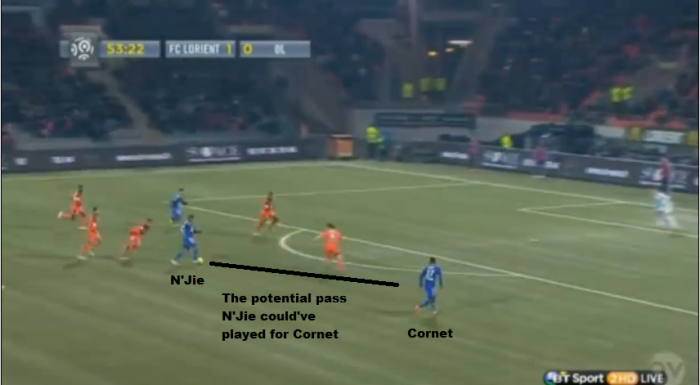 The potential pass N’Jie had could’ve ended up in a goal for Cornet considering the area Cornet was on and how perfectly aligned his body position was to receive the potential pass. Alas nothing came from it as N’Jie tried to make one too much move and lost the ball.

That’s the bad N’Jie, the one who averages 4.9 unsuccessful dribbles per 90 that ranks first in Ligue 1 this season for players that have started at least five games. For reference, the next highest is Romain Hamouma at 3.6. Only converting 31.9% of dribbles this season is a low mark that N’Jie will need to improve on.

Through 1000 minutes, the amount of positive things that could be said about Clinton N’Jie are almost as long as the deficiencies in his game. His dribbling can be his best and worst enemy. It gets him out of trouble when need be but it can also stall the tempo of Lyon’s offence.

His playmaking at this stage is nothing exemplary but it does the job. N’Jie’s best performance also was beside a natural striker and though he scored versus PSG/Lorient in back to back weeks, he didn’t look as comfortable playing with another support striker as he did with Lacazette.

His deficiencies are apparent but most of his flaws are to be expected with 21-year-old rookies. What will become of him as he grows older? We don’t know, but hopefully he’ll be able to learn and grow in Lyon for the foreseeable future without being pried away by the big money teams in the English Premier League.