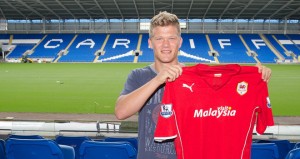 Introducing Andreas Cornelius; a major coup for Cardiff City in their first season as a Premier League side. Cornelius has arrived to score goals, something the club will desperately need to maintain their status in the top flight. Here, I take a closer look at the little known Cardiff new boy and analysing his chances of success in the Prem.

Robust, brave, powerful, it’s not hard to understand the origins of his affectionate nickname amongst Copenhagen fans: ‘The Danish Tank’.  With more than a goal every other game in only his first season at the top of Danish football, the 20 year old certainly has potential. Coupled with his commanding physical presence, an aerial dominance and tireless work rate, Cornelius has the makings of a leading Premier League target man.

However, there is more to him than his physical qualities; the Dane provides intelligent hold up play and an almost unexpected vision, indicated by 5 assists, a greater tally than Premier League target men Christian Benteke, Romelu Lukaku and Edin Dzeko.

Additionally, the 6ft 4in forward has surprising speed and technical ability, attributes exhibited against Superliga outfit Rangers, leaving supporters salivating as he produced a stunning show of ball juggling around helpless defenders before firing towards goal. Clearly, he is more than your typical target man.

Moreover, the striker is an accomplished finisher and adept at using both feet: over 16% of his goals last term were scored with his ‘weaker’ foot. Yet, arguably the best aspect of Cornelius’ game is his aerial ability, as he utilizes his strength and stature to dominate defenders. Eight of Cornelius’ goals last season were headers, a figure that equals the most headers scored by a striker in any of Europe’s top 5 leagues.

Despite his undeniable talent, doubts were inevitably raised as Mackay broke Cardiff’s record transfer fee for the rangy forward, many questioning his talent and ability to adapt to the Premier League style. Uncertainties supported by Cornelius’ inexperience after only one season in the top flight – of the Danish League.

Unsurprisingly, Cardiff gaffer Mackay disagrees: “Cornelius has great potential and is a very good capture for the club”, though, notably, he isn’t talking up Cornelius’ current ability, instead focussing on the young man’s potential ability, potential he may not be able to harness.

In addition, within weeks of his arrival, Cornelius has obtained an injury, suggesting that he cannot adjust to the physicality and pace of the Premier League, even in training. A claim backed up by a variety of match reports of Cornelius’ debut with Cardiff, against Forest Green, stating that he seemed surprised by the decisive, physical defending by the Conference Premier side.

However, there is some support for Cardiff’s new number 9, particularly from followers of Danish football and Cardiff City fans. A tangible sense of intrigue surrounds Cornelius, with Cardiff fan forums are littered with fans expressing their optimism and excitement, declaring “He is gonna be a BEAST” and “I’ve got a good feeling about this lad”.

Likewise, Manchester United favourite Ole Gunnar Solsksjaer has been lauding ‘the Danish Tank’; “He has speed, skill and of course he is good in the air”, says the Norwegian, before adding “He has the ability to go as far as he wants in football.” The aforementioned heading talent will help Cornelius integrate seamlessly into Cardiff’s style, as the Bluebir-sorry, the Red Dragons scored the most headed goals in their division last season, with 23.

Plus, the tall hitman will almost certainly get a good supply, as Cardiff have an abundance of wingers including Craig Noone, Don Cowie, Tommy Smith and diminutive Welshman Craig Bellamy. Also, Cardiff’s top assist makers last season were wide-men, suggesting Cornelius will not only get quantity, but quality; a situation not dissimilar to the one at previous club Copenhagen.

Cornelius is a natural fit for Mackay’s favoured formations, involving one frontman with someone supporting him, in either a 4-5-1 or a 4-2-3-1. However, Cornelius must become accustomed to this tactic after playing in a 4-4-2 last season, alongside Norwegian Mustafa Abdellaoue. For this familiarisation to occur, the youngster must be afforded game time, game time that may not be assured despite his hefty fee.

Even more worryingly for Cornelius, he must compete with as one of 6 strikers this season for a first team place, competition heightened by the fact that Mackay will favour formations with a solitary frontman. This leaves little time to settle for the Danish prodigy, especially with players like Frazier Campbell and Nicky Maynard desperate to prove a point in England’s top flight.

Nonetheless, the muscular attacker remains calm and composed in front of the media, even when questioned about the budget breaking price tag above his head, Cornelius shrugged off the implications: “I see the price paid as a motivation for me. If Cardiff wants to pay that amount of money for me then I must be good and they must believe that I’m good.”

His confidence may be misplaced, however, as not many players have survived the turbulent trip from Scandinavia, one such player being former Sunderland poacher Rade Prica. He joined Sunderland from Danish side AaB for a fee in excess of £2 million, and, since his arrival in the North East, made 6 appearances, scoring 2 goals. He failed to start a single game for the Black Cats and was largely ignored by management during his brief stay.

Similarly, Senegalese attacker Mame Birame Diouf was unsuccessful in England, perhaps attributable to the intense anticipation surrounding the young prospect. He earned 5 appearances for Manchester United before being shipped out to Premier League strugglers Blackburn on loan. It was a similar story at the Lancashire club, as the forward failed to make an impression, and not for the want of opportunity. The forward flopped in England and was sold to Hannover. A year on, the powerful forward is hot property, with a host of Prem clubs vying for his signature.

On the other hand, not every player who has made the transition across the North Sea has collapsed with the pressure of expectation or failure to adapt, a prime example being veteran ‘keeper Thomas Sorensen. Having spent 15 years in the Premier Division, and currently playing (bench warming) for Stoke, the Dane has been an integral asset for his previous teams. Overlooking his occasional unreliability and tendency to make a howler, Sorensen has been consistency personified and a model professional.

Equally, Kiwi centre half Winston Reid has had unprecedented success subsequent to joining West Ham after an impressive World Cup Campaign. Reid was rarely used in his first season in London, making a handful of appearances. Though, since the Hammers’ relegation, Reid has been a stalwart at the back, earning 58 appearances in a couple of seasons. He coped well with the move from Denmark, albeit with a season to settle, take note Cardiff.

In contrast to Reid’s consistency, Malky Mackay’s has been hit and miss in his striking purchases, much like the forwards in question. Arguably the biggest error was the signing of Scottish journeyman Kenny Miller, for approximately £2.5 million. He made 43 appearances for the Welsh side, scoring a meagre 10 goals. Similarly, the acquisition of experienced poacher Robert Earnshaw failed, as the striker found the net only 3 times in nearly 20 games.

Moreover, the most recent addition of the array of flops, Rudi Gestede arrived from Metz and failed to make an impact. The lanky Frenchman misfired, despite 51 games in Wales, scoring a measly 7 goals. Ultimately, Joe Mason was unsuccessful at Cardiff City Stadium, although he made almost 70 appearances, he scored a mere 15 goals.

Evidently, Mackay is not the most astute shopper, yet, to his credit, he has operated shrewdly at times, reflected by signings such as Troy Deeney, who was prolific last season for the Hornets, Heidur Helguson, who top scored for Cardiff last term and Man United Academy graduate Frazier Campbell, who has played in 12 games since he joined City mid way through last season, notching an impressive 7 goals in that time.

In conclusion, Andreas Cornelius is a gamble, a 6ft 4in gamble. Granted, the most successful players from the Superliga don’t play in the same position as Cornelius, and the players that do have fallen flat on their face in the Prem, but Cornelius is cut from a different cloth. His physique and aerial presence will mean he will slot naturally into the Cardiff City and Premier League style. Furthermore, he will get the supply from the Welsh club’s marauding wingers and deep lying playmakers. Mackay may have struck gold with this acquisition, which hinges on sufficient game time and a lack of injuries.

Will he succeed? Yes. Cardiff needs a source of goals, particularly with Helguson’s departure; Cornelius will fill the rather short void up front. Bring on August 17th.

One thought on “One 2 Watch – Andreas Cornelius”