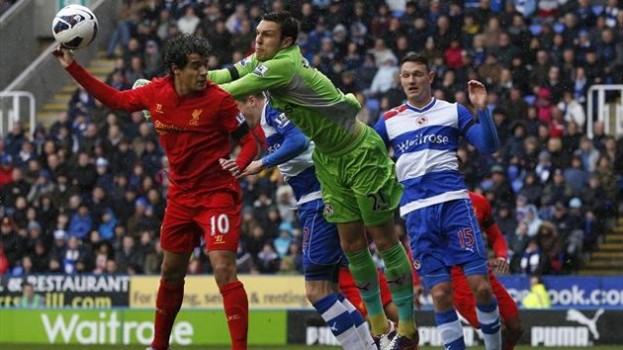 England squads have never been predictable. Even under the unimaginative Mr. Capello, rumour-mongers would be thrown off the scent, usually by the Italian omitting the most in-form players and including the same old guard (see the 2010 World Cup squad announcement, where an audible collective groan could be heard across the country).

While Hodgson’s selection format isn’t completely watertight either, he does see the value in resting some of the more regular starters for friendlies, and it’s for those reasons that goalkeeper Alex McCarthy has become a household name in the past 24 hours following his call-up to the national squad.

Perhaps unknown to many, Reading fans will sing his praise all day long. McCarthy is an academy graduate at Reading, having worked his way up through the ranks and various loans to cement his place in the first team. His path has not been easy by any stretch, but following a series of top performances, few can argue against his inclusion for the friendlies versus Ireland and Brazil.

McCarthy’s loan repertoire had included Woking, Cambridge and Aldershot before a particularly fruitful 2009/10 loan at Yeovil Town saw him keep 12 clean sheets in 44 appearances and give the Reading hierarchy the first glimpses of his potential. Yeovil’s manager Terry Skiverton said of McCarthy: “Alex has been fantastic for us this season and not just on the pitch. When you need your keeper to make two or three good saves he has stepped up to the mantle. He’s always trying to gain that extra edge and is often up the local gym looking after himself.” A glowing review of a player whose noticeable humility is as worthy as his clear shot-stopping ability.

A short loan at Brentford at the start of 10/11 followed, before he returned to Berkshire in what would become his breakthrough season. In February 2011, the Royals’ first choice ‘keeper Adam Federici injured himself in a 1-1 draw with Watford. McCarthy came on late in the game to mark his debut with a quite remaining ten minutes. Many were unsure of McCarthy’s ability to hold fort between the sticks, especially with Reading looking to keep up a late season revival and push for the play-offs. But did he disappoint? Absolutely not. McCarthy’s first full game versus Millwall was won, and he saved a penalty in the following fixture – a vital 3-3 draw with Crystal Palace – where he also made two vital close range saves to keep the Royals in the running. He gained more attention as Reading travelled up to Goodison Park for the fifth round of the FA Cup. Again he took the plaudits, especially for a sensational point blank stop on Leon Osman, as Matt Mills secured the victory.

McCarthy retained his place in goal for the following 11 fixtures, including the FA Cup Quarterfinal loss to Manchester City, before Adam Federici was reinstated for the final two games of the season, and perhaps harshly on McCarthy, the playoff semis and final. His stint in the first team had given himself and the fans a taster of what was to come, but 2011/12 would represent a backwards step in the promising goalkeeper’s career. Federici remained as Brian McDermott’s first choice, and McCarthy found league appearances hard to come by, being restricted to the League Cup. McCarthy expressed a desire to play first team matches regularly, and was loaned to both Leeds and Ipswich during the season which Reading won the Championship.

Despite not playing a part in the title-winning team, McCarthy had captured the hearts of the Royals’ fans with his fleeting heroics at the club, as well as impressing in the two recent loan spells. There was little doubt that Federici would begin the Premiership campaign in August 2012 though, given his stalwart efforts the previous season. Unfortunately for the Royals, Federici couldn’t quite keep up that level of performance, gifting Stoke and Chelsea goals in the first two games of the season. McCarthy was entrusted with the jersey for the following nine games and impressed mightily against QPR and Swansea, and looked like one of very few players to shine for the Royals. Whispers began in October about a possible future for the Three Lions, but were cut short following an injury. After tipping an Adel Taarabt effort wide at Loftus Road, McCarthy collided with the post and required shoulder surgery. There were questions over whether he would return to contribute to the Royals’ season, but return he did with aplomb.

New manager Nigel Adkins used his first two games in charge to try out Federici and third choice ‘keeper Stuart Taylor, and gave McCarthy a shot in his third game, when Liverpool travelled to the Madejski. McCarthy produced one of the finest goalkeeping displays surely in Premier League history to keep the score at 0-0, and was lauded by teammates, pundits, and former figures in the game. Match of the Day waxed lyrically about his performance, while Brendan Rodgers hailed him as a top talent. The Premier League sat up and took notice of Alex McCarthy.

Alex McCarthy seems to be a genuinely humble, nice and focused guy. He’s hungry to play, but has never thrown his toys out the pram, especially during the 2011/12 season when his future at Reading was questioned. His lanky frame doesn’t undermine his acrobatic prowess, nor his strength. You’ll often see him commanding his centrebacks, and he has copious amounts of confidence in himself, without letting it spill over into arrogance.

The reaction to McCarthy’s call up to the England squad has been mixed. When looking at the other options, he’s surely earned this . Fraser Forster had a fantastic experience in the Champion’s League with Celtic, but since they were knocked out hasn’t had to compete on the highest stage. David Stockdale at Hull could prove his worth in the Premier League next season, as could Jack Butland. If McCarthy doesn’t move in the summer, he’ll be in the Championship with Reading which will surely hamper his international ambitions. But until then, in Alex England have a capable, eager, young third choice goalkeeper.