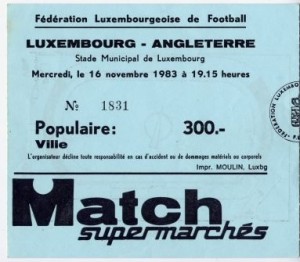 Hooliganism is something that is beginning to be confined to the annals of history in English football, but it isn’t that long since it was seen as a essential component of Saturday afternoon’s entertainment. Violent “firms”, particularly those associated with clubs in deprived areas of London, made frequent headlines in the Thatcher era. There was also a serious issue around supporters of the English national team, high on a sense of misplaced patriotism.

In keeping with this trend, on November 16th 1983, a significant number of England fans were arrested in Luxembourg, after a night of mindless thuggery.

The fans were held on charges relating to intoxication, fighting and theft after England failed to progress to the upcoming 1984 European Championship finals in France, despite a comfortable win over the Luxembourgeois minnows.

A victory by Denmark over Greece, earlier in the day, meant that England finished only second in their group. Thus they missed out on qualification, in an era where the emphasis was on group winners progressing.

A 4-0 scoreline at the Stade Municipal did little to placate the frustrated spectators and trouble sparked inside the arena with at least two police officers suffering serious injuries. The disruption then spilled out of the stadium and into the city centre streets, with fans overturning cars, vandalising shops and otherwise terrorising innocent residents of the area.

So bad was the rioting that around 500 police officers and 150 members of army personnel were called in to put an end to the activities of the English travelling support.

The events of the 16th had been foreshadowed, even before many of England’s 2,000 fans had arrived in Luxembourg. Despite the anticipation of local authorities that there might be a repeat of disturbances that occurred in the late 70s, trouble came about across Europe. English fans en route to Luxembourg, en masse, assaulted railway workers and members of the emergency services in Belgium.

As violence peaked on the 16th, riot police from neighbouring West Germany were called in to support the Luxembourg forces, who were severely out-manned.

Even innocent English fans were affected, as local bars and restaurants would not welcome them, and many were banned from their hotels and were left to spend the night sleeping rough on the cold streets of the capital.

On their way out of the country, the English were escorted onto trains by the home security forces. Trains that had been chartered for an earlier time than usual, to put an end to the madness.

In the fall out from the events, a total of 50 fans were arrested. Thirteen received custodial sentences, some of as many as four months in prison. Fines of around £250 were meted out. At the time, Luxembourg’s sports minister decreed that the country would never again play host to a fixture with England, as the English gained a growing reputation for poor conduct, across the football world.

The knock on effects of such incidents were felt domestically too, as stricter controls were imposed to reduce instances of such violence in English grounds. Standing areas and accoutrements such as flags, bottles and other potential weapons began to become a thing of the past.

Even in the 1990s, English national team followers still had a reputation for hooliganism. There were a number of incidents during Italia ’90 which perpetuated the country’s black-eye. It wasn’t until the well-behaved Japan-Korea World Cup of 2002 that English fans were truly able to regain their good name.