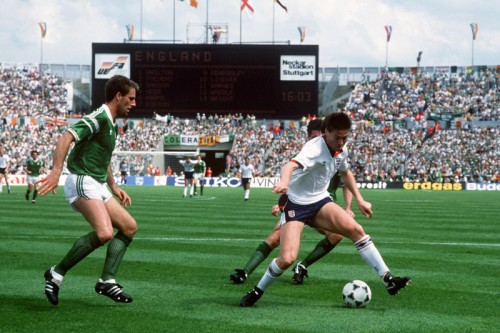 This week England hosts the Republic of Ireland at Wembley. Curiously, this will be only the 15th time the sides have met in post-war competition. This is in part due to the tempestuous political situation that provided a backdrop to relations between these two counties. Despite the scarcity of the fixture it has provided some unforgettable moments, not always for the right reasons. Here’s a run down of the most memorable clashes .

During the 1940’s Irish football had the curious situation of effectively having two national teams. The IFA organised team, based in Belfast, had been regular opponents for England since the 1880s. The FAI team, based in Dublin, was in essence the pre-cursor to the Republic of Ireland national team. Players regularly lined out for both, sometimes within the same week. The FAI general secretary Joe Wickham was keen to celebrate the 25-year anniversary of the organisation with a marquee match. To Wickham’s surprise England accepted the invitation, and so on a foggy September day in Dublin 30,000 packed into Dalymount park to see Ireland battle all the way to the 82nd minute when Tom Finney scored the winner for England. Despite the loss it signaled the intentions of the team then called ‘Eire’ to be not only participate but also be taken seriously on the international stage.

‘Which country was the first foreign team to beat England at home?’ a question favoured by pub-quiz connoisseurs. The answer is accepted as Hungary’s seismic 6-3 win over England in 1953. Except that answer is wrong. Four years earlier in Liverpool the team of the newly formed Republic of Ireland achieved a shocking and historic victory over their rivals. Walter Winterbottom’s side had the lion’s share of possession throughout the game and threw caution to the wind in search of an opener. However 22-year-old goalkeeper Tommy Godwin was in inspired form repelling every shot that managed to get through a rock solid Irish defence. Ireland took the lead in the 33rd minute when Con Martin converted a penalty after Peter Desmond was brought down.  The sting was gradually taken out of England’s attacks, with FWA player of the year and Manchester United captain Johnny Carey nullifying the treath from Finney. The tie was settled in the 85th minute when Peter Farrell was sent through and coolly beat the on-rushing Bert Williams.  This game has been rather strangely wiped from the collective consciousness of both English and Irish supporters, the English media perhaps finding it more palatable to record a defeat to a team including the genius of Puskas. For Irish supporters it is a victory which should be celebrated with the greatest in the nation’s history.

“Who put the ball in the English net?!” so goes the song that rang out from the Irish fans on that scorching hot afternoon in Germany and in matches ever since. The answer is of course Ray Houghton.  The game itself was defined less by his looping header in the 6th minute and more so by the 84 minutes of heroism that followed it. Sure Ronnie Whelan hit the bar, but down the other end Celtic goalkeeper Packie Bonner was in inspired form. In what seemed to develop in to a personal duel between himself and striker Gary Lineker, the Donegal man utilised his hands, feet, knees and head to pull off a number saves denying England what was probably a deserved equaliser. The Irish fans however could care less. The match itself has gone down in folklore and signalled the beginning of a golden era for Irish football.

Hindsight is a wonderful thing of course. And in retrospect the notion of playing an international friendly between the two countries at that time seems ludicrous. Whoever said politics has nothing to do with sport has obviously never truly studied either. Relations were strained by (amongst other things) IRA bombing campaigns, and a hard-line conservative government’s refusal to negotiate. Add into the mix a rampant hooligan element within English football supporters, an antiquated stadium desperately needing modernisation and an Irish police force seemingly unwilling to heed advice from their counterparts in the UK. The match itself was played in good spirits and high tempo.  David Kelly gave the hosts the lead in the 21st minute. Then it started. At first small pieces of debris fell onto the Irish fans, rather inexplicably, seated below the England fans. The chants of ‘no surrender’ got louder. To tell you something of the mental capacity of those rioting a plank of wood narrowly missed Sol Campbell who was warming up on the side-lines. The match was eventually called off minutes later, officially noted as a draw yet in reality all of football lost that night. That was 18 years ago, the changes that have been implemented in wake of incidents such as Lansdowne road have not fully cured the cancer but have certainly put it into an ostracised remission. Through hard work and self-regulation we can state that the only thing fans at Wembley will have to worry about are the bragging rights.