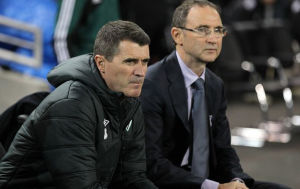 As the dust of the Republic of Ireland’s two most recent stuttering victories continues to settle, the prospect of O’ Neill’s men following the road all the way to France 2016 now seems that much clearer.

Witnessing them in action under the strains of competitive pressure has made it  great deal easier to pinpoint exactly where the strengths and weaknesses of this squad lie; given time, it should facilitate a clear roadmap they can follow as a unit.

Reflecting back on the aftermath of the Oman friendly, Martin O’ Neill delayed his entrance to an expectant and restless press room to deliver his calculated post-match conference. Given the nature of the tie that night, though, there wasn’t a lengthy list of urgent talking points to rummage through and the 62-year-old only spent the guts of six minutes responding to questions. On the positive side, Ireland had won. But they would have anticipated a triumph to prepare them for what still lies ahead.

Looking at Paul Le Guen’s squad that night, there was just one name that really jumped out at you – Ali Al Habsi, their goalkeeper, a player that stood out on the team sheet solely because he’s the only squad member to currently ply his trade in Europe. So, it was clear before the build-up that the home side already had a number of clear advantages. But even their custodian wasn’t their best performer – that accolade went to their no. 8, Eid Al Farsi who put in a commendable performance moving from box to box in an effort to conjure up something meaningful.

In the opening 45 minutes, however, Al Farsi and his team-mates didn’t do much to trouble Shay Given as the returning shot-stopper’s influence was limited to bellowing intermittent commands at his defenders over an, at times, eerily quiet Aviva Stadium. Incidentally, his recall to the set-up after a two-year absence prompted a numer of questions, namely about stagnation in the squad, a lack of emerging talent forcing its way into the nation’s plans and, finally, inaction on O’ Neill’s part to follow up promising leads from the League of Ireland.

Unsurprisingly, the manager himself was quick to confirm that he had fielded a largely experimental side against the Omani’s out of necessity more than anything, insinuating that his hands were tied when it came to choosing his strongest team. But his choices were, in some cases, odd. Putting David Myler at right-back as well as handing Richard Keogh the captain’s armband seemed to suggest that the managerial duo, while eager to instigate change of some sort, didn’t seem to know how to do it properly.

In the end, however, Myler stole the show with a fine performance and Keogh coped well – but it still begged the question – would these decisions work so well against better outfits on the road?

That remains to be seen but their next match against Gibraltar, which they ought to win handsomely, should allow them the opportunity to settle even more in preparation for the monumentally arduous task they face at the Olympiastadion in Berlin, come mid-October.

Defending his selection against Oman, however, O’ Neill told the sparsely populated room:

Someone next door just asked me the question, ‘Were you hoping that you could maybe play your starting XI?’ I thought that was just an impossibility, even if I’d wanted to tonight, because of the situation we found ourselves in.

Mind you, at the time, it was still difficult not to wonder exactly why it was both Given and Rob Elliot that had featured in their final warm-up game before the 2-1 win over Georgia on Sunday evening instead of Kieran Westwood or, indeed, Milwall’s David Forde. The practicality of it just seemed a little too far askew from an outsider’s perspective.

Towards the end of the friendly’s press conference, one journalist even piped up to again probe the issue that we were still no closer to discovering who would be the Green Army’s no.1 choice for the qualifying matches against the likes of Poland, Scotland and Germany.

I’m not expecting you to answer this, Martin but, in your own head, do you know now which goalkeeper you will start on Sunday?

The boss’s response was swift and, in retrospect, very telling, declaring “OK, I won’t answer that so!” A hearty chuckle greeted his dry response as the manager quickly departed the conference, but with Forde now seemingly maintaining a tight, gloved grip on the first-choice spot from the get-go, it looks as though Given’s return might not be what he’s been expecting. And it also revealed that O’ Neill is intent on keeping his cards close to his chest, something that underlines his desire to retain as much control and influence as he can.

And, in truth, this is probably a good thing. Because while it’s always a plus to have options of such custodial genius on the bench, O’ Neill definitely knows which options are his best right across the park, something that will stand the team in good stead as the group unfolds.

After all, juggling the demands of club football in terms of absentees, injuries and tugs-of-war with managers desperate to save players for domestic action, the former Sunderland chief needs to make sure the Boys in Green, regardless of caps, are ready and willing to jump into the fray with unrivalled determination and passion for the jersey if his preferred choices go missing – that’s what could give them the edge when the crunch comes.

Throwing Stephen Quinn into the match against Georgia as well as keeping the rest of his forwards hungry by sticking with the experienced Robbie Keane as a lone striker might have seemed like risky moves at the time, but O’ Neill is absolutely right to gamble.

Reflecting on it now, as Aiden McGeady inspired his side to a vital win in Tbilisi, it’s clear who’s in charge.

The former Celtic supremo knows his best players, but he also knows how to change things around, and perhaps most importantly of all, he’s fully aware that he can rely on others to stand up and be counted, something epitomised most vociferously of all by the reborn McGeady.

O’ Neill’s instilling confidence in the squad and he’s helping to nurture it back to health.