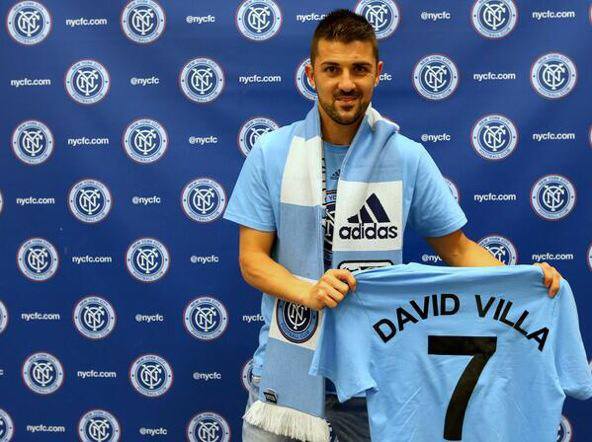 They don’t have a jersey, any games lined up, or a permanent home, but New York City Football Club this week confirmed the face of the franchise by signing Spanish international David Villa.

The 32-year-old, who is fresh from a La Liga title win and Champions League Final appearance with Atletico Madrid, put pen to paper on a three-year deal with the club.

“Throughout my career I’ve always tried to keep pushing myself to achieve new targets and this represents another important goal for me,” said David Villa.

“I want to try and help MLS continue to grow, through playing, working hard, scoring goals and at the same time try to make New York City FC become the best team in the league.

“It’s a real honour that the people who have formed the club have focused their attention on me.”

This is a big coup for NYCFC, with Villa still an important member of the Spanish squad that is aiming to defend its World Cup title in Brazil this month.

The club, which is owned by the same group as current Premier League Champions Manchester City, knew it had to set down a marker with its first member of the playing group.

“David Villa is undoubtedly one of the most accomplished soccer players and best strikers in the world,” said a delighted NYCFC Head Coach Jason Kreis.

“I couldn’t be happier that we have acquired such an amazing talent as our first-ever signing. David will be a shining example of what it will mean to be a New York City player and a leader for us on and off the field.”

With 56 goals in 94 international appearances to date, Villa is Spain’s all-time record goal scorer and only Alfredo di Stefano and Telmo Zarra boasts a better goals per game ratio than him amongst the top ten, though they played far fewer games.

He will wear the number seven shirt that he has become synonymous with at both club and international level, though we are still a while away from having the first NYCFC jersey for fans to buy with his name on the back.

Indeed, with no competitive NYCFC fixtures until the beginning of the 2015 MLS season, Villa will spend some time out on loan to ensure that he keeps his match fitness.

Once the World Cup is out of the way,  Villa will move to another club in the Manchester City group, namely Melbourne City in the Australian A-League.

Melbourne City, formerly ‘Heart’,  have been rebranded ahead of the tenth A-League season which starts in October, and Villa will join them for a ten-game guest stint.

A move Down Under for Villa makes perfect sense, and it could pave the way for a similar arrangement for any other NYCFC signings confirmed in the not too distant future, with Frank Lampard one of the names been touted as a pick up after he left Chelsea after 13 years.

Lampard has been touted with a move to Major League Soccer in the past and there have been claims made by the UK media that he has met with NYCFC representatives in Manchester to sort out a deal.

Both Lampard and Villa would appeal heavily to the football fraternity in New York as the new club looks to stamp its authority on a city currently serviced by the New Red Bulls.

Thierry Henry and Tim Cahill are the current figureheads at the Red Bulls but, with the former no guarantee to still be playing the game in 2015, there could be a gap in the market for NYCFC to exploit with their duo.

The important thing right now is for NYCFC to begin developing its own identity, and David Villa is the perfect man to kick it all off.