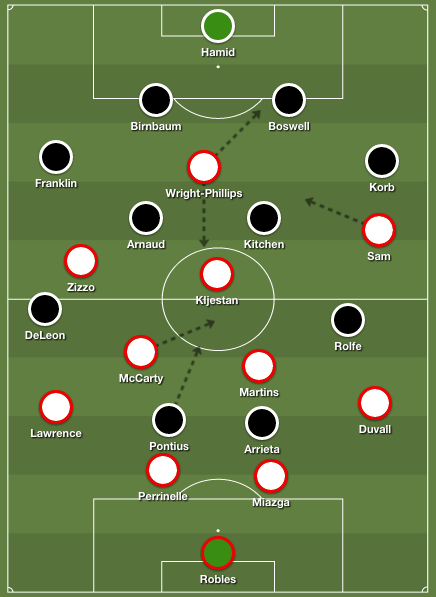 New York Red Bulls faced a mostly unchanged DC United side who, last season, finished with the best record in the Eastern conference.

Jesse Marsch, the new manager of NYRB, setup his side with a 4-2-3-1 structure, attempting to maintain possession against the fundamentally wider 4-4-2 of Ben Olsen’s DC United.

The base of NYRB’s midfield triangle was the indicator of the intended style of the team. Both McCarty and Martins are hard-working, technical players who are diminutive in stature but each relish a battle.

Throughout the match everything NYRB produced started with these two, with Martins tending to sit more, allowing McCarty to roam and put himself about.

The 4-2-3-1 shape gave NYRB a structural advantage with an extra, centrally located midfielder, as Kljestan dropped to combine but also had the legs to push beyond Wright-Phillips, dragging a DC United midfielder along with him.

The edge was obvious, as seen in a heat map by Whoscored. The lack of an attacking midfielder from DC United allowed for NYRB’s triangle to distribute the ball freely, without much pressure.

Dax McCarty was the key on both sides of the ball for a NYRB side who dominated for large periods. The midfielder had the most total passes and completed long balls offensively, while contributing defensively with the most tackles of all players.

His most successful long ball found a darting Wright-Phillips who had split DC United’s defense with his run. The forward finished calmly after gathering the ball amidst both center backs.

DC United could barely get out of their own half in the first 45 minutes of the game, allowing NYRB to have 66% possession. The high pressure of the home side allowed for offensive opportunities in advanced areas, while both wingers, Sam and Zizzo, tucked narrowly to combine with Kljestan and Wright-Phillips.

As NYRB’s triangle became more dominant, Pontius needed to drop deep into DC United’s midfield, to help cut out the influence of McCarty and Martins and to try to see more of the ball. DC United’s shape sagged as a result and the NYRB’s back line was allowed to squeeze the vacated space, creating an even tighter area of play.

In the second half Ben Olsen switched Pontius and Rolfe, giving DC United pace further up the field and hoping Pontius could be more involved in possession. Although the change didn’t result in goals, it did cause NYRB problems as both seemed to be more effective in their new areas.

As DC United grew into the game, Kljestan dropped deeper with his holding midfielders to solidify the defensive shape. This invited more pressure from the away side and Ben Olsen made changes to take advantage of NYRB’s narrow play.

Taylor Kemp came on for a tiring Korb at left back, which translated into more traditional wing play from an offensively minded defender. DC United’s second half attacks, although few, came down the left flank while Pontius pinched in to get on the ball, allowing Kemp to overlap and advance.

The high press of NYRB finally paid tangible dividends when Martins nicked the ball from Arnaud who was lazy in possession deep in his own half. Wright-Phillips was allowed to drive and combine with a tucked in Sam, who finished strongly by Bill Hamid on his near post.

In one of DC United’s only offensive bursts from midfield in the match, Arnaud broke beyond his forwards and drew a penalty. But, it was not to be DC United, nor Pontius’, day as the midfielder’s attempted sailed high above the cross-bar, deflating any chance of a come back.

The game was defined by NYRB’s dominant triangle, both offensively and defensively. The ingenuity and energy of McCarty and Martins at the base of the triangle allowed Kljestan to press high and force deep errors from DC United, and to combine with the attackers in the final third.

Although DC United’s second half changes positively impacted the game for the visitors, but the tempo and rhythm of the game was already dictated and the new width would not bear fruit.

Jesse Marsch’s structure prevailed, and a new look New York Red Bulls side played with balance and energy; a promising, tactical sign for a demanding, New York fan base.