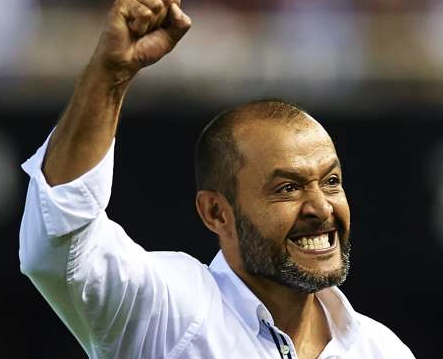 One of the most intriguing storylines in the opening weeks of the new La Liga campaign has been the revival of Valencia under the new stewardship of Nuno Espírito Santo.

Valencia have taken 10 points out of a possible 12 and look, once again, like a team that may be seriously thinking about Champions League football. Valencia were the Atlético Madrid of a decade ago when they broke the Real Madrid-Barcelona duopoly and clinched the Spanish title in 2004 under Rafael Benítez.

However, to say they could not maintain those lofty heights would be putting it lightly, as they plunged into a period of darkness following Benitez’ departure for Liverpool and the inability to find the appropriate successor.

Claudio Ranieri, who previously had been at the helm at the Mestalla from 1997-99, lasted barely half a season and left the side languishing in a state of mediocrity after Champions League group stage elimination and mid-table blues at home.

They have been through a string of managerial appointments since then – from Ronald Koeman to Unai Emery – all of whom failed to adequately satisfy the requirements in one of the toughest jobs in European club football.

However, despite only having occupied the touchline for four matches, Santo appears to be the right fit and has given the club a new lease of life as an exciting new era dawns in Spain’s third city. Along with a fresh influx of talent, Santo has reinvigorated Valencia to a point where they can seriously entertain thoughts of returning to Champions League football next season.

Valencia have started the season brilliantly, notching up three consecutive wins after salvaging a draw away to Sevilla in the dying embers of the opening day. They have looked confident, imaginative and expansive in racing past Malaga, Espanyol and Getafe, scoring three goals in each match. Santo’s attack-minded 4-3-3 has given licence to Pablo Piatti, Rodrigo and Sofiane Feghouli to be expressive and they have certainly obliged, with all three players scoring and creating goals in the opening games.

They provide the creative hub of the team and are supplying Valencia’s exciting new hope up front; Francisco Alcácer. The 21-year-old has started the season in a rich vein of form, finding the net three times already and looking already like he will be central to Valencia’s attacking philosophy this season. He linked up in a front three with Rodrigo and Piatti as Valencia brushed past Getafe 3-0 on Monday night that looks good enough to fire Valencia to a finish much higher than their disappointing eighth place in the last campaign.

Santo has given his players high praise following their impressive performances, commenting that they have given focused displays full of enterprise with an emphasis on utilising the talents of the attacking forces. But the former Rio Ave boss knows that their position at the moment is of little significance in the grand scheme of things, with several stern examinations of their development yet to come.

The important thing seems to be that Santo is keeping himself, and more importantly, his players, fully grounded after having already generated talk of a tilt at the title in some corners of their city. Santo is an intelligent manager, however, and knows he can not gauge the full extent of Valencia’s improvement until they come up against either Madrid club or Barcelona, the latter being the only team higher than Los Che in the current standings.

But it has been an arduous process getting Valencia back into this strong position. One of the recurring themes for the football club of recent times has been the talent drain of highly rated stars to bigger clubs and the process of replacing them. David Villa, David Silva and Roberto Soldado are prime examples of leaving holes in previous Valencia squads and this summer was no different, particularly in defence.

The transfer window saw centre-backs Jeremy Mathieu and Adil Rami leaving the Mestalla for Barcelona and AC Milan respectively, but their policy has meant they have found the right players to replace such influential figures. Shkodran Mustafi was drafted in from Sampdoria and looks to have settled into life in Spain reasonably well, ensuring that Valencia retain a level of security at the back and Nicolás Otamendi was signed from Porto to add further muscle to the rearguard.

With an agreement in place for Singapore businessman Peter Lim to take over the club, Valencia took advantage and secured the services of André Gomes and Rodrigo from Benfica. At 21, Gomes is a tremendous midfield prospect, having started all four La Liga games so far and scoring in the victory over Getafe.

With Rodrigo, Valencia have found an explosive attacking talent capable of becoming a genuine star in Spanish football. There are questions over his attitude and temperament, highlighted in his red card against Getafe, but he has already shown his skill in unlocking defences and finding the net to give Valencia added firepower.

Of course, arguably the biggest summer signing has yet to feature; Álvaro Negredo. Signed on a season-long loan from Manchester City on deadline day, Negredo gives Valencia strength and goals up front, ensuring that the pressure does not lie solely on the young shoulders of Alcácer.

Negredo may have alienated some sections of the Mestalla crowd at his official unveiling when he refused to kiss the Valencia badge. Being a man from Madrid, he may have felt a conflict of allegiances but he is not deluded in his mission at Valencia – score goals and rebuild his confidence after enduring a frustrating second-half to his début season at City when he struggled with form and injuries.

However, Negredo was a goal machine at Sevilla and there is every reason to suggest that, provided he stays clear of injury, he can emulate the form that secured a big-money move to the Premier League. His prowess in aerial duels will give Valencia different dimensions in attack as Rodrigo and Piatti can run beyond Negredo if he holds the ball up or flicks a header on. He also holds that precious quality of predatory instinct so Valencia fans may be forgiven for thinking he can be the man to salvage points with his goals.

The sky has turned from a dark gathering of clouds to a more positive, azure persuasion for Valencia as they look to scale the heights in La Liga. The season is long and tough and Santo knows that his inexperience in such a high-profile job will draw scepticism from some of the Valencia supporting vanguard but there is enough quality and balance to this squad of players to suggest that this season may be one to cherish for the six-time La Liga winners.

They will hope to continue their impressive start to the season at home to newly promoted Cordoba on Thursday night and away to Real Sociedad before their highly anticipated appointment with champions Atlético Madrid. One thing can be agreed upon though with Valencia; under Santo, they are a team in on an upward trajectory.