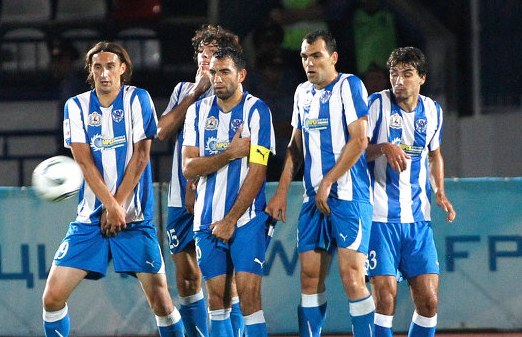 It was like something from a Monty Python sketch. There I was, on the phone to a friend whose club had just been told that the lump sum of money they were due from a transfer was likely never to be paid because the club who bought their former star had just gone belly up, four days before the start of the season. In fact it was the four club that had gone to the wall since the end of the longest (at least it felt that way) season in Russian football.

In the time since the end of the 2011-12 season (that began 4th April 2011), four clubs had left the second tier of Russian professional football, the same tier that lost a club through natural promotion (FC Krasnodar moving to the Premier League when Saturn Ramenskoye where run out of town) and another through sheer overindulgence last Summer – Zhemchuzniya Sochi. Fakel of Voronezh, one of the more interesting teams in Russian football, had come up at the last second to fill the empty spot, remaining bottom of the pile throughout the season. Their head coach, the well-connected Kostya Sarsania, performed miracles in the Cup and abominations in the league with a budget that made the eyes water. In a beautiful stadium (which just a couple of years back hosted a full international Russia-Belgium) with good local backing, the club scored just 34 goals in 48 games.  That they were even allowed in the Second Division, let alone the First was something of a political miracle which is an article all of it’s own.

However this season is more important. Allow me to draw a comparison (using the Championship in England for this coming season if I may).  Just after the end of the season rumours are confirmed that Middlesborough, due to ongoing financial difficulties and an unwillingness by the local and regional government to back them, are dropping out of professional football with immediate effect.  However due to history, local support and “North East” regional clubs wanting them to hang on in there, they’re let start the year in League One.  In their place, in almost a swap deal, regional neighbours Hartlepool United (if they’d just missed out on promotion) are put up into the Championship. So all’s well, for the minute. So we thought. With no wages paid to players or staff, or debts settled, for over eight months, Birmingham City call time and merge with Aston Villa.  The name Aston Villa remains, Birmingham keep their youth section but no adult teams. And then there were 23 left. Then there’s an announcement, Leicester City are not allowed to play in the Championship because of unpaid debts.  No appeal allowed, despite the club paying off debts owed to the FA and agreements in place with players and staff.  Suddenly foul is cried.  How did Hartlepool get up?  Those monkey hanging cretins (I like Hartlepool by the way and have family there) bought off the FA and the League people.  Why did they get up and others not considered?  Open letter appear, protests take place, but it’s summer, so everyone is in Ibiza or Brighton or Blackpool, actually, everyone is watching the Euros, so who cares for the moment.

That Hartlepool have former FA poster boy Paulo DiCanio (no disrespect to Neale Cooper) and a mega wealthy backer (Alan Sugar say) doesn’t matter, so say the FA and FL. No, the club didn’t buy their way up, they’re there because, well, just because. Two down, 22 to go. The week before the season kicks off, it’ announced that Peterborough United are gone. They owe more than 1million euros and hadn’t paid it off by the 4th of July deadline. So their coach is now free to speak with newly minted Forest.  Mr. MacAnthony declares it a disgrace, however the local government and supporters don’t care about the club, so it’ over. Twenty one teams kick off the new season and nobody followed anything as it’s not important. That an agreement was in place for Hartlepool to go up before they were offered a place after Leicester’s demise doesn’t seem to matter.  We all want football and we want it now. Rumours abound that at least one more club is barely alive and may not resume in the New Year.

Replace Middlesborough with Kamaz Naberezhnye Chelny, Hartlepool with FC Ufa, Birmingham City and Aston Villa with FC Nizhny Novgorod and FC Volga Nizhny Novgorod, Leicester with Dinamo Bryansk and Peterborough with Torpedo Vladimir. Replace Paulo DiCanio with Andrei Kanchelskis, the English Football League Championship with the Russian Football National League and 24 to 21 teams with 20 to 17, and you have the situation here. The second tier has long been regarded as the graveyard of Russian football.  Clubs wilt and die under the pressure. Those who stay more than two seasons invariably run into financial difficulties. It is like the 500-300 world rankings in tennis, if you’re there for more than a year, you’ll stay there or drop. The list of clubs who “chased the dream” of Premier football and are now extinct, or reformed and a division or two lower, is quite long.  Even going up to the top flight means little with paltry tv revenue, poor attendances and hard to find sponsors. In Ireland we laughed when Richard Dunne had to have a five drawn on the back of his shirt. Imagine a Premier league club, playing in a Cup Semi-Final, against “favoured” opposition and needing every break you can get. Then your kit supplier tells you, the morning of the match, that your special edition kit won’t be released until you pay the five figure sum you owe from the season before.  You don’t have and can’t get the money. You phone the club to find that nobody is in, they’re on strike due to unpaid wages, so the wife of a friend goes to the club, bribe someone to let her into the kit room and gather up what she can for the drive to Moscow. The kit isn’t washed, but it doesn’t matter. You go out and every decision goes against you, especially after you take a well deserved lead in the 19th minute and that only a penalty that never was and an outrageously unfair (and foul ridden) build up to the winner denies you a place in the final – to make money, pay off debt and get into Europe.

The top flight of Russian football looks more restricted than it ever was. No team east of Perm (who are in trouble each year) so that the largest part of Russia is unrepresented. The Volga and Urals region looks stronger than ever (at all levels) and the Moscow clubs should all do well. Zenit were looking the team to beat, though their pre-season form has been patchy, same with CSKA. Anzhi, the supposed moneybags club, are hoping that Gus Hiddink will do something for them that most would say is impossible – break into the top three. They’re in Europe and this is a big step in itself. The loss of Roberto Carlos did hit the club, seeing him in the flesh was an education in positioning and movement, Samuel Eto’o, despite being captain, won’t fill that role easily. The gigantic 21 year-old Ivorian, Lassina Traore, has joined the side and having witnessed him cause havoc last year against Spartak, he’s due a move to an even bigger league soon.

After Zenit there should be a chasing pack of Spartak, CSKA, Rubin and Anzhi.  Dinamo look weaker, though Lokomotiv will push for the top five. Alania, Terek, Rostov and Mordovia will struggle, along with Samara and FC Krasnodar, the rest will play for survival in mid-table. Below the Premier there will be more fun and games, and the second divisions will gobble up whatever players are cut and drop their way. With Capello now in place, the whole establishment are clapping themselves on the back. No matter that the state of domestic football is at it’s weakest in a decade, nor that Premier Academies are churning out dross that do nothing to renew their pro teams. Russian football was shown up for what it is in Poland – flash, inconsistent and basically all fur coat and no, well, underwear. With good old Andrei Arshavin continuing to call the shots (is it a surprise that he broke the news of Cappello signing on to do as he’s told for a big pot of oligarch cash) the national team will flatter to deceive while clubs go belly up with a consistency that makes the League of Ireland look positively stable. With all the hand-wringing and Joe Duffy-esque whinging that went on over Monaghan’s demise, the cull of clubs in Russia this Summer was greeted with nothingness (outside of local grumping circles). In actual fact, if the laws (as they were applied to less favoured clubs or self-applied as by Kamaz) here were enforced in England, we’d have a severe drop off from the top down – regardless of the “fair play” financial regulations. Maybe there’s something to this swift, quick execution.

One thought on “Nothing quiet on the Eastern Front”