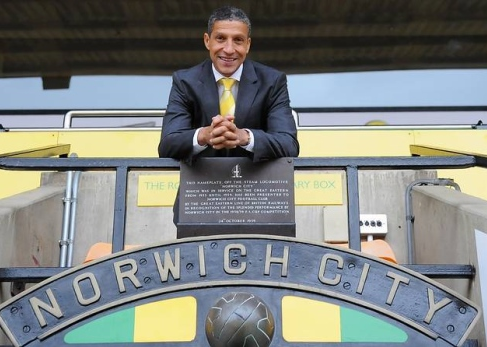 In the battle to avoid the Premier League trapdoor, Norwich City’s hard earned point at home to Manchester City has a bonus feel about it.

Considering the 7-0 mauling dished out by their visitors earlier in the season, few people expected the Canaries to take anything from this fixture – but on a day when West Brom, Cardiff and Sunderland all came unstuck, this point could prove priceless.

Just when they look like they are going to slide and Hughton’s position comes under the microscope, Norwich pick up points. It’s been a feature of the former Irish international’s tenure and one that the club’s fans hope will drag them out of the mire once again.

The point was a tactical victory for the manager – at a time when some fans are voicing their doubts. “We knew we had to have a good shape, but we knew we had to carry a threat too, which we did,” said Hughton after the match. Norwich’s tight 4-1-4-1 formation, a departure from Hughton’s preferred 4-4-2, made life difficult for a curiously flat Manchester City – working diligently to close down space and limit their visitors in attack and providing just enough threat going forward to almost nick all three points.

The Ghana-born, naturalised Norwegian Alexander Tettey excelled in the anchor role and was Norwich’s standout player. The Canaries have missed the combative midfielder who was playing only his second game since picking up an injury at the tail end of October. Tettey injected energy and fight into Norwich’s midfield. But it was his ability to maintain possession and keep the ball yellow that was most noteworthy. Norwich have struggled badly in his absence in this regard. Giving the ball away cheaply is a cardinal sin at this level, so Tettey’s return could prove vital in Norwich’s fight to avoid the drop.

Hughton will hope that Saturday’s point against such august visitors will inspire them over the next two months, a period that will most likely decide Norwich’s fate.  In their last four matches of the season, Norwich City face Liverpool and Arsenal at Carrow Road and unappetising trips to Old Trafford and Stamford Bridge. With points surely hard to come by in that run of fixtures, it’s imperative that the Canaries try to bury any relegation fears before Liverpool come to visit on April 19.

Norwich’s other nine fixtures in the intervening period feature games with seven of the Premier League’s current bottom ten – the majority of whom will also be fighting for their Premier League lives. With 17 of their 25 points having been earned at Carrow Road this season, Hughton will see the visits of Stoke, West Brom and Sunderland as pivotal. Nine points against fellow strugglers in those fixtures would deal their opponents grievous blows.