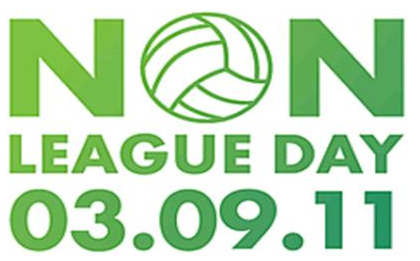 This coming weekend sees a break for the Premier League as international football takes over for European Championship Qualifiers, but for the players and fans further down the football pyramid, it is business as usual.

With this is mind, James Doe hit upon the idea of trying to persuade fans to go and visit their local team during this break and Non League Day was born. In James own words from the website.

With England playing on Friday 2nd September and the Premier League and Championship taking a week off, I urge all fans of the big clubs to get out and watch their local Non-League teams instead on Saturday 3rd September 2011!

Given the current financial climate, clubs outside the football league need all the support they can get, so your presence at a game will be genuinely appreciated. With tickets and refreshments at a fraction of the cost, what’s stopping you!

I asked James a few questions in advance of this year’s event,

How successful was last year’s Non League Day? How significant were the increases on the gates?

The general feeling is that the day was a success, enough to make us do it all again. Some clubs did do really well out of it while others didn’t. Despite this, the headline figure from NLD (as researched by the Non-League Paper) was an overall increase of 12% in the total attendance for matches in Steps 1-4 while anecdotally there were also some big crowds in the FA Vase ties which also took place. We found that the clubs and leagues which embraced the idea got the most out of it – probably the biggest gains across the board came in the step 3 and 4 leagues (Northern Premier, Southern and Isthmian) who all jointly backed the campaign.

Some of the clubs here, like Sutton United or Wealdstone, saw several hundred extra people come through the gates which marked somewhere in the region of a 40% increase. Hopefully we’ll see similar results this time.

Did clubs see any long-term growth in attendances?

That’s something you’ll probably have to ask them. Notably though, a number of clubs (e.g. Hayes & Yeading United) set up deals to attract Premier League and Football League season-ticket holders on Non-League Day and then extended such offers to every league game played since so there was obviously some benefit.

I have seen something about a three game hop organized by Blue Square. Can you explain this?

Blue Square has been very supportive of NLD since it started last year and again have thought up an innovative promotion to grab people’s attention this year. Essentially they have arranged for three teams (one from each of its divisions) who are fairly local to each other, to stagger their kick-offs to allow people to see three games in one day. The fixtures are:

There are plans for Blue Square to put on a coach and maybe even a multi-entry ticket or some kind of discount/incentive to get people to go to all three games but those details are still being ironed out. We have received a lot of interest in this, notably from overseas, so we hope the organisers at Blue Square can put something on.*

What other events are running during other international weekends?

We’ve received requests to run NLD more than once a season but we think it will detract from the one-off nature of the ‘day’. Apart from anything else, we don’t have the manpower to do it more than once a season and I doubt the media would pay it that much attention if we did. However, that’s not to say no-one should do anything. We hope NLD will act as a base from which clubs and leagues can do their own thing at international breaks and at other times too (e.g. Northern League Day took place in the spring). It should also be noted that last year’s NLD was seen as such a success by the Football League that they ‘borrowed’ the idea for the following international break last October to drive more supporters into games at League 1 and 2 clubs – whether they do it again this year remains to be seen.

With more clubs looking lower down the leagues, and the likes of Michael Kightly, Chris Smalling and Grant Holt all starring in the Premier League now after playing non-league football, there is also a chance you may see a star of the future. For more information, check out http://www.nonleagueday.co.uk/ to find the nearest game to you and try it for yourself. You never know, you might just like it and go back.

*Since the time of writing, the coaches have been secured for the Three game hop. For a £5 donation to Marie Curie, fans will be able to take the coach after the Bishop’s Stortford match and go to the other two games, before heading back to Bishop’s Stortford later in the evening. Anyone who takes the coach will also receive a commemorative T-shirt.

For information and to reserve a place on the coach please email sponsorship@bluesq.com. Normal admission will apply on the day but this means there is a chance of seeing three matches from three different leagues for the price of £38.50 with some discounts available for senior citizens and children.