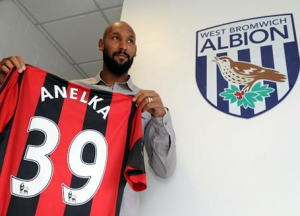 Nicholas Anelka has ruffled more than his fair share of feathers in seventeen years as a professional. His latest injudicious wobble – the use of the ant-Semitic Quenelle to mark his goal against West Ham on Boxing Day – has found its way under the skin of more offended parties than the divisive Frenchman usually rankles.

Typically Anelka’s personal indiscretions have offended only club loyalties –at Arsenal when he recklessly claimed he would sooner repair TV’s for a living than turn out again at Highbury, or the recent spell in China which ended amidst half-baked complaints of feeling ‘under-valued’.

It would take a poor judge of character to place social responsibility high on the list of the journeyman’s priorities, since personal fidelity has so eluded his chequered career to date. At Upton Park and in its aftermath those who still care enough to pay mind to Anelka took the full force of this particular brand of crass idiosyncrasy in the face.

And now the material costs of Anelka’s actions are brought to bear on his club. They may fall soon on the player’s shoulders too, with the FA’s decision on a suitable punishment imminent. Shirt sponsors Zoopla, co-owned by Jewish businessman Alex Chesterman, have already announced they won’t be renewing their association with West Brom beyond the end of the current deal which expires this summer, and for the first time in the long-narrative of high-profile racially-tinted controversies that have peppered the domestic game over the last 24 months the bill for the damage is being counted in monetary rather than simply moralistic terms. Sadly, but self-evidently, it seems to be the only way to get key figures in the game excited.

Gary Neville was in typically vitriolic voice on Monday over what he considers to be a hysterical over-reaction by the property-search service in severing its ties with the club on didactic grounds. But then Sky Sports’ latest vox-pox machine has long since been the flag-bearer for gristle-headed conservatism in cultural soccer analysis, reluctant to allow that any decision may be taken within the four walls of football predicated on anything other than the two-dimensional facts of what happens on the pitch. As though football, defined as it is by the ubiquitous presence of brands, imagery and iconography, should somehow be able to wear the badges of stomach-turning neo-fascist symbolism without taking a blow to its integrity.

But integrity is spread across modern professional football only thinly. The more millions that pour into the game the more we seem to be shouted down by apologists for infantile, pig-headed show-boating, as though a century of civic progress is to be sold out for a big-money sponsorship deal here, a 20-goal-a-season striker there (looking at you Luis Suarez, PR rehabilitation or not). Neville sees the Zoopla withdrawal as the surrendering of a good thing to the whims of an executive throwing his toys out of the pram, rather than as, say, an impassioned but careful response to a foul gesture that provokes where no provocation is due.

In some ways football doesn’t do much worse than mirror an acrid habit that cuts across social commentary at large – the peddling of the myth that words and actions are somehow divorced from the histories that birthed them and the contexts that gave them meaning. It was most evident recently when Paulo DiCanio began his doomed spell at Sunderland amidst accusations that his back-catalogue of comments and gestures exposed him as a racist and ergo an unsuitable candidate to manage a high-profile football club. The popular consensus excused DiCanio on the strength of his protestations that, in spite of the remarks that pock-marked his past, we could all rest assured that he harboured no racist views.

With Anelka now, as with DiCanio then, the proof is in the pudding. What possible meaning could these words, phrases and acts of body language have if not to communicate the ideas which gave them life in the first place? The man who declares himself a fascist but not in the habit of making racial judgements contradicts himself in the most eye-popping way – a branch of meta-semantics that strips away context from language and leaves it rudderless and meaningless.

And so for Anelka the Quennelle that attacks the (undefined, vague) system but carries no anti-Semitic barb exists nowhere but inside his own head – the short but public history of the gesture dictates so. He is accused, tried and convicted by the sheer fact of his own actions. Anelka will suffer for his deed, just as his club have already done, and Neville and his disciples will likely continue to defend the divine sanctity of the footballer to act without wider consequence. The game seems destined to remain the history lesson nobody is willing to learn.

7 thoughts on “Nicholas Anelka is a confused man”